Inside the Tate Modern

Within the galleries, one is allowed to forget the architecture and focus on the amazing collection of arresting modern artworks. As always, we were frustrated by having too little time to enjoy the impressive arrangements of works. We began with two rooms of sculpture and painting by Louise Bourgeois (1911-2010).

The sculpture of a spider we saw this week reminded us of the monumental spider sculpture that Bourgeois did for the Tate Modern opening in 2000, which was on display during our previous visit. It dominated the vast turbine hall shown in the first photo above. 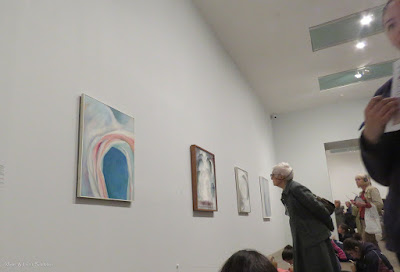 Despite the crowds, I enjoyed seeing the O'Keeffe exhibit. Her early work was well-represented, along with photos from the gallery of Alfred Steiglitz, who first exhibited her paintings in 1916. Steiglitz, who later married O'Keeffe, was a photographer and gallery owner who promoted the potential of photography as art. The exhibit included a few photos by Paul Strand, Steiglitz, and Ansel Adams. Although I've seen other O'Keeffe exhibits and her museum in Santa Fe, this was the most extensive show of her work I have seen. New to me: some paintings of Indian kachinas from her time in the Southwest.
O'Keeffe's paintings of the desert near her homes in Abiquiu and Ghost Ranch, New Mexico, and her early stay in Taos were beautiful, and reminded me of visits I've paid to the area. I very much appreciated the exhibit's addition of photos and books that set her work in context.

After the O'Keeffe exhibit, we had lunch with our friends in the Members' dining room. As they live in London and often attend art exhibits, they are members of many museums and other cultural institutions. We then had another hour or so to try to see as much as we could justify doing in such a short time.


John Heartfield was a highly political artist in Germany. The Tate's presentation of his works is extensive and very well-explained. His warnings to the German people seem uncomfortably relevant in my world today! From one of the placards in the Harfield room:

"From 1920, when he joined the German Communist Party, Heartfield’s work was focused on mocking the hypocrisy and cruelty of far-right politics. His most powerful work was made for the Communist weekly AIZ (Arbeiter-Illustrierte Zeitung, Workers’ Illustrated Newspaper). Although he showed his original photomontages in exhibitions, he always included copies of the mass reproduced magazine to show how his work addressed a wide public.

"Between 1930 and 1938 Heartfield contributed 237 photomontages to AIZ. The Nazis rapidly became his main target as he made ‘laughter a devastating weapon’ to expose their violence and fanaticism. His attacks became more urgent when Hitler became Chancellor in early 1933 and imposed anti-Communist censorship. Heartfield escaped to Prague where AIZ (and its successor Die Volks-Illustrierte, ‘People’s Illustrated’) continued publication until 1938. His cut-and-paste visual language remains fresh and immediate today, just as his challenge to Nazi propaganda still seems powerful and courageous." (source)

I can't say most of the Tate Modern captures my heart, but I would have loved to see the O'Keeffe exhibit. And the anti-Nazi work looks quite powerful.