Somehow I started reading about Royal Wedding food themes. The L.A. Times Daily Dish blog reports that 10,000 canapes will be served, and offers recipes in case you want to have a party to celebrate the wedding. Their recipes are amazing -- flavors from many, many cultures. Probably better than the real thing. Making all 22 of them would require a nearly regal kitchen brigade, I bet, though a few of them could make a nice party. 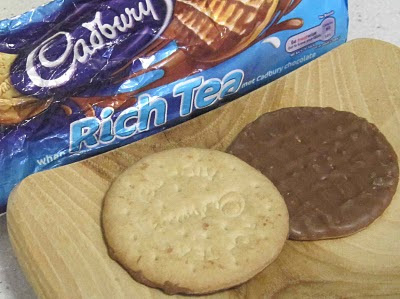 CNN has a general report on wedding events and trends, such as the Dunkin Donuts limited-edition Royal Wedding donut available only from April 24-29. Also a description of the "groom's cake" to be served alongside the couple's official wedding cake. This will be made from McVittie's Rich Tea biscuits. And for a complete discussion and history of Rich Tea biscuits -- "invented in the 17th century for the upper classes as light snack between meals and impregnating the scullery maids" -- see this at the Guardian.

What a coincidence: I have been eating Rich Tea biscuits (though the wrong brand) for a couple of weeks -- I bought them at a grocery store when we were in Ireland. In fact, in Northern Ireland, so they really came from the English realm! I can report that they are not as sweet as American cookies -- in fact, a little tasteless compared to say, Girl Scout cookies. But there you are. The Royal Groom's Cake will contain 1700 of them, as attested by this photo, supposedly: 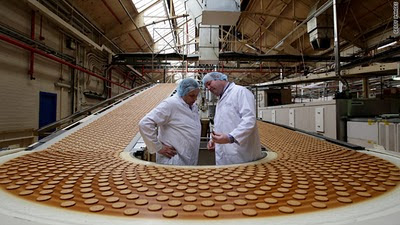 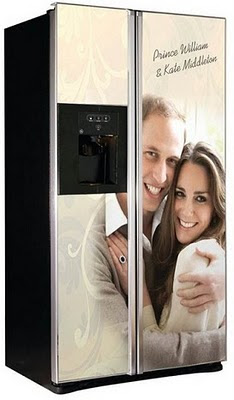 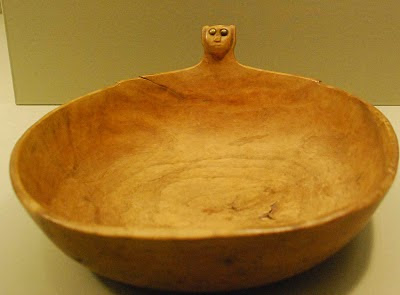 Today at the Detroit Institute of Arts we encountered E-yah, the spirit of gluttony. E-yah, an insatiably hungry spirit, appears as a tiny head on enormous wooden bowls like the two in the photos we took. These bowls were filled to the brim with food and offered up at feasts held by "an elite group of spiritual leaders of the Yankton Sioux nation in South Dakota." Ability to eat enormous quantities of food indicated a sign of spiritual power, according to the documentation (which you can see by clicking on the image).

I searched for more legends of this god and found a tale about a man on a journey who returned "looking like a specter. ... The poor fellow, delirious with hunger, fancied himself engaged in mortal combat with Eyah, the god of famine, who has a mouth extending from ear to ear. Wherever he goes there is famine, for he swallows all that he sees, even whole nations! The legend has it that Eyah fears nothing but the jingling of metal." From Old Indian Days by Charles Alexander Eastman.

A god of gluttony or famine who presides over feasts and swallows whole nations? Fascinating. Obviously the product of a very different set of experiences than that of us modern feast-or-diet humans. 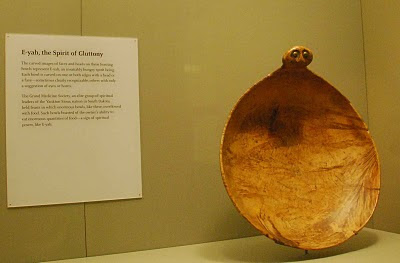 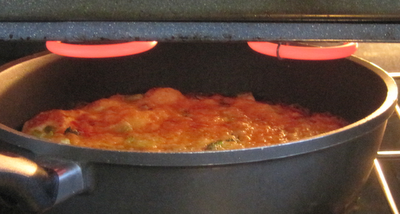 For 2 to 4 servings, depending on what else you are eating:

3 or 4 eggs
1 or 2 egg whites
1 to 2 cups chopped cooked broccoli
2 roasted peppers from a jar, cut in dice
Salt
1/4 to 1/2 tsp. smoked Spanish paprika or other paprika
1 Tb. butter
4 to 6 slices ham (one oz. slices), cut up
3 to 4 oz shredded cheese (like KerryGold Irish cheese or cheddar)

After the eggs are cooked but not entirely set, sprinkle with the cheese (which can be mixed with another 1/4 tsp. of paprika). Place under broiler as illustrated above, and cook until cheese is brown and bubbly. Watch carefully so it doesn't burn -- it takes around 5 minutes.

Allow the fritatta to set for a few minutes, cut in quarters, and serve: 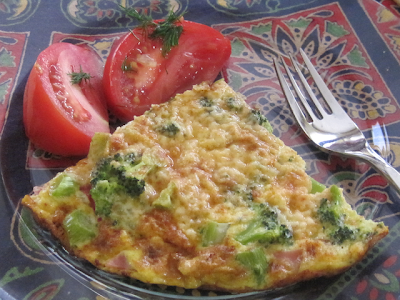 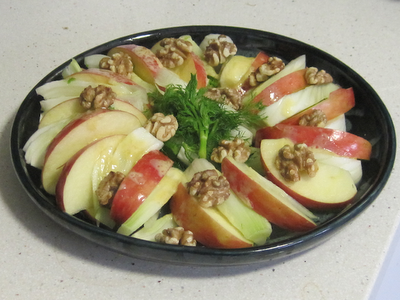 Evelyn made me this beautiful ceramic plate, which I am using for the first time. The salad is apples, fennel, walnuts, and lemon vinaigrette, inspired by an item on the menu where we ate tapas. (We didn't order this one, I was inspired by the description only.)

Another view of the plate, this time with cheese-filled (though leaking) meatballs: 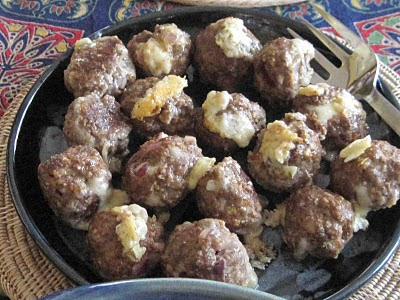 Across from the National Portrait Gallery and American art museum is Ella's Wood-Fired Pizza. Its website claims to have the best wood-fired pizza in DC. It was good but I've never been to the competition.

After seeing the portraits of many famous Americans -- especially the newest ones, including those of film stars and directors, music stars, designers, current writers, artists and many others, we went to lunch at Ella's. Then back for the famous portraits of George Washington, Lincoln, many other presidents, Chuck Close's portrait of Bill Clinton, portraits of famous civil rights leaders, and many more. I especially liked Ben Shan's portrait of martyrs Goodman, Schwerner, and Chaney.

The museum was exhilarating!

Finally, a special collection of wire portraits by Calder, whose ability to visualize and sketch in 3-D lines is amazing. He drew many art-world figures, including Ben Shan.

Here's an example of Calder's work: a 2D and 3D portrait (1929) of an art historian named Hans Curlis who made a film about Calder: 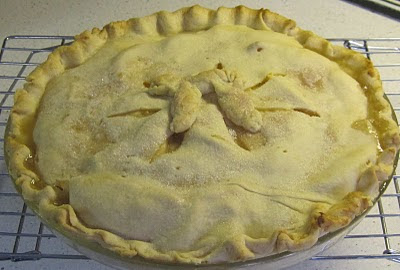 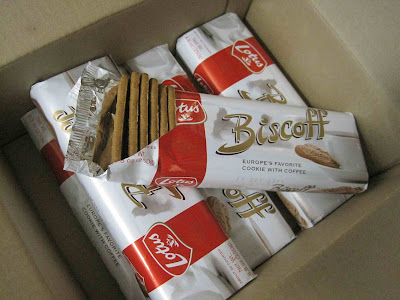 We flew to Ireland and back on Delta, with stopovers at Kennedy Airport. All 4 flights were on time or early, and the service was impeccable -- except for one thing. Only on one flight were there any of the famous Delta cookies from Biscoff, and that time I found only one single 2-cookie pack in the flight attendant's basket of pretzels and peanuts. Too bad: I really like Delta cookies.

So when I got home, I ordered several packages (the minimum order) from amazon.com, and I'm really enjoying them. I do admit that LU Le Bastogne cinnamon-sugar cookies are very similar; in fact, perhaps better than Biscoff. And my local grocer has them in stock most of the time. Still, it's fun to get Biscoff cookies like Delta would serve if they ever had any.
Posted by Mae Travels at 7:38 PM 1 comment:

Arny and Tracy's Kitchen in Galway

The house that Arny and Tracy are renting for this year in Galway has a beautiful kitchen, which gets the slanting late-afternoon winter sun. (The latitude is 53 north, so it really slants!) I helped cook one dinner there for the four of us and four guests. I used a dish towel for an apron, but all other needed objects were available. Tracy worked out a very nice spice shelf and populated it with lots of spice, as shown.

While I'm talking about the house, here's a photo of the front.

The front of the house is nearly identical to the houses of the neighbors; the gardens are all different, however. Here's the back garden in the very slanty light of a morning. The wall at the back faces a rather busy street, but it requires a mile of driving to get there unless you want to try climbing over. The neighborhood is amazingly protected!

We came back yesterday, but I'll be posting several more times to cover our very busy trip. So far, posts on my other blogs are:

Posted by Mae Travels at 4:19 PM No comments:

More seafood from Galway Bay: today, crab claws and mussels. And another fire, this time a log fire rather than a peat fire. We weren't as cold: the day was remarkably warm and perfectly sunny for wandering around The Burren.
Posted by Mae Travels at 5:32 PM 1 comment:

Moran's Oyster Cottage was a splendid place to eat lunch after a walk in Coole Park. Lady Gregory, owner of Coole 100 years ago, was often host to William Butler Yeats and his circle, and he wrote a book of poems called "The Wild Swans at Coole." (More about Coole elsewhere, later).

The peat fire was warm, and the oysters so fresh that the Moran family member who opened ours showed us a little sea worm still alive inside one. (I shuddered. A lot.) Other family members have won national and international competitions to see who can open 30 oysters the fastest without damaging them.

After lunch, we watched the swans on the water in front of the restaurant. Yeats saw nine and fifty on Coole Lake, where we saw none at all, so they must have come down here for the day.

A full Irish breakfast is mostly meat. In the tiny fishing village of Killybegs we were offered a choice of potato waffles with tomato and poached egg instead of the Full Irish. Very nice! In Dublin this morning I had the full Irish breakfast but didn't eat it all. The blood pudding was really too strange for my taste. What really impressed me though was the silver on the sideboard.

For the really good parts of the trip, including a visit to the Giant's Causeway and several fantastic Dublin museums, I'll be posting on my other blog.
Posted by Mae Travels at 5:45 PM 2 comments: