New in My Ann Arbor Kitchen 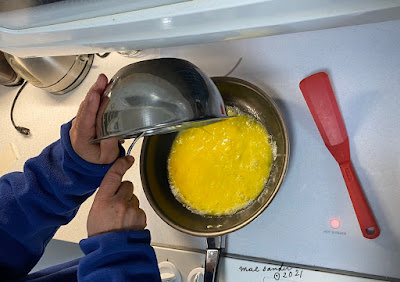 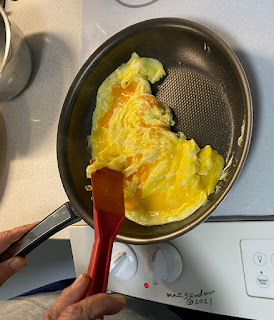 A few foods from my Ann Arbor Kitchen.

A few food highlights from our trip to the Outer Banks.

New Magnets on the Refrigerator (Of Course) 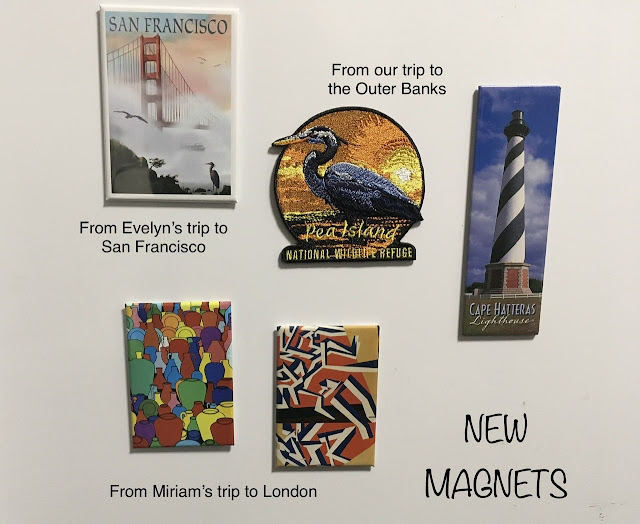 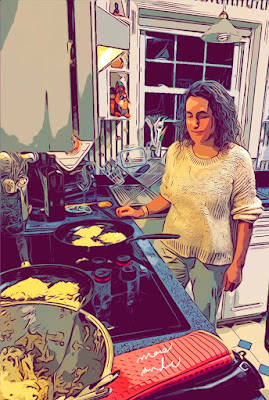 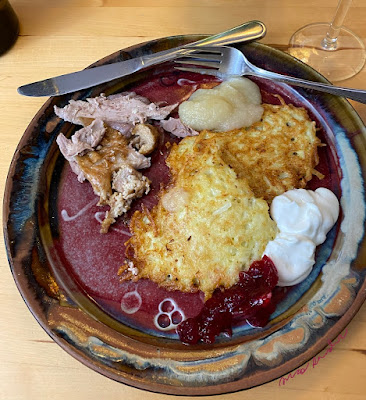 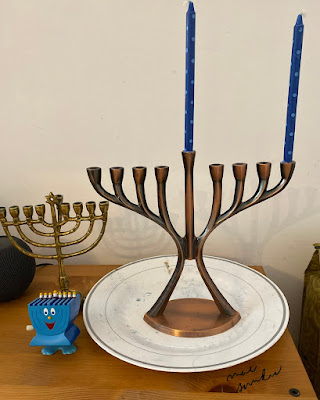 The Oil Palm and History

"... common Western misperceptions ... saw Africa as a fertile, untapped continent; Africans as untapped labor ready to work for low wages; and oil palms as a natural and largely wasted resource. Beyond indulging in racist caricatures, Europeans and Americans misread oil palms as evidence of Africa’s natural bounty—trees planted by God in a garden of Eden—rather than as signs of intensive agricultural activity in the recent past. Across Africa’s Atlantic littoral, centuries of slaving, warfare, disease, migration, and a changing climate had radically modified demography and land-use patterns, creating new villages and palm groves and leaving others abandoned. Settlers and traders weren’t stepping into a primordial forest, but a landscape with a long history of human occupation."  (Oil Palm, p. 43).

The economics of the slave trade in Africa, the Caribbean, and the American colonies that later became the USA is a fascinating story. The relationship of slavery and the sugar trade was studied in the famous book Sweetness and Power: The Place of Sugar in Modern History by Sidney W. Mintz (1986). Now there's a new book that connects the slave trade to another commodity: palm oil.
This important product comes from a few species of palm trees that originated in Africa and are now grown throughout the tropics. The valuable oil is extracted from both tree sap and from the kernel, or fruit of the tree. From the 1500s and 1600s, as Europeans explored the cities and farms of Africa, they adopted palm oil that from the trees that were already being cultivated and tapped by the people of Africa. Over time, the use of palm oil by Europeans, Caribbean people, and North Americans became more and more important.
The book describes European exploitation of African people and products, especially the slave trade and the palm oil trade:

“Defining slavery in the historical record isn’t straightforward. Like societies around the world, African societies practiced many forms of 'unfreedom' and dependency. Reports from Europeans 'anxious to eliminate slavery, and not always familiar with the intricacies of local usage,' tended to use the word 'slave' as a catchall. People who would be better described as pawns, serfs, or servants all fell under the same 'slave' label.” (p. 52)

“Before abolition, most palm oil rode along with the slave trade in the most literal sense. A surviving freight bill for the Hawke offers one example: the vessel loaded 359 captives at Gallinhas and Bassa and discharged 328 survivors at Dominica in 1777. On the return trip to Liverpool, the vessel brought back six puncheons of palm oil.” (p 75)

Palm oil has a long history, and remains one of today's very important commodities: "No other plant supplies as much fat today as the oil palm. Palm oil is usually the cheapest material available for food, soap, and a host of chemical industries." (p. 9).
It's easy to be unaware of the prevalent use of palm oil both now and in the 19th century. Over time, it was adopted for use in food and cosmetics. However, product labels did not always list what type of fat was used, so consumers were often unaware of the source. It was cheaper than other fats used to make candles as well as soap, which was badly needed by factory workers in dirty conditions.  Palm oil became critical as well in industrial development — especially providing lubricants and grease for increasingly important factory machinery and railroad equipment (later replaced by petroleum products). Pure glycerin from palm oil also became an important component of Nitroglycerin — thus being critical to the invention of dynamite by Alfred Nobel.
In food, palm oil became a key ingredient. The oil derived from the palm kernel provided an important substitute for lard and other solid shortenings, especially useful in development of margarine and replacements for other fats: "Hydrogenation allowed companies to purify palm oil and adjust its consistency, fine-tuning fat blends for winter or summer temperatures." (p. 93). Palm oil from both sap and kernel became an element in fertilizer and in animal feed as well. It also played a role in the manufacture of tin cans (removing the acid that was used to coat sheets of metal), and thus important in the increasing use of canned food in the 1920s and after.
Throughout the European colonial era in African countries, palm oil was an important commercial product, and attitudes of the colonial Europeans towards its extraction were always somewhat unaware of reality. Specifically, the planted oil palms were frequently viewed as natural elements of a forest, rather than recognizing that they were planted by human activity:

"Africa’s palm groves reflected generations of farming and management of the landscape. They were neither completely natural nor entirely human built, but rather emerged as 'a cultural creation and a lived environment.'” (p. 120).

This unrealistic view was consistent with an overall degrading attitude towards African natives. Labor was undervalued, and despite the abolition of slavery, the colonialists failed to appreciate the skills of workers who climbed the trees, tapped the sap, gathered the kernels, and produced usable oil -- all examples of heavy and exhausting work. Early efforts to mechanize the extraction process were slow to become useful or to be accepted. Similarly, colonial efforts to improve the type of palm that was planted or to change cultivation methods were also unrealistic. Further, these met with resistance because they were contrary to the interests of the native people, whose most important crops were foods like rice.
My only knowledge of oil palms in African life to this point has been the novel The Palm Wine Drinkard, by Nigerian author Amos Tutuola. This is a wonderful folk-tale style story, published in 1952. Palm wine, a naturally alcoholic sap from oil palms that lasts only a day after being tapped, is another product of these remarkable trees. As I read, I was very glad to learn much more about the history of several African societies.
In the middle of the twentieth century, changes in economics and international politics and commerce caused the colonial powers to transfer the majority of oil production from Africa to new plantations in Southeast Asia. During and after World War II, oil-containing foods were critical to the war and recovery efforts. Tropical Asian sites became and still remain the world's main producers of palm oil, now also grown in Central and South America.
In the late twentieth century, highly-processed palm oil became a source of fat for industrial food production in a globalized world. Oil palms currently supply an amazing percentage of nutritional fats worldwide: palm oil is everywhere in food, though rarely recognized. Using hydrogenated palm oil:

"Food technologists created flaky pastries that stayed tender and crisp for days; powders that stirred into coffee as 'cream;' boxed biscuit and cake mixes that lasted for months on shelves—just add milk and eggs. Instant noodles ready with a cup of hot water; peanut butter that you never, ever have to stir oil back into: these were the miracles of modern convenience food, made possible by refining, fractionating, and hydrogenating fats like palm oil. ... No one ever bought a stick of palmitin or a jar of diglycerides in a supermarket, but they ate them nonetheless in packaged foods." (p. 197)

From the last decades of the twentieth century until the present, food politics, food safety analysis, and fear of a variety of medical risks caused a series of controversies over tropical oils, trans fat, and a variety of other products. Palm oil: is it good food or poison? "By the 2000s, regulators around the world banned trans fats outright. With consumers unwilling to return to animal fats, palm oil was the only cost-effective solution." (p. 208).

Beyond food safety issues, the ecological role of palm plantations concerns many analysts. They worry about the destruction of wild animals, about an endless cycle of pests and pesticides, and about issues of deforestation. Oil palms: are they a sustainable crop or a source of environmental and habitat destruction? Also, as in the past, concern arises over mistreatment of laborers and displacement of traditional farmers from lands being converted to oil-palm cultivation.

Globalization is the final topic of the book Oil Palm. The author writes:

"Palm oil rode on earlier waves of globalization, back to the first casks shipped from Africa half a millennium ago. Long-distance trade linked Africa’s oil palms with industries and ecologies across the globe in the nineteenth century. The colonial plantation complex sent capital, people, and plants shuttling around the globe, along with palm oil and kernels. The recent era of globalization is in some ways a return to form for the oil palm industry, after a postcolonial interlude dominated by development-minded states. In this new political and economic context, old plantation firms became multinational agribusinesses; the roles once filled by 'coolie' labor were taken up by undocumented migrants. Capital poured into tropical regions as raw materials flowed out." (p. 245).

Jonathan E. Robins has written a very readable book, which looks at the oil palm from a remarkably varied number of viewpoints -- history, nutrition, globalization, politics, labor issues, and many more. Above all, he shows the importance of this often-overlooked commodity on modern life. What an interesting book is Oil Palm! 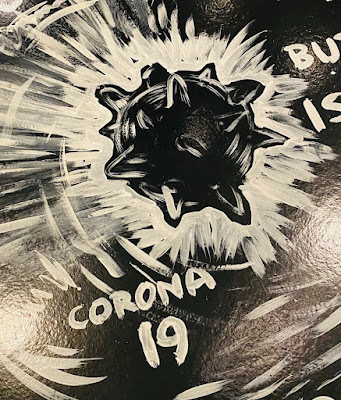 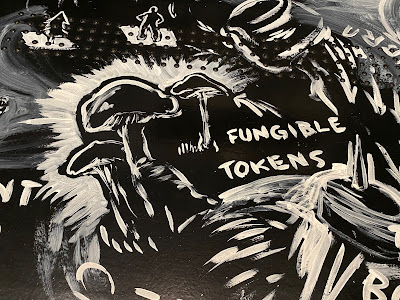 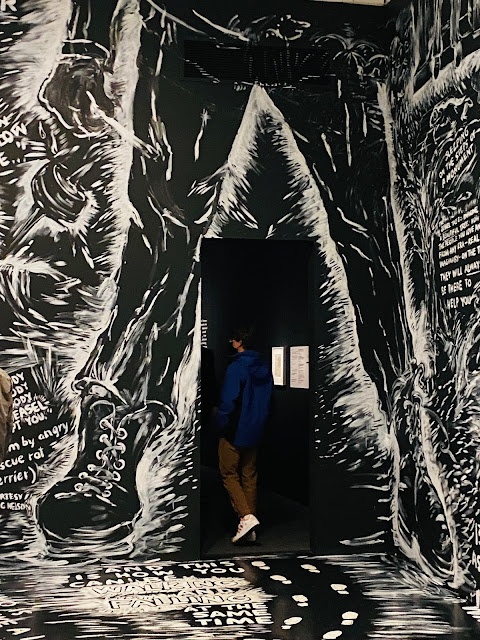 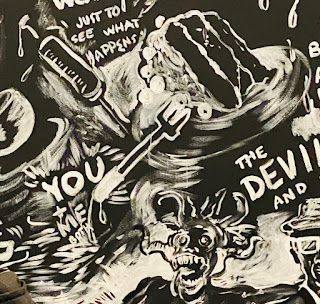 It's been a long time since I was able to visit a museum with a fascinating contemporary art exhibit. I've been so quarantined! So this was a wonderful treat, going with Len and Evelyn for just a few hours and no pressure. The Capitol Mall was crowded but fortunately not many people were in the Hirshhorn this morning.
Blog post © 2021 mae sander.
Posted by Mae Travels at 3:59 PM 11 comments: 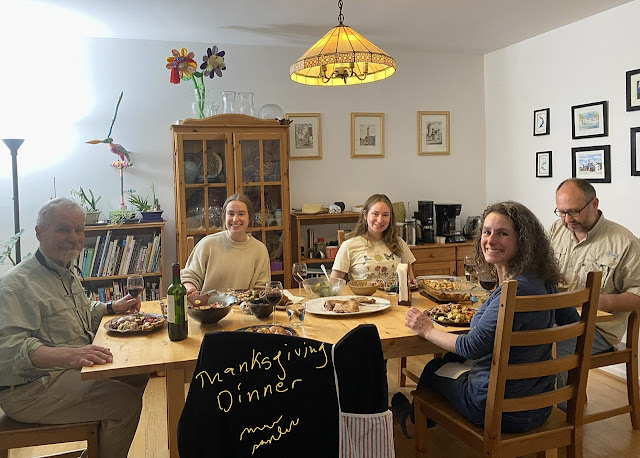 I hope everyone who celebrates is having a wonderful Thanksgiving.
We are happy to be together with our family in Fairfax, Virginia. 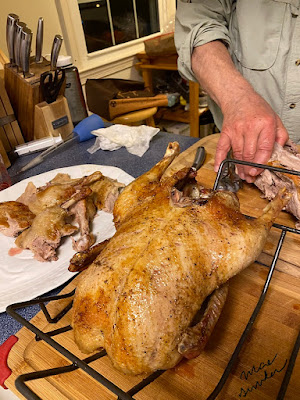 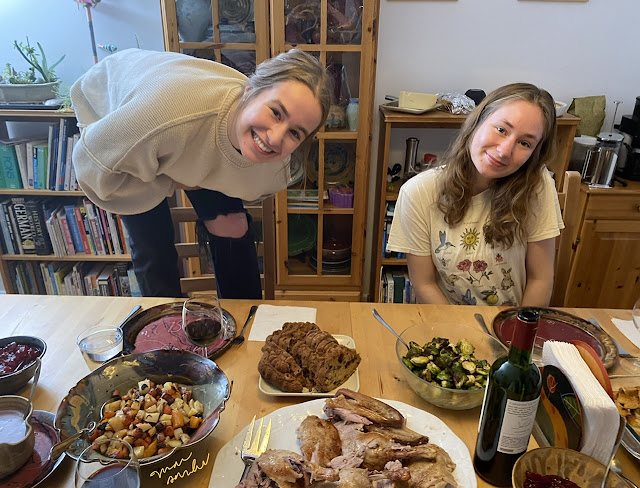 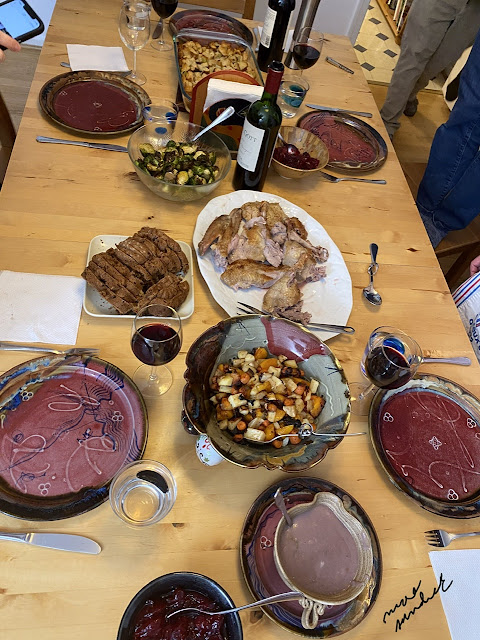 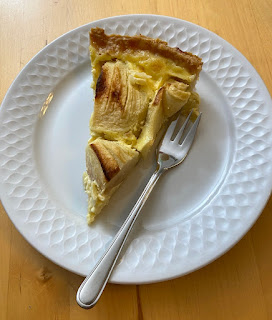 Dessert is the Alsatian Apple Tart that I described earlier today. Blog post and all photos © 2021 mae sander.