Food can be funny

Anything – even hunger -- can be funny in Ilya Ilf and Evgeny Petrov’s sprawling satire of early Soviet times, The Little Golden Calf. Bumbling bureaucrats, resource shortages, redistribution of possessions, and redefined relationships on all levels provided the two writers ample opportunities for broad humor. The novel is episodic: more or less centered around an informal group of con men and opportunistic thieves who take to the road in a car called the Antelope-Gnu. Published in 1936, and now somewhat culturally a bit alien, the novel is still full of really funny scenes.

Some chapters in The Little Golden Calf consist of sketches involving other people besides the road trippers -- people who are about to come in contact with the main group. One such diversion is titled “Vasisualy Lokhankin and His Role in the Russian Revolution” (The Little Golden Calf, transl. Fisher, p. 170 -177) It begins: “At exactly four-forty in the afternoon, Vasisualy Lokhankin went on a hunger strike.”

Vasisualy’s cause was simple: his wife Varvara had just told him she was leaving him with her lover, Pitburdukov. He says she can’t: “One person can’t leave another person if the other person loves her.” Varvara’s response: “She can too.” He vowed not to eat until she comes back, not “for a whole day. A week. A year. … I’ll lie here just like this, in my suspenders, until I die.”

She began to walk away: “I’m leaving. Farewell, Vaisisualy I’m leaving your booklet of bread vouchers on the table.” Now things are clearer even to a 21st century American: food was rationed, but he was going on a hunger strike. As she walked toward the door, he ripped up the booklet and shouted “Save me!” She began to take him seriously: “Don’t you dare keep on this hunger strike! … This is stupid Vaisisualy. This is rebellious individualism.”

He replied, “You don’t fully comprehend the meaning of individualism, or of the intelligentsia in general.” In response, she took off her hat “and quickly made an open-faced sandwich with eggplant caviar, muttering ‘crazed animal,’ ‘tyrant,’ and ‘private property owner’ all the while.”

She demanded that he eat the sandwich. He refused. “Taking advantage of the hunger-striker’s momentarily open mouth, Varvara deftly shoved the open-faced sandwich into the aperture between his little pharaonic beard and trim Moscow-style mustache.” He spits it out. “Eat, you good-for-nothing!... You intellectual!”

Wait a minute, 21st century reader. How did such political jargon get into a quarrel between a couple as they are splitting up? What’s really behind this? Lokhankin’s next gesture, while brushing the crumbs out of his beard, was to lie back down on the couch: “He really did not want to part with his wife. As well as a multitude of shortcomings, Varvara had two key advantages: a large white bosom and a job. Vasisualy himself had never worked anywhere. Work would have kept him from thinking about the significance of the Russian intelligentsia, a social group of which he considered himself a member. Thus Lohankin’s extensive ponderings all came back to the same pleasant and deeply personal theme: ‘Vasisualy Lokhankin and his significance,’ ‘Lokhankin and the tragedy of Russian liberalism,’ ‘Lokhankin and his role in the Russian Revolution.’”

Later that evening, Varvara’s lover Ptiburdukov arrived, determined to convince her to leave despite the hunger strike. She explained: “There he is! Just lying there! Animal! Vile private property owner! The thing is that this feudal landlord, this serf-owner, has gone on a hunger strike because I want to leave him.” She tried and again failed to force the now-stale eggplant-caviar sandwich on him: “Eat, you vile man. Eat, you serf-owner.”

The next morning, he said: “There, now the sharp pains in the stomach have started. … And then there’ll be scurvy caused by malnutrition, with loss of hair and teeth.” Wait a minute, modern reader! We are picking up a reference to the real results of real starvation; such starvation had been widespread during the growing pains of the Soviet system a few years before this publication.

Ptiburdukov’s brother, a doctor, was called in for a visit. His recommendation: “the patient didn’t need to adhere to any particular diet. He could eat everything. Soup, for example, or meatballs, or compote. He could also have bread, vegetables, and fruits. Fish was also a possibility. He could smoke, within reason, of course. He wouldn’t recommend that the patient start drinking, but it wouldn’t be a bad idea to introduce a shot of good port into his system... the doctor didn’t really understand the Lokhankins’ spiritual drama. Puffing up importantly and treading heavily in his boots, he left, declaring in parting that the patient was also not prohibited from bathing in the ocean or riding a bicycle.”

How do we read this? Surely we are being told that the doctor is not only not understanding the family drama, but also not understanding what foods would be available even if the “patient” were not on a hunger strike.

As time passed, the hunger strike continued. Varvara continued to stay in the apartment with her husband instead of running away. But one night she awakened from a bad dream about the doctor and discovered Vasisualy “standing in front of the open cupboard of the buffet, his back to the bed, chomping loudly. … Having ravaged an entire jar of preserves, he carefully took the lid off the pot, plunged his fingers into the cold borscht, and extracted a piece of meat from it. Even if Varvara had caught her husband at this game during the happiest days of their marriage, Vasisualy would’ve had a bad time of it. Now, however, his fate was sealed.”

She left him for good. “Lokhankin suffered openly and majestically. He luxuriated in his woe… His great sorrow gave him the chance to devote even more thought to the significance of the Russian intelligentsia, as well as to the tragedy of Russian liberalism.”

I read The Little Golden Calf as a part of my project on the city of Odessa for my other blog. Ilf and Petrov were both natives of Odessa, also the location of the apartment where Vasisualy and Varvara lived. My posts about Odessa are here.

Posted by Mae Travels at 2:57 PM No comments:

Labels: Food in Literature, Posted in 2012

A New Take on the Still Life

The fruits move around -- see this LA Times Article!
Posted by Mae Travels at 7:33 AM No comments:

Hardest recipe ever! Why? The key limes were tiny and very stubbornly held onto their juice. 21 limes were barely half as much juice as Evelyn needed, so it was a key-lime-tangerine pie. Delicious!! Note that Alice has converted her 3-D glasses to hipster glasses. And Miriam is gleeful about our decadent breakfast.
Posted by Mae Travels at 9:23 AM 2 comments:

Scenes from a Mall 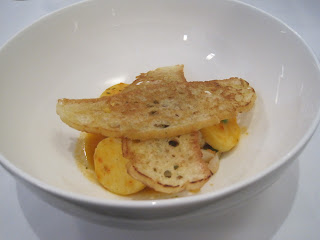 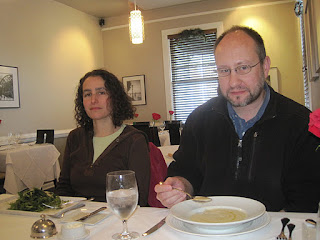 The first photo shows my delicious calamari with small discs of polenta, peas, and cherry tomatoes (mainly hidden under the thin slices of toast). Our pasta courses were all very delicious too. The second photo shows Evelyn and Tom about to have their soup and salad, and suggests the very pleasant atmosphere of this Fairfax restaurant.
Posted by Mae Travels at 8:53 AM 2 comments:

Fifteen minutes would have been enough 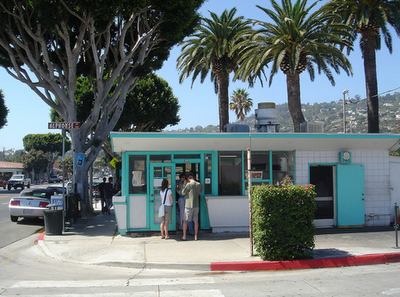 The New Yorker this week has a brief but wonderful summary -- "Julia Child's Taqueria" -- of the author's special trip to the Super-Rica Taqueria in Santa Barbara, which became a legend because Julia Child liked it something like 30 years ago.

In my mind this little Mexican diner may defy any other cultural institution as the most overrated hole-in-the-wall in America, or maybe on the planet. But note I defined this to avoid including the Iowa caucuses, which deserve an overrated category all their own.

I'm glad someone has validated my impression, which is shared by many native Santa Barbarans that I know. The everlasting line out the Super-Rica's door -- that's been there, I think, since I first tried it in 1983, or was that 2003? -- is an eternal mystery, but people keep driving up there from everywhere. Last summer I found a taqueria at random that was better and had less waiting, though I admit that the tortillas weren't made fresh by hand as they were when I was at the Super-Rica. See this post for more about the taqueria I enjoyed.

The New Yorker's image (above/right) doesn't really show the line the way it usually looks -- it often goes out the door to the right and past the back door of the tiny kitchen. Last summer we stood in line for a while, still curious to see how the place was lasting, but the pretentious conversations all around us drove us out.