New Bookcase in the Kitchen

At last: cookbooks near the kitchen desk!
Posted by Mae Travels at 12:30 PM No comments:

Mix dry ingredients together. Add eggs, milk, and fruit. Allow batter to rest for about an hour (if possible). Ladle batter onto a hot, buttered griddle. Cook until bubbles rise on the raw side. Watch griddle temperature so that the first side does not burn. When bubbly on raw side and brown on cooked side, flip pancakes and cook second side till brown. If you are making a large quantity, keep them in the oven at 170 degrees until ready to serve. 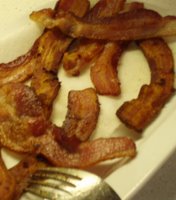 The quantity above serves 2 to 3 people. For 6 people, I made a triple batch. You can vary the amount and type of fruit to your taste, you can add sugar, and you can vary the whole-grain component to change the texture.

I also put a pancake story on the story blog.
Posted by Mae Travels at 5:31 PM No comments: 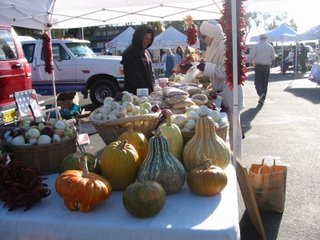 All over the Americas, the Indians grew pumpkins and gourds, and everyone knows that they introduced the early European immigrants to the New World squash family. This photo is from the Farmer's Market in Los Alamos, NM in 2004.

Pumpkins and gourds come in many forms, some hybrid or selected to be decorative, some to be useful as containers or musical instruments, some to make good food. The pumpkin that I cooked yesterday was sold as a "pie pumpkin" though I used it in a centerpiece with decorative gourds for a while. This year, I've noticed a lot of very bumpy, pimply gourds in the decorative bins, as well as the usual edible varieties: acorn squash, summer squash, and so on.

For my taste, pumpkin is much more appealing when it's used in a savory or spicy dish than in sweets like pumpkin pie, pumpkin cookies, or pumpkin cheesecake. Often when traveling, I've looked for interesting recipes for pumpkin soups or stews. In the south of France, there's a traditional recipe for a beef stew with rice and pumpkin. In Italy, pumpkin ravioli. Every Carribean island has a variety of pumpkin soup, some with pork or bacon, some vegetarian. South American cuisine also has many such recipes. I once saw pumpkin soup advertised on a restaurant placard in Canberra, Australia, and have seen it on fall menus throughout the US.

Yesterday, I made a sort of hybrid soup, using what I had on hand in the house: bacon, onion, red pepper, and a few green beans. After trying varieties over the years -- from a chile-flavored soup full of meat and vegetable chunks to a smooth puree of pumpkin, orange, and ginger -- I enjoyed going off on my own tangent.
Posted by Mae Travels at 3:33 PM No comments:

On my story blog, I've been writing about pumpkins for Halloween (as well as about pumpkinheads, costumes, parades and trick-or-treaters). So tonight I took one of the pumpkins that's been decorating the house and I made pumpkin soup. Here it is: 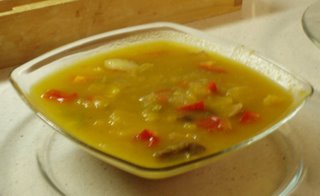 I made it from this pumpkin: 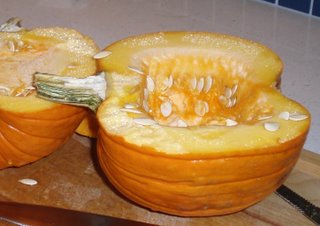 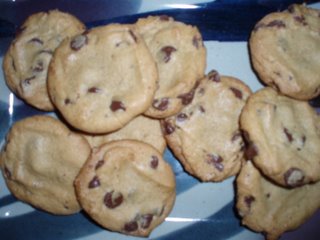 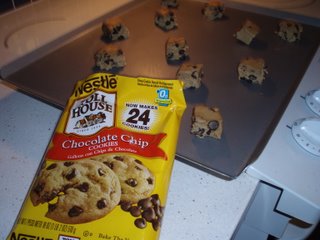 Posted by Mae Travels at 3:07 PM No comments: