Life as Advertised or Real Life In My Kitchen 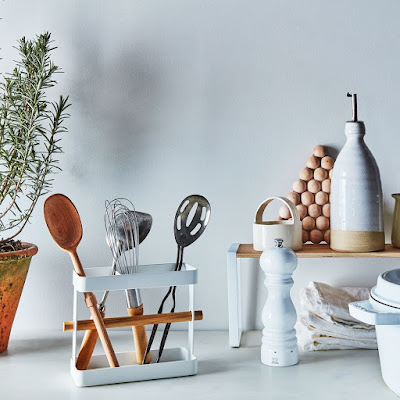 Have you ever noticed how ads for kitchen utensils seem to show them arranged as works of art, not tools for cooking? Look at this photo -- three beautifully arranged spoons and one whisk. Nearby a few other miscellaneous items, not all identifiable but all very decorative, and I believe all for sale. Or maybe this is one of the many supposedly helpful illustrations for articles that explain how to have a perfect kitchen by getting more organized and throwing away stuff. For some reason, I have been saving these idealized photos all month. What does this have to do with cooking in real life? 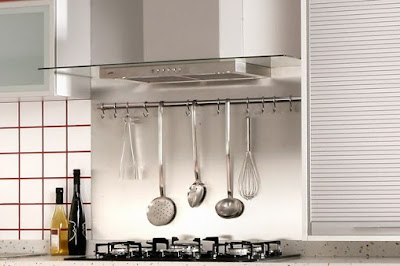 In real life, who could use a kitchen like these? If you were to hang your utensils above your stove, they would soon be covered with grease even if you had a very fancy hood above the burners. At least they would be greasy if you actually used the stove for cooking.

This is my contrarian view of the idealized, minimized, sanitized, advertised kitchen as opposed to my own kitchen (and maybe yours)? I cherish my practical and disorderly style.

I'm sharing this with the once-a-month blogger celebration called "In My Kitchen." Each month, I like to look back on my kitchen stuff and kitchen thoughts, and I look forward to seeing what other bloggers around the world have in their kitchens. Although I enjoy ads, I see them as fantasies. I try to keep a realistic view of what it means to be alive and cooking! To see what other bloggers are sharing, here is Sherry's post with a linkup from other bloggers.

Note: Kitchen advertisements are from Food52, The Container Store, HGTV, and Crate & Barrel. 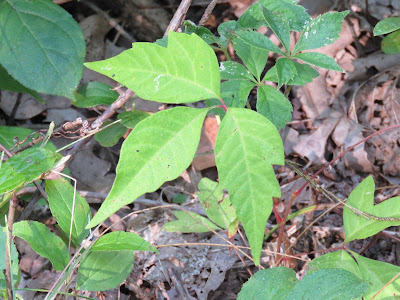 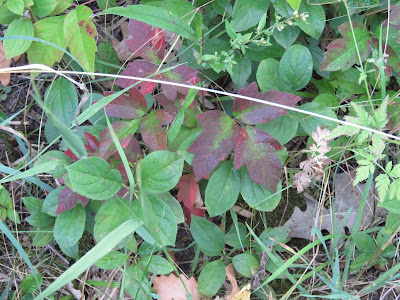 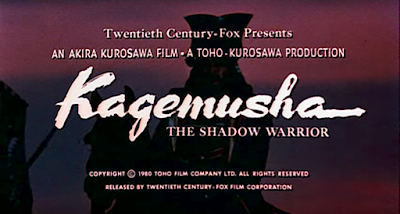 Classic film of the evening: "Kagemusha" -- here's Roger Ebert's wrap up of this beautiful (though long) movie:


"The film ... is simple, bold, and colorful on the surface, but very thoughtful. Kurosawa seems to be saying that great human endeavors (in this case, samurai wars) depend entirely on large numbers of men sharing the same fantasies or beliefs. It is entirely unimportant, he seems to be suggesting, whether or not the beliefs are based on reality -- all that matters is that men accept them. But when a belief is shattered, the result is confusion, destruction, and death. At the end of Kagemusha, for example, the son of the real Lord Shingen orders his troops into a suicidal charge, and their deaths are not only unnecessary but meaningless, because they are not on behalf of the sacred person of the warlord.

"There are great images in this film: Of a breathless courier clattering down countless steps, of men passing in front of a blood-red sunset, of a dying horse on a battlefield. But Kurosawa's last image -- of the dying kagemusha floating in the sea, swept by tidal currents past the fallen standard of the Takeda clan -- summarizes everything: ideas and men are carried along heedlessly by the currents of time, and historical meaning seems to emerge when both happen to be swept in the same way at the same time." (See review of Jan 1, 1980) 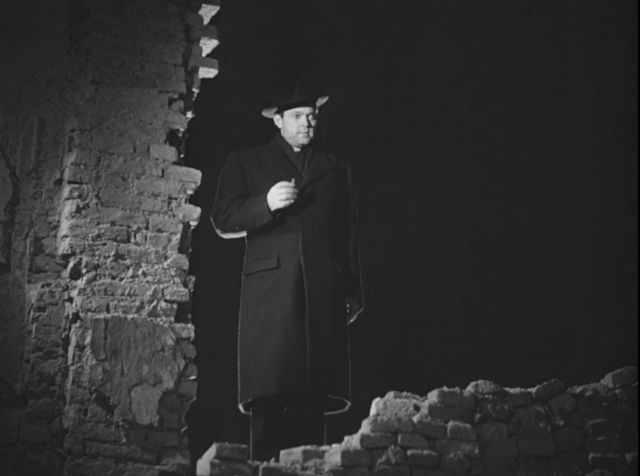 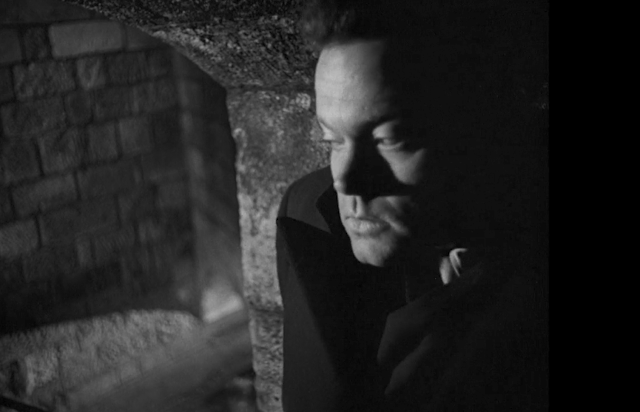 Above all: the cinematography is unbelievable. There's not much I can add to the admiration that's been going on since 1949, but like most viewers, I especially appreciated the camera angles that slanted the scenes, creating amazing patterns. The imagery of dark interiors, nighttime scenes, and the twisty and unpredictable paths through the sewers of Vienna, not to mention the iconic image of the ferris wheel -- all are vividly memorable. The cinematographer Robert Krasker received an Oscar for "Black-and-White Cinematography." 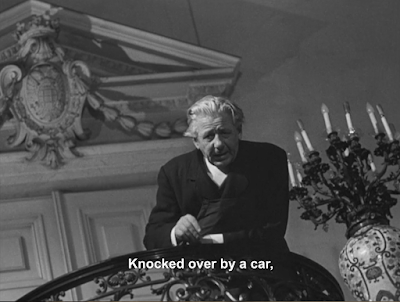 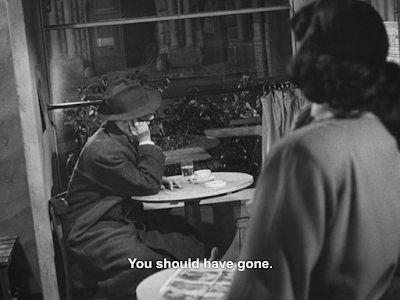 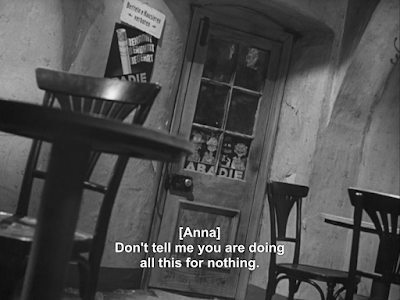 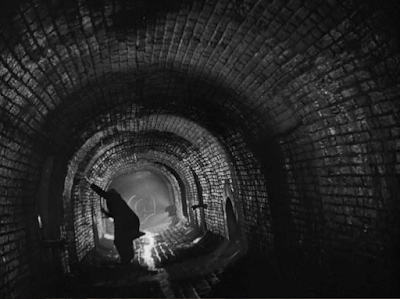 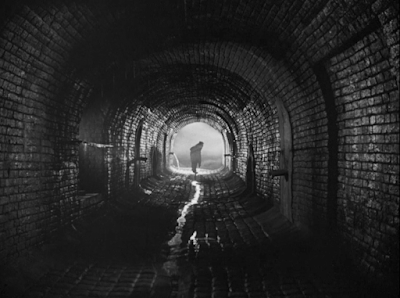 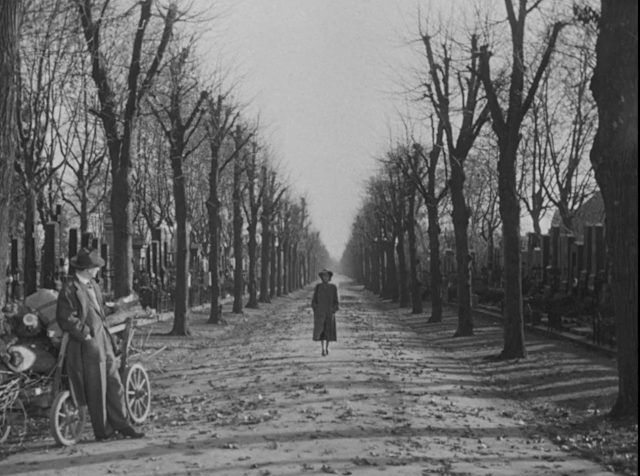 Lastingly famous people made the film a classic: director Carol Reed, screenwriter Graham Greene, producers Alexander Korda and David O. Selznick, and actors Joseph Cotten, Orson Welles, and Trevor Howard. Alida Valli, the female lead, and composer Anton Karas, who wrote the score, are not as well-remembered as the rest, in my opinion, but also critical to the film's excellence.

Throughout the film, the stark uses of black and white images reminded me of the work of Hungarian-born photographer André Kertész, but I am not aware of any actual direct influence. I suspect that the common approach to composition was characteristic of both cinema and still photography at that time.

Interesting discussion of the film here: "The Third Man" in Senses of Cinema.
Posted by Mae Travels at 11:00 AM 1 comment:

The Chef is Angry 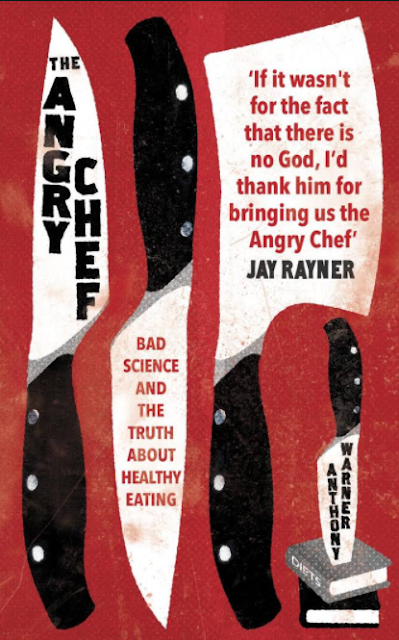 The Angry Chef by Anthony Warner is an important book, which was published in England in June, but will not be available in the US until January. I was very excited by a review in the Guardian called "Why we fell for clean eating: The oh-so-Instagrammable food movement has been thoroughly debunked – but it shows no signs of going away. The real question is why we were so desperate to believe it" by Bee Wilson. As a result, I ordered a copy of the book from England, and I'm glad I have read it. If you can't get your hands on the book yet, I urge you at least to read the review.

What makes the chef angry? He hates the fact that large numbers of people are adopting truly harmful diets and food lifestyles because attractive -- though completely unqualified -- writers, celebrities, and bloggers are promoting them. Very few of the bogus claims are harmless. Followers of these fads may become malnourished. Some of the diet advice may foster underlying eating disorders. Adherents may harm their children by withholding needed nutrition. Above all, gullible victims of a variety of illnesses may fail to obtain rational treatments for themselves or their children. Most harrowing are the author's specific cases of people who have refused mainstream cancer treatment and died because they believed they could cure cancer through food choices.

Some of the promotors of these misguided claims are fooled by their own malarky. Others have commercial motives or just want to advance their popularity. As with many other anti-science movements in our self-deluding and celebrity-worshipping society, the reason why people fall for such con jobs is complicated. Anthony Warner does a good job of explaining a number of misguided ideas, unproven claims, outdated science, and outright hoaxes.

One extreme case he describes is "Dr." Robert O. Young, who successfully promoted a crackpot diet involving "acidic" and "alkaline" foods, and collected lots of money from desperate health seekers. Young is now in jail for several crimes including practicing medicine without a license. And in the news right now is an item that's also very relevant to the book: "Ad Watchdog Group Calls For Investigation Into Gwyneth Paltrow’s Goop" -- reported August 24, 2017, in the Consumerist website from Consumer Reports. Much debunking about this website appears in The Angry Chef!

If you have been tempted by "clean eating," detox diets, extreme food restrictions, the so-called paleo diet, or similar misguided claims, please read this book as soon as you can. You might find a better way to become healthy, you might gain insight into why you think self-styled experts can help you, and you might save money by not paying for worthless junk.
Posted by Mae Travels at 6:04 PM 4 comments:

"I say that the front of a building -- or any open plaza or field  -- which is illuminated by the sun has a dwelling opposite to it, and if, in the front which does not face the sun; you make a small round hole, all the illuminated objects will project their images through that hole and be visible inside the dwelling on the opposite wall which should be made white; and there, in fact, they will be upside down, and if you make similar openings in several places in the same wall you will have the same result from each. Hence the images of the illuminated objects are all everywhere on this wall and all in each minutest part of it. The reason, as we clearly know, is that this hole must admit some light to the said dwelling, and the light admitted by it is derived from one or many luminous bodies. If these bodies are of various colors and shapes the rays forming the images are of various colors and shapes, and so will the representations be on the wall."

Posted by Mae Travels at 5:54 PM No comments: 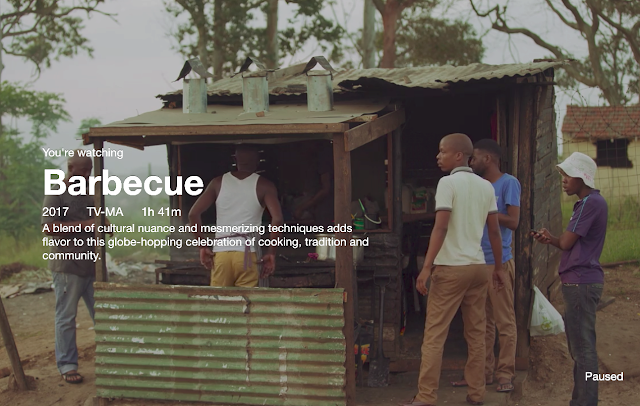 "Barbecue" is a newly-released film by Australian director Matthew Salleh. It begins with a portrayal of a South African who created the barbecue stand shown above by cleaning up a trashed corner shop. 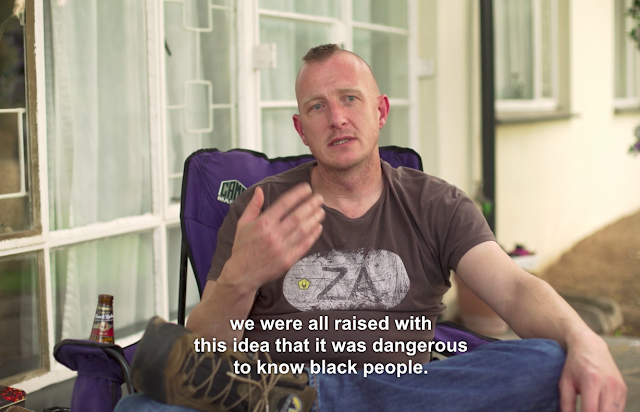 The life of the hard-working black man makes a considerable contrast with the white South Africans who are shown barbecuing and having picnics on their beautiful lawns as a social activity. Their attitudes reflect their privilege, in contrast to the working man with his hard-earned livelihood.

One unusual feature of this documentary: there's no narration, only the voices of the people who are interviewed. Sometimes their words seem a little strange and out-of-context, but on the whole it's an effective way to convey the contrasts among the 12 cultures that are represented in the film. 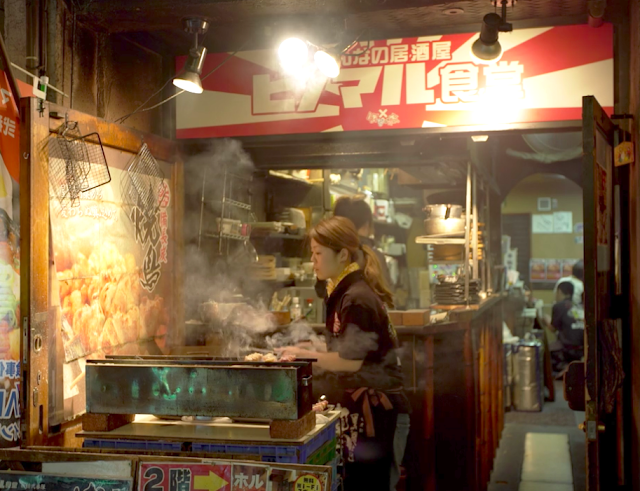 The focus jumps from culture to culture and continent to continent -- Japanese yakitori chefs, Maori pit barbecues, Mexican mescal preparation, young Swedish men & women with disposable grills, older men in Uruguay, central Texas pit masters, and many more. You watch fire-building, charcoal-making, animal slaughter, meat being chopped with axes and beaten with mallets, whole animals being placed on skewers, and much more. Occasionally a vegetable sneaks into the action, but mostly it's meat, meat, meat.

Netflix just released this documentary a few days ago. It's too long to watch in just one sitting: we stopped after approximately the first half, and then watched the rest later. Some of the segments are definitely better than others, but on the whole it's quite interesting.

Also, I found the music weird -- often it seemed to have nothing at all to do with the content of the visuals and interview topics. In one scene, you see street Mexican or South American musicians and dancers, but the music is entirely different and not synchronized or at all related to the action.