Perfect ripe apricots are splendid, like these beauties that I photographed on the deck of our apartment here in Santa Barbara. The flavor is unimaginably wonderful. I don't see them often -- not even every year, as they don't travel well.

I think this year's apricot crop is exceptional even for California -- they've been available at an incredible price each time I have gone to the Santa Barbara Farmers' Market. We have been eating them every day since our arrival -- we hadn't been here more than a few hours before our first visit to the Sunday market in Goleta. Yesterday I went to the very large downtown Santa Barbara market (more photos here).

I have only a few memories of apricots. As a child, I loved dried apricots and even canned apricots, but I do not think I ever saw fresh ones until we lived in California during graduate school. And of course I realized that the taste of a ripe apricot like the ones we have been enjoying is just not the same as any other taste.

Sometimes Michigan trees produce a small apricot crops, and sometimes there are baskets of apricots from California in specialty markets at home in Ann Arbor. Several years ago when they were in season, I found a great apricot cobbler recipe, which I remember making for Evelyn and Tom just after Miriam was born -- her birthday was last week, so obviously they were in season when I was there to see my first grandchild.

Once during our first time in California I made an apricot tart -- I must have used a Julia Child recipe, as I didn't have very many cookbooks then. The old oven in our Berkeley apartment was very dirty. Black flakes fell on the apricots before the tart was finished baking, but I removed them and we enjoyed eating it. The next day, I cleaned the oven with oven cleaner -- it took hours. Evelyn was born the day after that. Some people told me that the impulse to clean was a sign that I was ready to give birth. I think I cleaned the oven just because of black carbon flakes on my beautiful apricot tart.

Update: Elaine remembers -- My California apricot remembrance: When Dan was a baby we carefully followed Dr Spock's recommendations and peeled grapes for him and otherwise watched what he ate. When he was less than a year old, he was crawling around in our back yard, found a lovely ripe apricot that had fallen from our tree, and ate most of it before I noticed. No ill effects! This convinced me that I didn't have to monitor his food so carefully. You are right that fresh California apricots are wonderful.﻿
Posted by Mae Travels at 1:36 PM 1 comment: 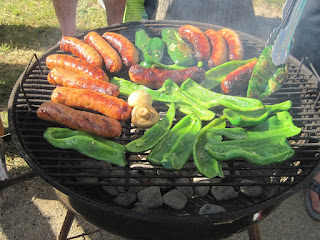 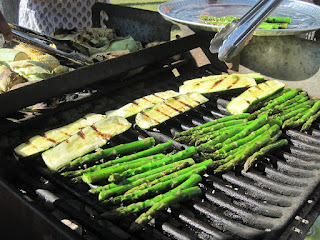 Grilled vegetables -- especially corn and asparagus -- are really a treat. Our hosts (well, ok, their graduate students who served as chefs) slathered olive oil on everything they put on the grill, which made it all crisp and perfectly blackened.

The California sun shone on us, and after dinner, many of the guests played soccer on the large lawn that belongs to UCSB faculty housing, where the picnic took place.
Posted by Mae Travels at 3:30 PM No comments:

You know you are in California

The "One Man Band" diner in the very strange town of Nephi, Utah, is a fun place to eat. The menu has a long list of instructions, beginning with the directive that you should decide exactly what each person at the table wants to eat, and then phone in your order on the red telephone beside the table (where the juke box should be, I guess). The kitchen is open to the dining room where tables are formica-topped and benches are naugahide. We watched the kitchen staff assemble the meals:

I loved the eggs, hash browns, toast, and melted cheese I ordered -- breakfast for dinner!

After we ate, we took a ride (yes, even though we drove for 8 hours today) up a mountain into the Uinta National Forest. It's amazing how Utah scenery is spectacular even when it's in an obscure place off the beaten track (like this isn't Zion, Arches, Capitol Reefs,
Brice Canyon, etc).

The Albany Bar in Cheyenne has been in business since 1942, and the building is at least half a century older than the business. I think the menu may have been updated -- though not too much. I had trout with a baked potato (the trout isn't local) and Len had a steak sandwich (maybe the cow was local). The interior of the Albany is full of old-style wooden booths and fixtures from the past -- the exterior has the typical extra-tall front pediment of a 19th century frontier building. It's across the street from the old Union Pacific Railroad Station, now a museum, and not far from the Capitol building.

For dessert, I had lemon cheesecake, which I would call New York style. I wonder what they would have served in the 1880s when the railroad station was new. Above our table was a photograph of the construction of the station with the workers standing on the partially built walls. Cheyenne history photos were on all the restaurant walls.

The Albany atmosphere contrasted with that of the very up-to-date brewpub in Des Moines where we ate dinner last night, though the menus had quite a bit of overlap, such as several Mexican-style offerings and of course hamburgers of various types (more trendy at the brewpub, naturally).
Posted by Mae Travels at 11:05 PM No comments:

Tomatoland: How Modern Industrial Agriculture Destroyed Our Most Alluring Fruit by Barry Estabrook is a very focused book. Too focused. The tomatoland he describes is in Imolakee, Florida, and almost nowhere else. The most startling fact of the book is that Florida isn't really a very good place to grow tomatoes. The soil is sandy and poor in nutrients for the crop, and there are too many insects. As a result, the big growers who have considerable political clout have received exceptions from many regulations of the use of dangerous and disgusting chemicals on their tomatoes -- bad for consumers, much worse for field workers.

The humanitarian issues of Estabrook's tomatoland include underpaying workers, cheating them of wages, exploiting their ignorance and frequent status as illegal aliens, ensuring that they are poorly housed and fed, carelessly exposing them to hazards like pesticides, and at worst, brutally enslaving them. He clearly explains that this is real and total slavery with only a slim chance of escape. He describes several lawsuits and campaigns for fairer treatment of workers, and profiles various victims and advocates. He's especially detailed about the well-known campaign to increase the pay of tomato pickers, and corporate resistance (from businesses like Trader Joe's, which I think by now has conceded) even to a token increment of a penny per pound of tomatoes.

The culinary issues are predictable: why don't tomatoes have any taste? Estabrook describes the indifference of the major growers to whether their tomatoes do in fact taste like tomatoes. He acknowledges that no mass-market, high-quantity agriculture could produce garden-ripe, fresh-picked taste -- but goes to some length to clarify that the extremes of tasteless tomatoes could be addressed, and how a few experimental labs are working on tomato taste and on preserving and incorporating genes from wild plants that grow in South America. The large-scale growers, however, just don't care. Yes, organic farmers have some success, as do farmers in other places, but the demand for a cheap product overwhelms them.

True, most tomatoes consumed in America are grown in Florida (the book is rich with statistics), and tomato-growing is an area of many important issues, humanitarian, political, nutritional, and culinary. However, I was disappointed by the lack of contrasting stories about organic farmers, farmers with alternate methods, or about farms in Canada, Mexico, or other states -- that is, the producers of the tomatoes that I actually eat when fresh local tomatoes aren't in season. He describes only one or two farms that serve a small part of the population of New York City, and a brief description of an organic farmer in Florida.

In sum, the material in this book is important, but I wanted a broader look at the tomato.
Posted by Mae Travels at 5:30 PM No comments: 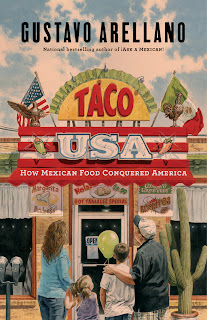 As I said in my most recent post, I couldn't resist reading Gustavo Arellano's new book Taco USA: How Mexican Food Conquered America. It's every bit as good as I expected. I liked the organization by food type. First, Arellano discusses the tamales that were sold by street vendors in many US cities in the 19th century.  Then chili, tacos, enchiladas, burritos, salsa, each becoming well-known, popular, and highly profitable in non-Mexican communities throughout the country. There's also a diversion into the history of a famous tortilla with the face of Jesus on it.

The most salient fact about each popularization, is that Mexican restaurant owners or food vendors or more recently food trucks have developed the foods for American taste, but in every case, it was non-Mexicans who cleaned up by amplifying sales. Taco Bell, the late (unlamented) Chi-Chi's, Chipotle, etc. were all the result of a non-Mexican amplifying what Mexicans had invented. There's really no implication of theft, just that the non-Mexicans seemed to have had the capital and know-how to scale a good idea into a national or regional restaurant chain -- and make a lot of money. Similarly, Arellano describes how most high-profile grocery products like Old El Paso tortillas and salsa, Newman's Own, Pace, Gebhardts, etc. were developed by non-Mexicans, based on the recipes and expertise of Mexican cooks and sauce makers.

Arellano also has a very interesting chapter called "How Did Americans become Experts at Writing Cookbooks on Mexican Food?" I never thought about this either. Non-Mexicans study regional cooking, become well-versed by interviewing Mexican cooks, and they write the books.

The book reminds me of Jennifer 8 Lee's book The Fortune Cookie Chronicles, which explores how Chinese food became so popular throughout the USA. Both authors have a fantastic grasp of the way Americans of many ethnicities think and how they form food tastes. Both present the experiences of ethnic food producers and what it means to them, not just to the consumers.
Posted by Mae Travels at 3:59 PM No comments: