Breakfast and lunch were served from a buffet. At breakfast, a chef made omelets, poached eggs, or fried eggs to order. There were lots of other choices which varied day by day, including fruit, cereal, ship-made granola, yogurt, pancakes or French toast, bacon, sausages, and many more. At lunch you could choose from several hot entrees and a varying salad bar. Far too many to try them all! An alternate lunch service was upstairs in the observation deck where you could watch the scenery while eating -- we did that several times. Afternoon tea was served at 4 PM, but we were usually either too busy or too tired to go to the dining room for this extra meal.


Dinner was served quite formally. Here are photos of three dinner courses served on various nights:
In the month of October, we were almost completely occupied with packing and preparing for the trip, traveling, and then returning home to resettle in. Usually, at the end of each month, I share a post about my kitchen with a number of other bloggers, but these photos of the Explorer represent my "kitchen" activities for the month.
Posted by Mae Travels at 6:00 AM 6 comments:

Of Naturalists and Natural History

Lichens, trees, and stubbly bushy plants display very attractive patterns and colors, but I've never become very interested in understanding their classifications and relationships. Obviously if I had to live off the land I would have a different view. Or if I were a botanist. As things stand, I usually prefer to look at the birds or animals.

While listening to talks by Dennis Cornejo, the most botanically interested naturalist on the National Geographic Explorer, though, I became more and more interested in the colonies of tiny plants and lichens that covered rocks and bare ground.

Dennis was especially passionate about lichens and other small plants, and his enthusiasm was contagious. Here is his description of his search for the sundew from the ship's online daily expedition report:


"The day continues to be beautiful and I have a mission. I know there are sundews (carnivorous plants) somewhere here. I know their associates, soft camp, a strange tiny cushion plant that covers the ground like stiff grass. I cannot see the sundew while standing, so I must crawl across the soft camp.

"I am lucky that it is sunny making the eighth inch leaves of the sundew sparkle in the light, boldly red. People returning to the landing beach inquire about my mission and undignified posture, and to my surprise become enthusiastic participants in my endeavor." (source)

All the Explorer's naturalist-guides are extraordinary people with wide experience and knowledge. They drive the Zodiac boats, help passengers get on and off safely, and find good locations for photography. Each one is a specialist in some aspect of the territory, but every one of them can identify the plants, animals, birds, and geological features of the landscape. We relied on our guides to help us find and identify birds so that we could photograph them, but we learned a lot of other things too, such as my expanded appreciation of the tiny plants in the landscape.

The very long geological history of the mountains and numerous islands with deep channels and fjords at the tip of South America is so complex that I barely understood what was being said. On Zodiac boats, we sometimes heard brief lectures about the many types of rock and how they formed under the extreme pressure at the bottom of the ocean and were pushed up by the grinding of the continental plates.

Several other natural history topics captured my attention. Clouds, for example. One day in Torres del Paine National Park the naturalists from the hotel pointed out lenticular clouds, a particular formation that appears only in mountainous areas.

In addition to talks about botany, geology, and so on, the ship's naturalist who specialized in local peoples gave a highly entertaining talk about the gauchos and gaucho culture as it still exists. Another lecture on local lore included a clip from the film "Butch Cassidy and the Sundance Kid" since these two notorious bank robbers fled to Patagonia where they had further adventures, including maybe robbing a bank.

As always, food is one of my deep interests. We didn't get to try much local food or local produce -- except for the berries of the calafate plant, similar to blueberries, which were served in the hotel in Torres del Paine. It tasted more or less like blueberries: I guessed they had frozen some of the berries from last year, as we saw only flowers. Legend has it that one who eats this berry will return to Patagonia.

Accounts of a couple of early expeditions to Tierra del Fuego contributed to what I know about this vast and complex place, including a little about the diet eked out by the natives of this hostile region. 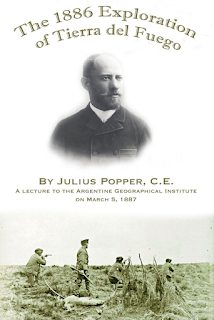 Explorer Julius Popper, who traversed the area in 1886, wrote of locally available foods, both plants and animals, which -- from necessity -- he ate:


"Bill of fare for breakfast:
"MENU:

Fortunately, towards the south of Cape San Sebastian the land was more lavish of its gifts. We found wild celery and kaiken* and duck eggs at every step, and also guanacos, but not so wild as in the north. We killed a seal which supplied us with a good quantity of oil for culinary purposes."

*NOTE: Kaiken is another name for South American geese, including upland geese, kelp geese, and ashy-headed geese. It's now mainly remembered as the name of a winery in Argentina.

Darwin's account of the voyage to Tierra del Fuego offers an impression of local foods:


"Whenever it is low water, winter or summer, night or day, they must rise to pick shellfish from the rocks; and the women either dive to collect sea-eggs, or sit patiently in their canoes, and with a baited hair-line without any hook, jerk out little fish. If a seal is killed, or the floating carcass of a putrid whale is discovered, it is a feast; and such miserable food is assisted by a few tasteless berries and fungi. They often suffer from famine."


"At dinner-time we landed among a party of Fuegians. At first they were not inclined to be friendly; for until the Captain pulled in ahead of the other boats, they kept their slings in their hands. We soon, however, delighted them by trifling presents, such as tying red tape round their heads. They liked our biscuit: but one of the savages touched with his finger some of the meat preserved in tin cases which I was eating, and feeling it soft and cold, showed as much disgust at it, as I should have done at putrid blubber." 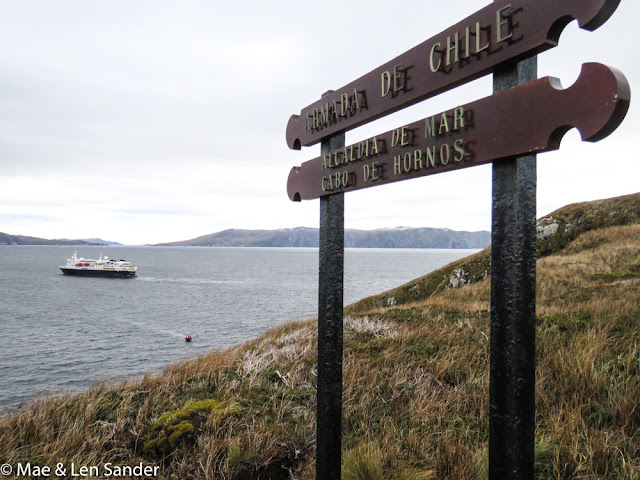 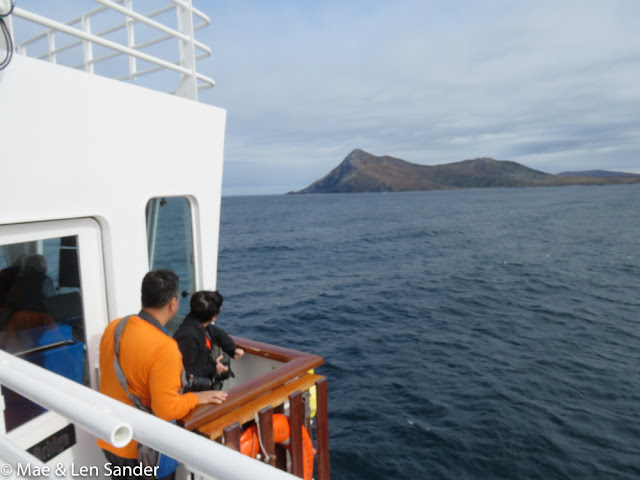 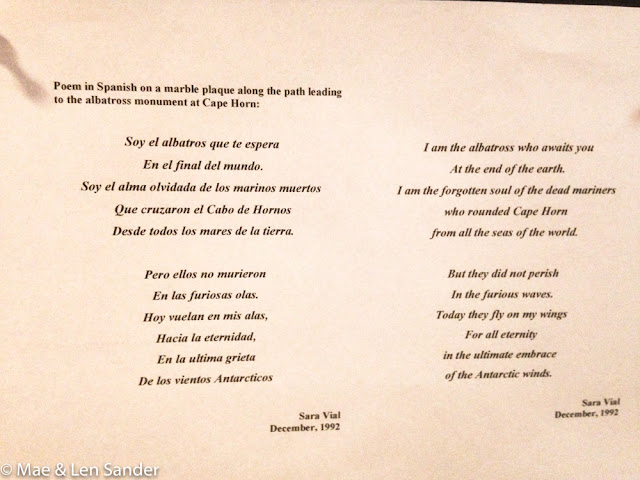 Patagonia has been home to humans for around 11,000 years. An early location where evidence of their presence is found is the Milodon Cave Natural Monument, where we stopped during the land portion of our recent National Geographic tour. The Milodon, or Giant Sloth, whose bones are found throughout Patagonia, was hunted by early people, who probably contributed to the extinction of this one-ton beast. (The Milodon discovery plays a large role in Bruce Chatwin's book In Patagonia, among other things.)

The early Patagonians and Fuegians (natives of Tierra del Fuego, the southern islands that are also part of Patagonia) were descendants of the early humans who walked across the frozen Bering Straight and over many generations spread throughout the Americas. We didn't learn much about these humans between prehistory and the arrival of the first European voyagers, starting with Magellan, and a few others including Captain Cook. I'm not sure that much is known about them.

As Europeans began to arrive in greater numbers and colonize the area during the 19th century, they found several important tribal groups living in Tierra del Fuego. One voyage to that area that's still much remembered is that of the Beagle in 1830. Charles Darwin was onboard as a companion to the ship's captain, Robert FitzRoy. Darwin's journal of their experience in Tierra del Fuego contains quite a lot of observation of the local people.

A major goal of Captain FitzRoy was to return three Fuegians to their homeland, along with a missionary to their fellow tribesman. These three had been taken a few years earlier (you might say they had been kidnapped) to be educated in English ways. Darwin's account of this part of the voyage describes how these individuals, once back to their tribe, reverted to the local ways and did not achieve the result of "civilizing" the rest of their people. The missionary stayed only a short time, as his goal appeared unachievable.

Two tribal groups in Tierra del Fuego were the Selk'nam and the Yàmana, whom I learned about in the Maritime Museum in Ushuaia, Argentina, and other sources. Some of the territory where they lived is now considered uninhabitable, and makes up the vast and fascinating natural spaces that we enjoyed seeing. I suppose this illustrates how tough these local tribes were, at least until they encountered Europeans!

The museum provided an interesting note about what they ate, a subject that always interests me:


"According to present studies, the Yàmana diet was based on sea lions. This was their main source of energy: both for proteins and calories. They also ate mushrooms, wild fruit such as Calafate, fish, whale meat -- when one ran aground on the beach -- and shellfish." (Museum documentation)

Later, as more and more Europeans arrived, the fate of these tribes was extinction. The Yàmana population in 1884 was estimated at 1000 (half their original number); by 1925 only 45 of these people remained. The causes of their extinction included introduced diseases, especially smallpox, measles, pneumonia, and TB; reduction in available food supplies, and the takeover of their lands.

Even more upsetting is the fate of the Selk'nam, who were the victims of an intentional genocide. English sheep farmers, who had taken over the area, received a bounty for the slaughter of Selk'nam tribes people. Horrible to say, the bounty was paid when the killers turned in hands, ears, or skulls of their victims.

Posted by Mae Travels at 3:30 PM No comments:

The wildlife that we saw during our 8 days on the National Geographic Explorer was very exciting to see. These marine mammals are ashore for the breeding season, and will soon leave the area to spend the southern summer fattening themselves up in the nutrient-rich waters not far from Antarctica.

Glaciers and Fjords Near the Strait of Magellan

We are home from Patagonia with our hundreds of photos and fantastic memories of a remarkable trip. Our ship spent one day moving through the fjords and glaciers of Tierra del Fuego and the Beagle Channel. Both morning and afternoon, we boarded inflatable boats -- Zodiacs -- and explored the icy waters and very blue faces of two glaciers. 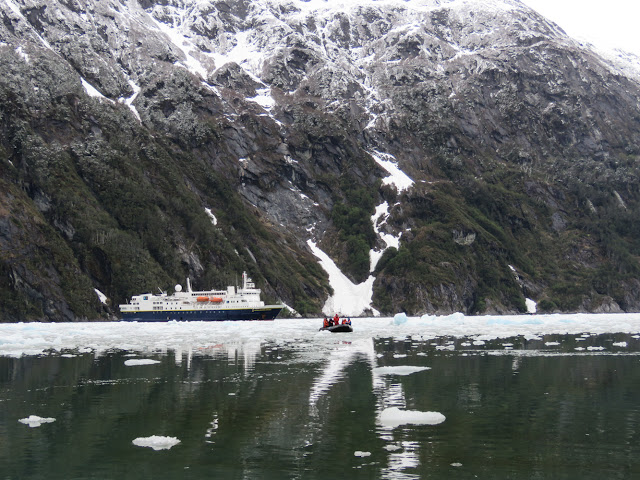