What I have on hand this week. 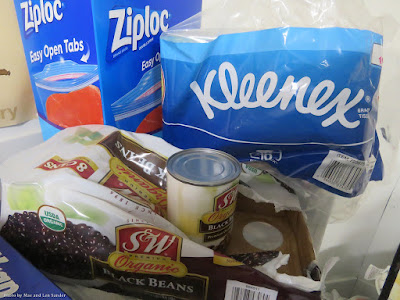 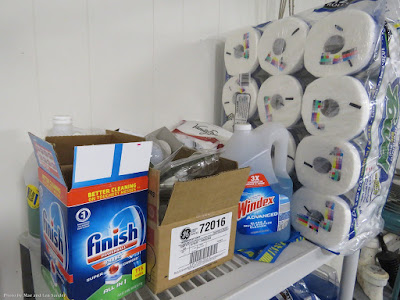 Having been away from home, and doing no home cooking for a few weeks, I'm just getting back into the habit of keeping my kitchen stocked up with food and other necessities. My iPhone reminder app has been a help keeping up with lists of what I need at Kroger's, Costco, Trader Joe's, Whole Foods, and several small local food shops. Recently, I've mainly made plain meat, salads, and vegetables, but hope soon to be more ambitious -- and soon to have some more interesting food items on hand. What are your staples?

I'm sharing this with the bloggers who participate in Bizzy Lizzie's "In My Kitchen This Month." To see the list and Lizzie's delightful photo essay on her Australian getaway: go to her kitchen post for the month HERE.
Posted by Mae Travels at 2:42 PM 13 comments: 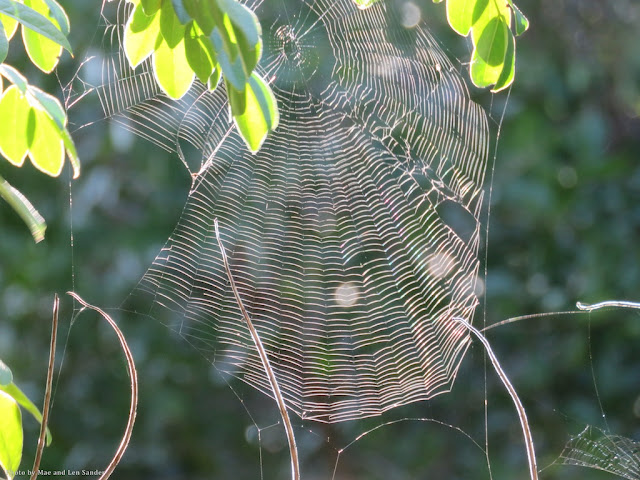 The Ministry of Fear (1943) and Stamboul Train (1932, also published as Orient Express) by Graham Greene were my reading for this weekend. I had not read anything by Greene in many years, and did not recall these novels at all. I think they appeal to me now because they depict such dark and confusing times, maybe like what's coming to us now.

The spider's web I photographed on a trail in Florida last week to me resembles the feeling of being trapped -- a feeling so vividly depicted in these thrillers. In Stamboul Train one sees the depths of the depression and post-World War I sadness, with its desperate victims. In The Ministry of Fear, it's the horrors of the London bombing raids and dangerous spy rings.

Set in London during the World War II bombing raids, The Ministry of Fear presents an atmosphere that seems completely unreal. Confusion and destruction can engulf one's entire surroundings: sudden death from a bomb or maybe refuge in the depths of the Underground and threats from unknown foreign agents. It's a world without stability.

The novel's central character, a man, stumbles into a spy plot entirely by chance, just because he is attracted to consult an amateur fortune teller as he passes by a small fund-raising fair in a London square. She directs him to guess a particular weight to win a cake "made with real eggs" -- rare eggs said to have been donated from the rations of the people who sponsor the fund-raiser. Wartime food, wartime scarcity -- what better way to illustrate such hardships? When he wins the cake, in error of course, he is followed by someone from the spy ring. At a crucial moment in his interaction with the agent, his house is bombed and the contentious cake is destroyed. He flees, and from that moment he is completely involved and enmeshed in the spy plot, and his life taken over. The plot, involving how he finally emerges from the spider-web nightmare, is somewhat forced, but the suspense is total.

Stamboul Train begins as the famous Orient Express leaves Ostend on its way through Eastern Europe to Constantinople, as they call it in the novel. Several characters who of course could never normally know one another are drawn together because they are on this train. One, a Jew, is going on business: he is a merchant dealing in currants and raisins. Somehow everyone can immediately recognize that he's a Jew, and he is very conscious of this himself. In this respect -- remember, the novel was published in 1932, so the most virulent racism was just starting -- I find the novel and Greene's attitudes both dated and somewhat puzzling. Is he straightforwardly expressing antisemitism? Is he just reflecting the unconscious attitudes of his time? Or is there a difference? I could look up what others have written but I don't want to do it.

Other characters on the train are a Communist/Socialist activist who is returning to Belgrade for a political action, a woman newspaper reporter who recognizes him and tries to get a front-page story, a woman who has been the lover of the reporter, a young woman who expects to become a chorus girl in an English show in Constantinople, and a petty criminal who has just shot a man and is trying to escape. There's a dramatic clash with border police, as well as lots of interaction among the characters.

Finally, at the end, there's a brief wrap-up when the survivors get off the train in Istanbul. Although the Pera Palace Hotel is mentioned, none of the characters stay at this famous location, about which I read a whole book!
Posted by Mae Travels at 7:49 AM No comments: 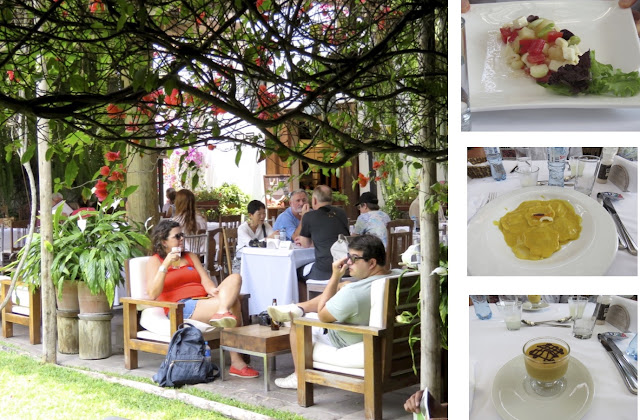 The beginning of our trip to Peru was a brief tour in Lima, where we had lunch in the beautiful garden of the Museo Larco. We enjoyed three courses: a vegetable appetizer, a dish of ravioli, and a mousse of an exotic fruit for dessert. It was our introduction to Peruvian flavors, which continued during our cruise on the Amazon during the following week.

Museo Larco, a private museum, owns a magnificent collection of pre-Columbian art, representing a number of early Peruvian native groups from several regions of the country, spanning 4000 years of history.


Before visiting the exhibits and having lunch at the museum, our tour spent a bit of time in downtown Lima. The Candelaria holiday had attracted hundreds of groups from towns and villages in the high Andes. Wearing elaborate and colorful costumes and headdresses, they participate in parades and dancing in the streets in the main square of the city. 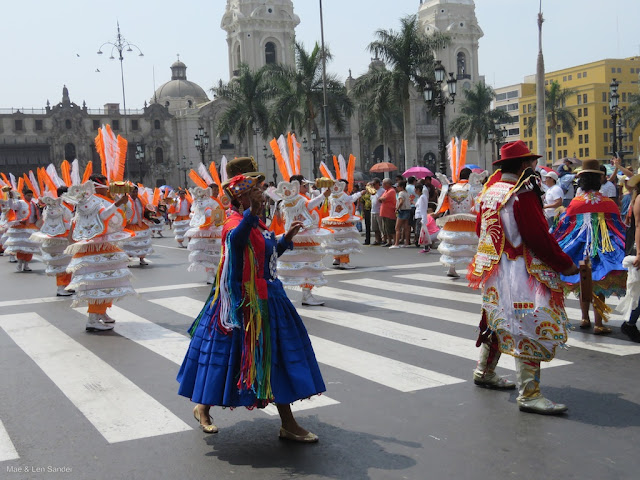 River Village Lives along the Amazon 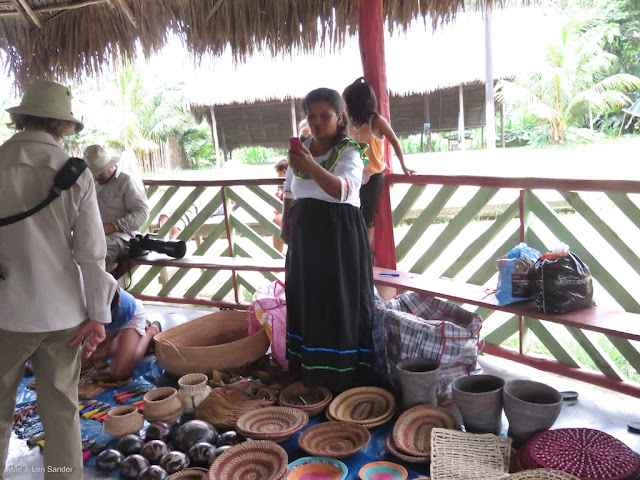 On our recent trip to the upper Amazon in Peru, we passed a variety of villages, and visited a few of them briefly or once for several hours. These are not tribal people, but modern, Spanish-speaking river villagers. The native dress (shown above) that they wore for our visit dates back around 100 years (thus several centuries after the Spaniards claimed the Amazon territory and began to rule it). The woman in the photo above, wearing native dress and checking her cell phone, is a member of a group that advocates for women's rights and more participation in the public sphere.

During our visit, the villagers showed us how they extract cane juice with a hand-press to make into sugar-cane rum. They demonstrated how they dye locally-grown fibers with vegetable dyes. From the fibers they create traditional weavings and baskets to sell to tourists. They also showed us a number of ways they are completely modern and have the same need and desire for modern goods, modern communications, and modern medicines that we do.

The village is wired for electricity, but doesn't have enough money to fuel their generators all the time. They mainly live by farming and fishing, but many of the former residents now live in the larger cities nearby and work in the oil extraction industry in the region. Their homes appear to mostly have thatched roofs and dirt floors, though I noticed several items of modern furniture and cookware. The children, who all wear modern kids' clothing, attend a modern cinder-block construction school equipped by the government, with a teacher who commutes from the nearby city, Nauta, population around 25,000.

I do not sense any contradictions in all this. 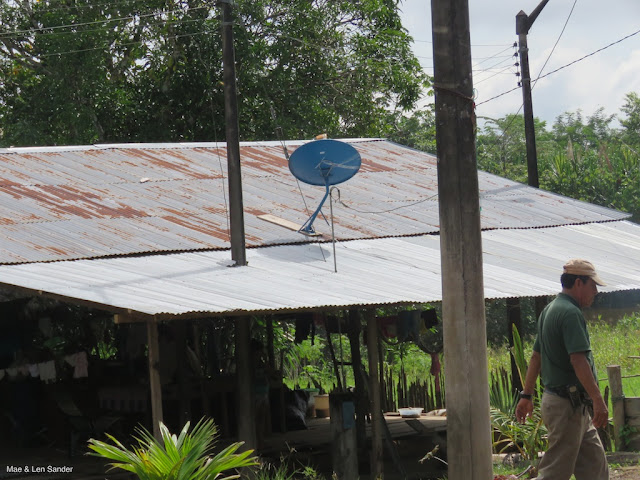 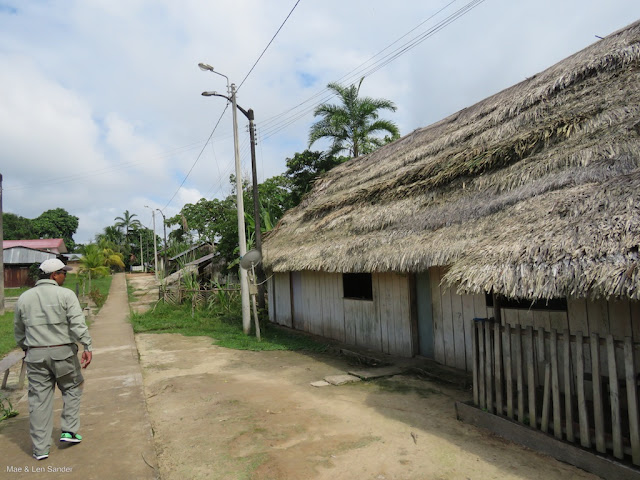 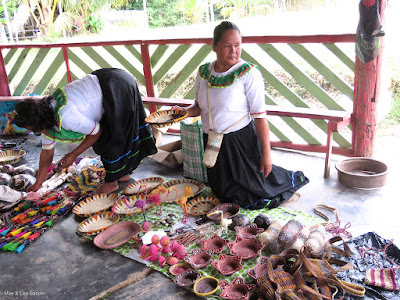 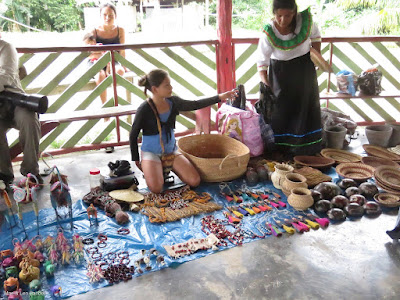 Much more primitive tribal villages exist in other parts of the Amazon, in locations that are many more days of river travel from where we visited. I read a couple of books about travel to these areas, which are much more inaccessible than the area where we enjoyed our cruise. These books tell the very painful history of the exploitation and near-genocide of many of the tribal natives, especially during the rubber boom at the beginning of the twentieth century. It's notable, I think, that the acts of the rubber barons against the natives inspired the coining of the phrase "a crime against humanity."

"Shotguns were rapidly replacing the bow and arrow as the weapon of choice among tribal hunters," wrote Scott Wallace in The Unconquered: In Search of the Amazon's Last Uncontacted Tribes. "Entire villages were relocating from the highlands to riparian mission posts in order to gain access to trade goods and remedies for deadly malaria outbreaks their own shaporis could not cure. The younger men knew some Spanish, and they’d acquired a taste for Nike shoes, Ray-Ban sunglasses, and the red-and-black caps of the Chicago Bulls." (p. 252)

Wallace's book is the story of his trip on the Brazilian Amazon in search of a fleeting glance at the members of a tribe that had had little if any direct contact with Europeans and modernized tribal groups. This was a very complex story of Brazilian politics and philosophies of how these deeply buried groups might be fairly treated. He and the expedition leaders had no doubt that modern metal tools and weapons and many other goods would be immediately useful to them, and many questions about how to give or trade these goods. There's much controversy about what would help them and what would harm them. 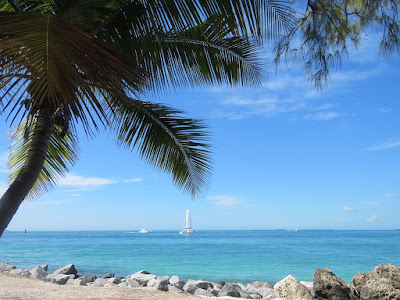 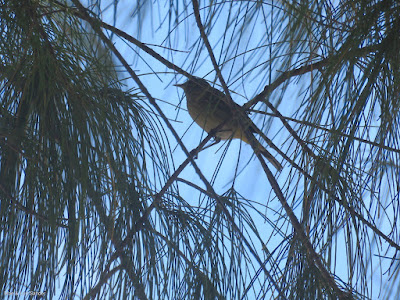 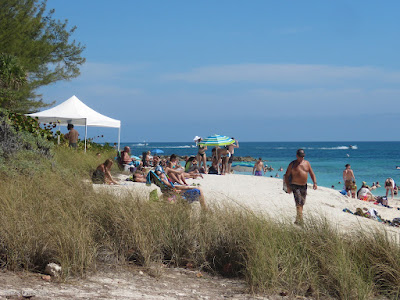