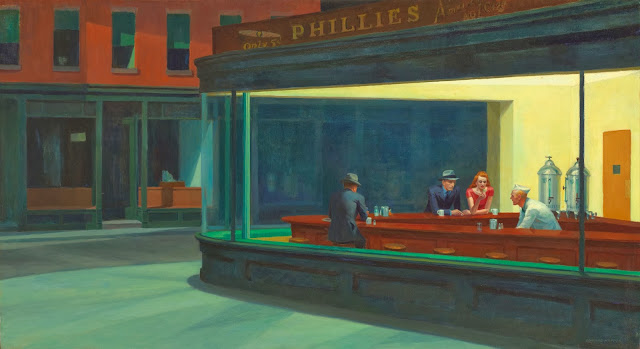 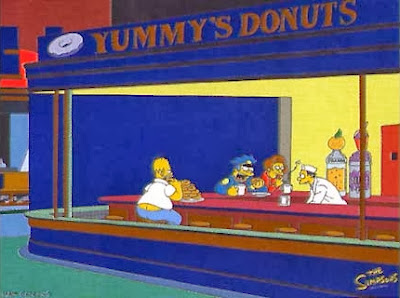 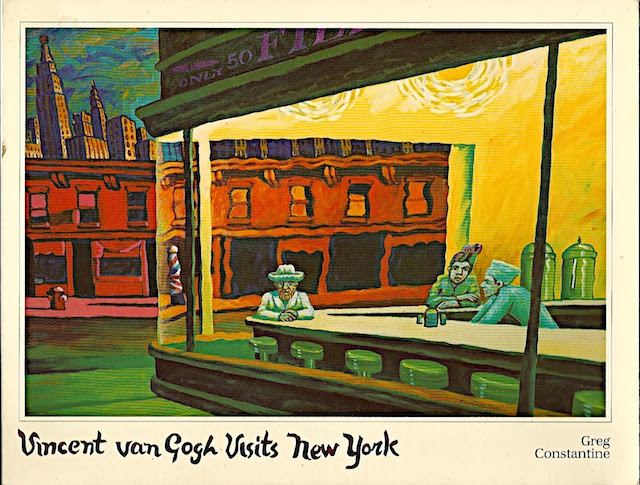 Yesterday I briefly explored the idea that the art of the twentieth century might, like the art of earlier centuries, be an interesting source of visual information about how we ate and cooked in kitchens, restaurants, and diners. My examples were drawings, paintings, and sculpture.

TV and movies in the future will surely be an even bigger help for those who want to visualize the kitchens from our recent past. Though the kitchens on film were usually idealized, there was a lot of resemblance to reality, I think.


The following kitchens don't need much more said about them ...

When we want to know what a kitchen was like in the 17th or 18th century, we take a look at the paintings and other art works of the artists of that time. Works by Chardin (1699-1779) in France or Jan Steen (1626- 1669) and many others during the Dutch Golden Age give us wonderful insight into life in those times, including lives of kitchen maids and the atmosphere of various public dining places and food-centered events. I've written about these representations of French and Dutch kitchens here and here.  Though I haven't focused on it, English tradition also includes various indoor kitchen and tavern or inn-keeper scenes from the 18th through early 20th centuries.

What about our own time? Do our great artists give us insight into life in our own kitchens and public dining spaces? Or has photography or some change in the role of art made such things obsolete?

The artist that most quickly comes to mind is Norman Rockwell (1894-1978), whose subject was everyday life in mid-20th century America. Lots of pictures show Americans at table, about to eat a festive meal like Thanksgiving, or other scenes about everyday life. I've chosen the image at left because it reminds me of the earlier artists' work where a kitchen maid might be working on some task, holding a bowl in her lap. America is of course a land without servants -- the first visible fact of this painting is that the returning soldier is helping out his mom. No question, though, it conveys a great deal about American life in 1945, which I feel no need to spell out.

Big question: is Rockwell really comparable to Chardin, Steen, and other painters of the Dutch Golden Age or of Victorian scenes? I'm not very well-educated about art theory, but I say yes, he's quite similar in many ways, not just in his choices of every-day themes and subjects, but also in his ability and power as a visual communicator. Why get more theoretical about art than that?


Edward Hopper (1882-1967) chose the interior of restaurants as his subject for at least a couple of very famous paintings. In "Chop Suey" (right) and "Automat" he shows women at the table in a restaurant. The women in "Chop Suey" are evidently having a cup of tea and a conversation, and other diners are also in the frame. In "Automat" the woman is alone, strikingly alone.  Hopper's iconic "Nighthawks" -- showing several people inside a diner -- is the most famous like these.

In a few hundred years I think people who want to get a visual impression of dining in the 20th century will be as interested in these images as we are in Chardin's or Steen's depictions of their day. Yes, there were other styles of art than Hopper and Rockwell, styles that were in many ways more dominant -- and didn't depict any dining events or kitchen interiors, or in many cases didn't depict any recognizable objects.

Here's something that fascinates me: a photo of Georgia O'Keeffee (1887-1986) in her kitchen at the Ghost Ranch in New Mexico. Evidently she loved to cook the foods of the New Mexico locals.

Did she ever paint anything about the food? I can't find anything except a few still-life studies, which I never consider to be real food paintings. She concentrated on amazing abstractions of the scenery outside her windows, as well as the close-ups of flowers and other items that were her trademark. Upon seeing the actual landscapes around her homes when I visited there, I was overwhelmed by how similar to the actual views were her representations of the barren but colorful mountains with scrubby plants and unfamiliar rocky outcroppings.

O'Keeffee was very original in her work, and exacting in her choices of subject matter. If she didn't paint scenes inside the kitchen (a lack that I can't actually prove) there were no doubt very good reasons why not. I'm glad she was an accomplished cook, along with being an artist!

As the 20th century progressed, art movements developed thick and fast. I've always found the swift progression of ideas to be fascinating. Pop art is one of my favorites, and its inclusion of kitchen and dining images is one of its most famous features. Normally, you'd think of Andy Warhol and Tomato Soup Cans. I also want to think about how it's reflected in the work of Duane Hanson (1925-1996) and George Segal (1924-2000). Hanson worked in resin and mixed media, so his works look so real that they are startling, while Segal made casts of actual people but left the gauze and other casting materials in place, resulting in ghostly statues. Both are hard to grasp in little photos, but here are a few:

I have barely begun exploring this topic, which is obviously enormous and full of additional opportunities to see what artists have made of our everyday lives. 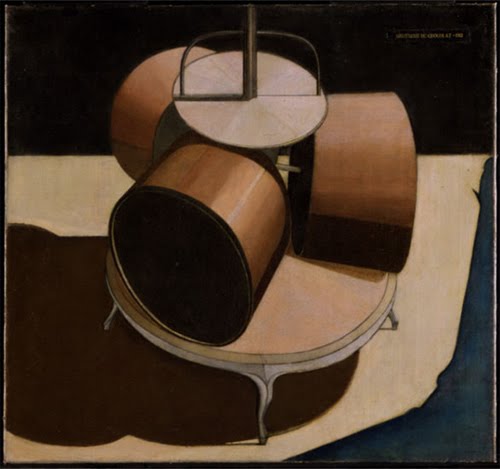 Some things at the mall are a bit surrealistic. Well, not really. Just a little over-the-top. From our trip to Tyson's Corner last Saturday ......

Sunday we had dinner at  the Senator Restaurant in the Old City of Warsaw. We were invited by our friends Renata, Marek, and Michal, after a day at the new Jewish Museum and a splendid castle. (I'll be writing about them on Maetravels.)

The traditional style of the restaurant's decor and furnishings is in keeping with the very traditional Polish menu.
There were several similarities between the Senator Restaurant, where we ate on Sunday, and the Jewish-style restaurant where we ate in Krakow Saturday. For example, both served duck in a similar style, but their pirogis and several other dishes were subtly different.

The historic food styles of Jewish and non-Jewish Poles had many similarities and mutual influences, as well as influence on the evolution of American Jewish food in the early 20th century. The excellent, crisply-fried potato pancakes at this old-style restaurant, for example, were totally familiar to me -- similar to those I make but I think they were better than mine. In America today, chicken is far more common than duck or goose, but both were frequently raised and eaten in former times in Eastern Europe, so they still appear on traditional menus, both Jewish and not. I don't know if they are also common in modern Polish home cooking.

Naturally, one wonders about how faithfully these flavors and recipes reflect the cuisine of a by-gone era when most of the Jewish population lived in poverty. Most importantly, cooks in the Jewish restaurants of Krakow obviously are reconstructing the world of a people that was annihilated. They are cooking for tourists from a variety of places, not for locals who experienced an unbroken tradition. Some of the restaurants are even frankly Israeli, advertising such specialities as hummus. Certain dishes, one suspects, are more in a Polish than in a Jewish tradition. The nature of the restoration of "Jewish culture" in Krakow leads to lots of questions.

The issue isn't limited to Jewish cultural restoration, however. In the past century the entire Polish population, including the vanishingly small number of Jewish survivors, have experienced several ruptures with their past. World War I, the reverberations of the Russian Revolution, and the independent Fascist years until 1939 when the Nazis invaded repeatedly shook up the country. World War II was incredibly destructive to Warsaw -- the entire old city where the Senator Restaurant stands was nothing but rubble in 1945, and had to be rebuilt based on photos, memories, and a few paintings by the Italian artist Canaletto.

Under communism, the Poles experienced severe shortages of all basic foods and commodities. These conditions obviously affected the types of recipes that people could make at home as well as what could appear on the menus of restaurants during those years up to 1989. Perhaps some traditions survived in the cuisine of the privileged communist authorities. But to a large extent, the cuisine and the restaurant interiors of today are restorations, based on memories and records -- perhaps with input from some of the Polish cooks who lived outside of Poland, especially in the US, during the 20th century.

All that said, I'm reluctant to make any judgements about authenticity of the food. It tasted very good to me -- in Krakow, the cooking met my expectations for Jewish food as I know it. (I've written a lot about it, but especially see this blog post about a pre-war book on Polish-Jewish cuisine.) Polish people including our hosts find this old-style cuisine, both Jewish and non-Jewish, appealing and perhaps nostalgic of some time that they remember or have heard about. And that's what counts, I think.

We have now returned home from Poland, bringing memories and many photos, material for several follow-up blog posts. I'm starting with my most fascinating food experience, eating at the Ariel restaurant in the former Jewish quarter of Krakow. We traveled to Krakow from Warsaw Saturday morning on a very early train, and returned Saturday night. 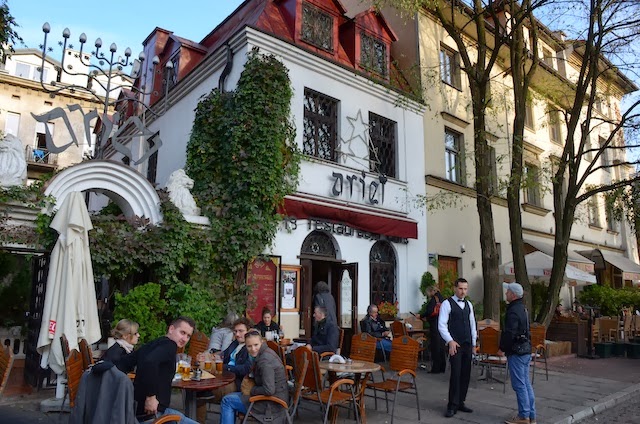 The food was all delicious, and we were delighted to have a beautiful sunny day to sit outside. In a neighboring restaurant a band was playing a variety of music to set the mood for eating old-style Polish Jewish food. Of course there are very few Jews left in Krakow, and I think the cooks, servers, and singers are all non-Jews. The music is selected for the American and Israeli tourists, so they play a lot of selections from "Fiddler on the Roof," and old Jazz hits like "Bei Mir Bist Du Shoen."

Aromas of the day 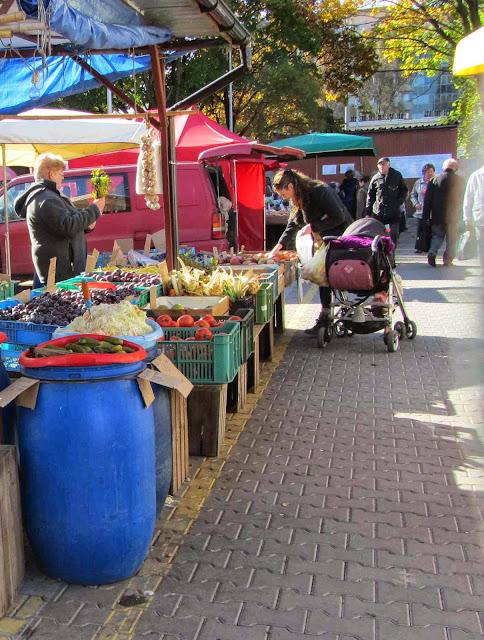 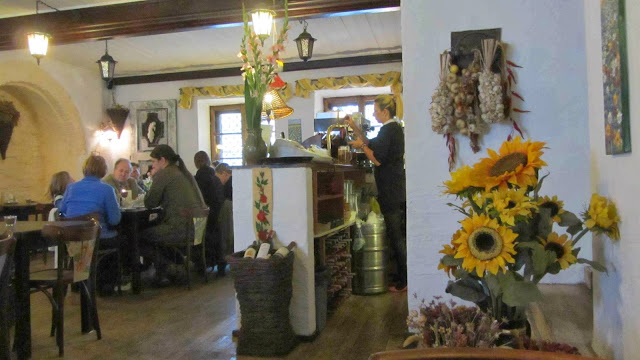 Yesterday I walked around Old Warsaw (see this) and ate lunch in a very picturesque restaurant. I tried the beetroot soup with "ravioli" -- I would have called them dumplings. Also a salad. Very delicious. I have also eaten pirogies. Last night, Len's small conference hosted dinner at a castle owned by the Polish Academy of Science -- one of the several courses was a broth with dumplings -- so lots of dumplings here. It may be several days before I manage to post photos from that.

Posted by Mae Travels at 1:29 AM No comments:

I'm done with my recent little reading project on the history of Latin American and especially Mexican food -- but I loved this slide show on the New York Times: Seeking Tacos in their Purest Form. Doesn't this look good?

My own experience eating in little taco places like this is mostly in California, but I can just taste those tortillas and the "mounting heat."
Posted by Mae Travels at 8:43 AM 1 comment: