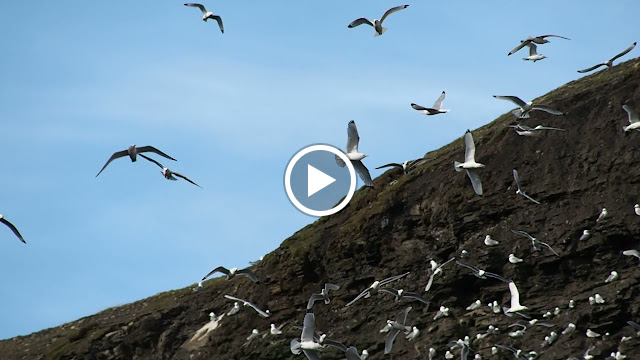 The vast numbers of birds in Arctic nesting colonies is overwhelming. Hiking at various places in Svalbard we saw a colony of kittiwakes, as shown above, and also a colony of dovekies (little auks). One morning on the ship, we approached a colony of Brunnich's guillemots (thick-billed murres). On the island of Runde, where we visited before our cruise, we saw two colonies: puffins and gannets.

As we approached each colony, whether by hiking or by sea, we first heard the racket of bird calls and saw the swirling flights of hundreds of birds. As we came closer, we could see the thousands of nests and roosting sites in niches or holes in the cliffs and observe a variety of activities in the colony. With binoculars we could view individuals a few at a time. So many birds!

It was foggy as we approached huge cliffs where guillemots nest. We could see birds swimming and wheeling over the water, and slowly could see numerous ledges crowded with birds. The ship approached amazingly close to the sheer face of the cliff looming over us.

Bird nesting colonies are all about food. Most of them are on rocky cliffs with no vegetation or other sources of nutrition for the birds and their chicks. Adult birds fly out to sea to catch fish or find other marine sources of food, returning to their rocky shelves or holes in the ground to lay eggs, keep them warm, and eventually to feed the hungry youngsters.

Predators stalk the birds; thus the marine nutrition can reach members of other species. We saw male birds get into fights over mates, grabbing each other jealously. When the fighting birds spiral down to the rocks, opportunistic glaucous gulls, jaegers, skuas, or foxes are often waiting to grab them. Some younger individuals are not yet ready to nest, but they hang around the colony with the mated pairs. I've already posted a photo of a gull eating a guillemot from the colony we saw.

Our trip was early in the nesting season; birds were just pairing up or sitting on eggs. Once they hatch, the chicks will be even more vulnerable, and no doubt provide a very attractive source of food for the predators. To avoid predators, chicks leave the nesting areas when they are quite small, pushed down to swim in the safer sea by their parents.


As I said in my post about the tundra, moss and grasses below a nesting colony are visibly much greener and more lush than the areas that don't receive nitrogen-rich bird droppings from above. These green areas attract other birds and also reindeer to eat the especially nutritious lichens, so the fish eaten by the nesting birds ultimately feed other species as well.
Posted by Mae Travels at 5:42 PM 1 comment:

Trappers and Whalers in Svalbard

On hikes from the National Geographic Explorer last week we visited several uninhabited islands. After wet landings in Zodiac boats, we walked on the tundra or on snow fields -- visitors are few, so there are no paths to follow, just open land. Birds, harbor seals, reindeer, and a fox were the only living things we saw. However, almost every hike went past at least one wooden cabin or stone building that had been the temporary home of whalers or hunters who spent the winter trapping foxes and hunting polar bears.

Trappers frequently used wood to build their huts or cabins. Although no trees grow on the tundra, and the tallest plants are a few inches high, huge logs and dressed planks are piled up on every shoreline, washed across the Arctic by currents from Siberian rivers where logging is done. This wood is critical for both building cabins and for use as fuel to heat them. In older structures if anything remains at all, it's stone...


Whaling was the first commercial activity that brought Europeans up to the Arctic. Svalbard was discovered in the late 16th century, and English, Dutch, and other whalers began to come up frequently, chasing the numerous and valuable whales that inhabit Svalbard's waters. We were lucky to see several blue whales, fin whales, and humpback whales during the voyage.

Kenneth Monsen, a Norwegian naturalist and expedition guide, was one of the memorable staff members we talked to on the voyage. Kenneth lived for a winter with his wife in an isolated trapper cabin; he gave a fascinating illustrated presentation about how they traveled to their temporary home, gathered wood for the winter, trapped and hunted for food, managed their dogs, enjoyed the coming of light at the end of winter, and generally how they lived as much as they could in the old ways.

Kenneth and his wife and children now live on a farm outside of Oslo where they raise sled dogs for racing. We asked him if trappers living together in close quarters ever became violently angry with each other -- Kenneth said "When you feel that way, you go out and talk to the dogs."

Around the ship the passengers enjoy access to lots of interesting spaces. The cabins are roomy, the lounge is comfortable and has many video screens for watching the visual part of presentations. A library and a variety of observation points are quite convenient. Zodiac landings and hikes are the high points, but one spends quite a lot of time on the ship! All the crew members and guides are willing to have interesting conversations.

Though it's cold, lunch and afternoon barbecues are often served on the rear deck...

The Quest for Polar Bears

During our week-long trip around the Svalbard islands last week, we spent many hours searching the pack ice for polar bears. The staff and crew of the ship were on the lookout day and night. They knew that most of the passengers had signed up for the trip because they wanted to see the bears.

The first two bears we saw were very far away.

All the passengers secretly hoped to see a polar bear when we landed for our hikes. The guides hoped the opposite because in fact polar bears are very dangerous. In fact, every guide carries both a rifle and a flare gun whenever on shore, and guides in zodiac boats patrol the coast watching for swimming bears, which are very hard to see. If a bear approaches the hikers, the guides first try to frighten it away, but they are prepared to shoot if the bear appears to threaten the people. They really don't want to do this!
After days of more and more impatiently waiting and hoping for polar bears, the lookouts finally spotted one that wasn't as far away, and called all the passengers to watch him (or less likely, to watch her -- most female bears at this time of year are accompanied by one or two cubs). First he walked back and forth on the ice for a while. He found some gulls that were eating a bird they had caught, chased them, and stole it. As he was chewing it, he decided to check out the ship. 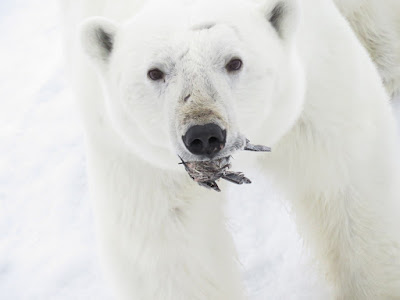 Even within the town of Longyearbyen, largest settlement on the Svalbard islands, polar bears are a danger. The sign above warns people that they are leaving the town and should always carry a gun to protect themselves. Last winter a bear wandered through the town, leaving nose prints on some of the windows of the houses. The bear raided the food supplies of the sled-dog kennels; after eating 80 kg of seal meat, he came back for more the next night. Obviously, he thought he'd found a wonderful source of food... so he was trapped and sent to a distant island.

This morning we left the National Geographic Explorer and flew back from the extreme north to Oslo, where we once again have internet access. We have our boarding passes and luggage tags for tomorrow's flight from Oslo to Detroit via Amsterdam. I'll post more details about our voyage when I get home.