In My Kitchen: Not Much!

My kitchen this month has only basic activities: not much new or sharable. However, my back yard and basement storage areas, which serve as kitchen extensions, have a few things going on. I like to wrap up each month with a look at my kitchen and many other bloggers' kitchens, all shared at Sherry's blog HERE. 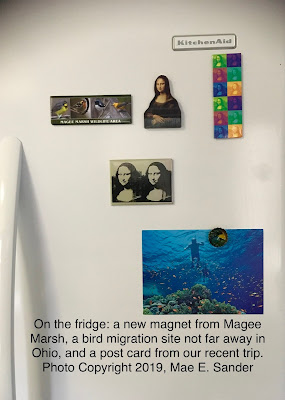 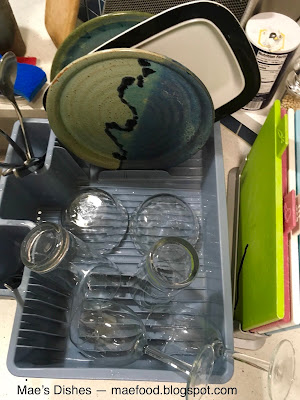 What I really don't like in my kitchen this month: washing all the dishes by hand. I had to get out an old dish drainer from underneath the sink. What I expect to like next month: a replacement for my very old and up-to-now trustworthy dishwasher. It lasted something like 14 years -- that's 98 in dog years.


All photos Copyright © 2019 by Mae & Len Sander.
Blog post created and owned by Mae's Food Blog: maefood dot blogspot dot com.
If you see this post at some other blog, it's been stolen. 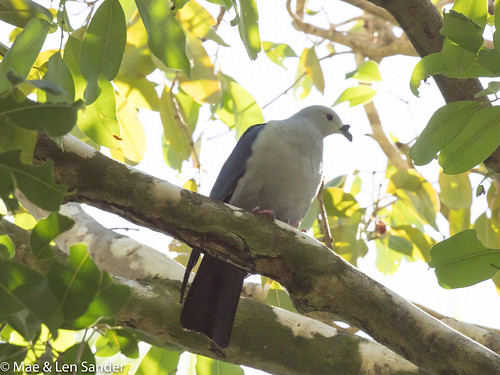 During our expedition to several Polynesian islands, we saw very few local land birds. In fact, the islands' natural history and human history has been very hard on land birds -- in contrast to other island groups like the Galapagos and the Hawaiian Islands. On one island, Makatea, we saw three endemic birds including this Polynesian Imperial Pigeon. This species once lived on a few other Polynesian islands, but is now extinct everywhere but Makatea, so we were thrilled to get this photo of it. (Note this word for Wordy Wednesday: a bird is endemic if it is found only in one native place, like this one.) 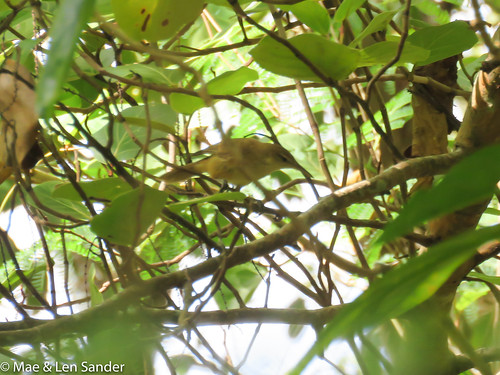 This is the Tuamotu Reed Warbler, which also now survives only on the island of Makatea. A third endemic species is a type of fruit dove, which we saw but were unable to photograph. 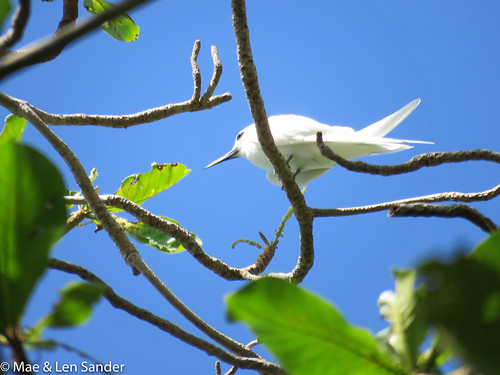 The fairy tern, above, is an oceanic species that lives in many parts of the Pacific. They are quite beautiful when they perch in the trees, as well as when they are flying. This one was on Makatea very near the beautiful fresh-water grotto where we swam through a deep cave. 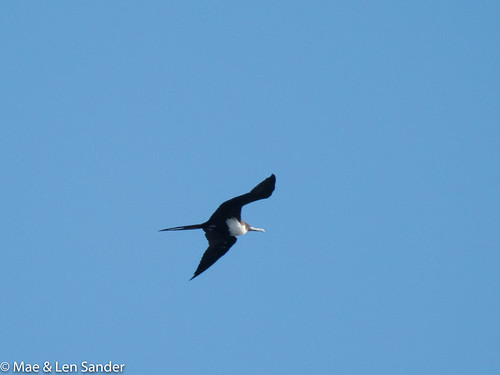 We saw many Lesser Frigatebirds, which are also found throughout the Pacific region. This one was on the island of Fakarava. All of these photos are from Len's Flickr set. If you click on one of them, you can see the rest of the birding and snorkeling photos from our recent trip.

Our Ship: The National Geographic Orion 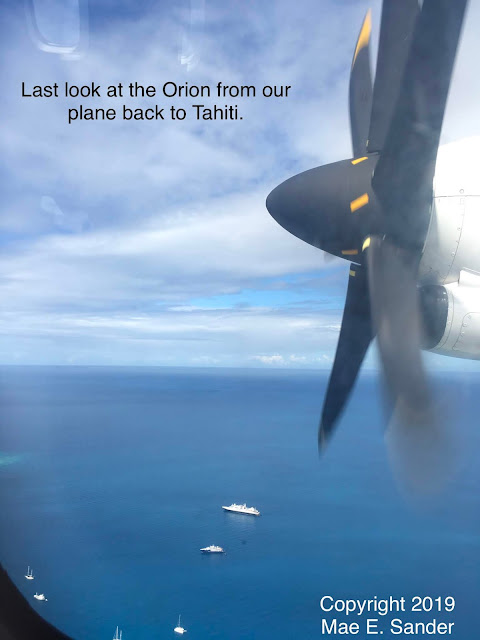 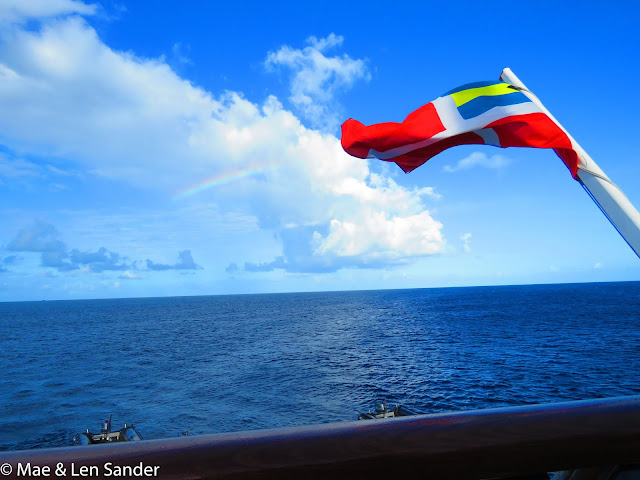 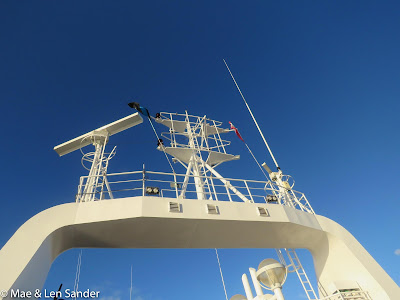 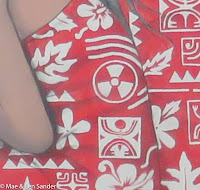 The mural in this photo was created by French artist SETH for the ONO'U street art festival in 2015. This mural has been featured on a Tahitian postage stamp, and is much loved by the islanders such as our tour guide.

Among the many traditional island symbols in the design, you can see a little international radiation symbol on the sleeping girl's back, and just above her knees you can see a mushroom cloud. As I've written, the French conducted nuclear tests there from 1966 to 1996, which polluted the islands with radioactive fallout. 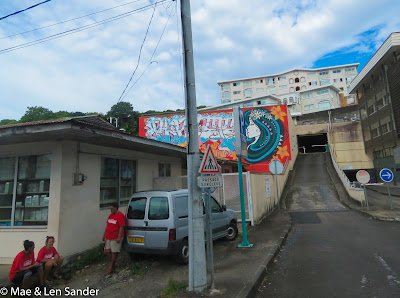 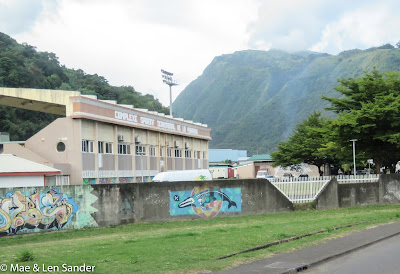 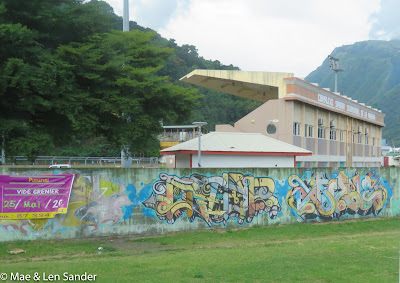 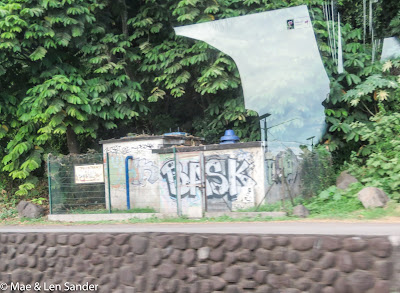 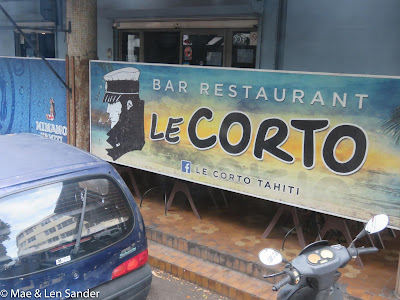 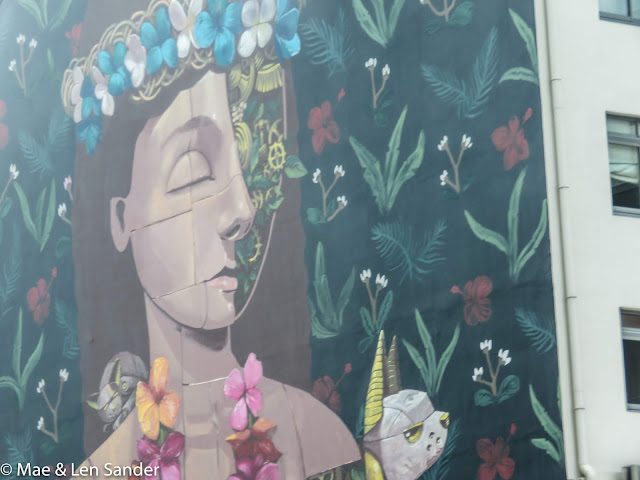 All photos Copyright © 2019 by Mae & Len Sander.
Blog post created and owned by Mae's Food Blog: maefood dot blogspot dot com.
If you see this post at some other blog, it's been stolen.
Posted by Mae Travels at 6:30 AM 11 comments:

French nuclear weapons testing is not a pleasant subject. Between 1966 and 1996, France exploded 193 atom bombs on the atoll of Muroroa in French Polynesia. Of these, 46 were atmospheric tests, from which unthinkable quantities of radiation rained down on islands throughout the South Pacific. The image of a mushroom cloud demolishing the Mururoa atoll is an icon of this era. Also iconic: the reaction of then-President Charles de Gaulle to the first test: "It's beautiful," he said. (source)

Virtually all of the French Polynesian islands, as well as some more distant islands, received multiple times the "safe" dose of radiation, including some astoundingly high radiation levels measured in samples of water, air, soil, and fish. Further, recognition of this situation has been very slow to occur. A few examples:

More shocking than the extent of radioactive fallout, in my opinion, is the extent of the French government's coverup of the radioactive results and the harm that was done to humans in the wake of the tests. Clearly by the time of these tests, a great deal was known about the dangers of radioactivity to people and the environment, so they really knew they needed to obscure what they were doing:
We encountered one example of the coverup -- or maybe denial -- in a very charming and seemingly well-informed guide who took us around one of the islands. She insisted that all of the nuclear tests had been done underwater, thus containing the radiation. And she denied that there was any increase in cancer rates due to the tests. We have no idea if she was required to say this, or if she just believed the propaganda of the French official story.


For a more technical discussion of the exact amounts of radiation see this article:

Author of this content is Mae's food blog: Maefood dot blogspot.com.
If you are reading it somewhere else, it's been stolen!
Posted by Mae Travels at 6:29 AM 3 comments:

The three food markets I saw during a walk down the main street on the atoll of Fakarava were rather small. The town has only around 800 people, with occasional provisioning visits from small sailboats and yachts, and it's almost flat, so there's little or no agriculture. In the markets, the selection of canned, frozen, and packaged goods was not that different from an American or a French supermarket. Although we drove past a number of markets on our tours of other islands, we didn't actually visit any of them.

We didn't see any fresh produce for sale. However, we heard that there had been a shipment of vegetables unloaded that morning, which had sold out immediately -- to the disappointment of some French tourists from a private boat who were ashore when we were. Unlike the larger islands where we saw small farms that raised fruit, vegetables, and animals like goats, cows, and chickens, Fakarava seemed to support only a few fishing boats to bring in food.

Historically, the islanders of French Polynesia relied on subsistence agriculture and fishing. In 1962, the French began to build a significant military presence, and also to develop tourism on the islands, which greatly altered the economy. The islands are now dependent on imported food, as we could guess even from our brief observations. According to Moody's Economic Analysis:


"French Polynesia’s tourism-dominated service sector accounted for 85% of total value added for the economy in 2012. Tourism employs 17% of the workforce. Pearl farming is the second biggest industry, accounting for 54% of exports in 2015; however, the output has decreased to 12.5 tons – the lowest level since 2008. A small manufacturing sector predominantly processes commodities from French Polynesia’s primary sector - 8% of total economy in 2012 - including agriculture and fishing." (source)

So it's interesting: these islands do not seem to be a food desert. But things are seldom as they seem; who knows? 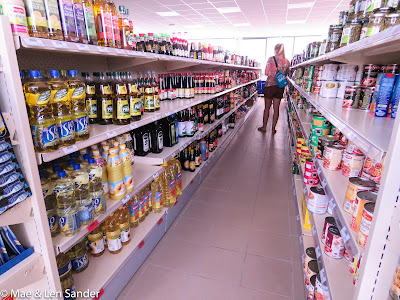 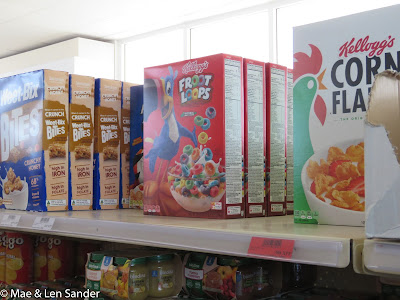 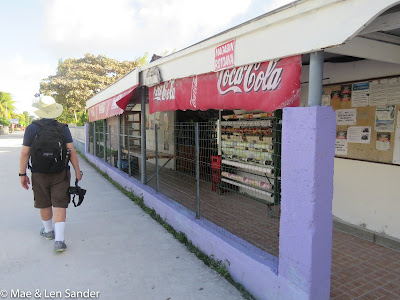 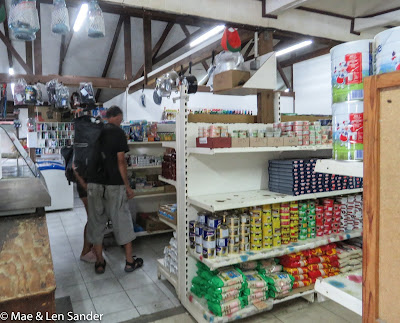 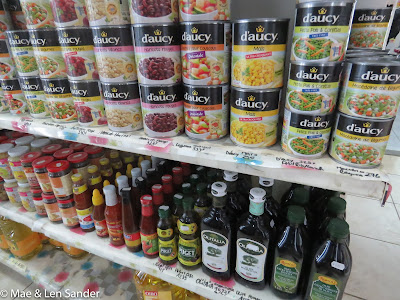 Author of this content is Mae's food blog: Maefood dot blogspot.com.
If you are reading it somewhere else, it's been stolen!
All photos copyright 2019 by Mae & Len Sander.
Posted by Mae Travels at 6:00 AM 7 comments: