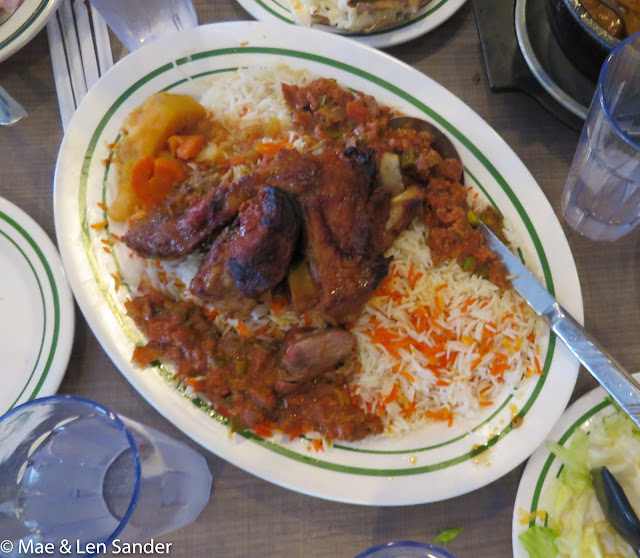 We recently went to Sheeba Restaurant in Dearborn, Michigan, to try some Yemeni food. Their most famous dish is Haneeth, a preparation of roast lamb served over multi-colored rice, with Galabah, that is, root vegetables. It's a large restaurant with two dining rooms. While we were eating lunch, every table was filled most of the time with groups of people who looked as if they represented every ethnic group in Southeastern Michigan! We and our friends found the food quite delicious and interesting.


Dearborn has many Arab and Middle Eastern restaurants, bakeries, and other establishments, catering to its large population of Middle Eastern immigrants and Arab-American residents, as well as to other interested people. According to Wikipedia, Dearborn has the largest Muslim population in the US. This restaurant was strongly recommended by Matthew Jaber Stiffler, who gave a presentation at the Ann Arbor Culinary Historians earlier this year. We enjoyed the talk, titled "Familiar and Exotic: The Long History of Arab Restaurants in the United States," and followed up by trying the restaurant. Stiffler is a researcher at the the Arab American National Museum, which is located quite near the restaurant.


Author of this content is Mae's food blog: Maefood dot blogspot.com.
If you are reading it somewhere else, it's been stolen!
Note copyright on photos.
Posted by Mae Travels at 7:00 AM

I love Middle Eastern food - and you are so lucky to live near so many options!

I don't believe I have ever tried Yemeni food, it looks wonderful.

Interesting -- I know so little about Middle Eastern food. Glad you enjoyed the dishes.

I love trying new foods, and you are lucky to live near such a great sounding restaurant. The cuisine there sounds very well done and authentic.

We have quite a few ethnic restaurants around here but none of them serve Yemeni cuisine. I'd love to try it one day.

That all looks amazing. I love trying different cuisines. ;-)

Big fan of lamb here - what a cool restaurant. I would love to try a place like this one day. Sounds like a fun meal and experience.

I’m glad you enjoyed the experience, and the food.

Have a great week in the kitchen

Mae,
We are great fans of Middle Eastern food. We just returned from Morocco where my husband enjoyed many lamb meals. I of course stuck to the salads and vegetarian cuisine.