What color is your breakfast? 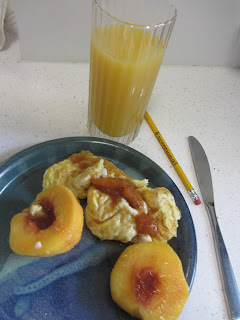 This morning everything I ate was a cheerful shade of yellow-orange: scrambled eggs, peaches (both fresh and in a compote), and orange juice. A bright yellow pencil volunteered to be in the  photo as well. Quite a contrast to the chilly, damp, and gloomy weather that's set in this weekend.

I think I am fully back from Paris in my mind now, and no longer comparing everything I eat to what I ate (or was too full to eat) in Paris. The strong but pleasant taste of French cheese, which really doesn't travel successfully, is now a fading memory and I can eat my usual sliced cheese sandwich without feeling deprived. The sauces I make are sad but I'm getting used to them again.

Yesterday we went to the local art museum on the University of Michigan campus. I doubt if it's as big as 1% of the Louvre, but fortunately it currently has a delightful exhibit of brush paintings by Isamu Noguchi and his Chinese mentor -- "Isamu Noguchi / Qi Baishi / Beijing 1930."

After viewing it, we ate sushi for lunch nearby -- American sushi. I enjoyed it.
Posted by Mae Travels at 11:20 AM 2 comments: 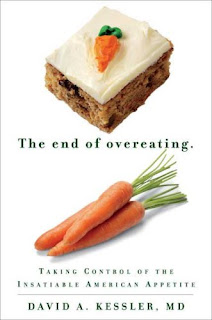 Why do Americans get fat and stay fat? When did they start getting fat? Why weren't they fat before that (whenever it was)? Can legislation make them stop getting fat?

The number of books and articles on the subject of American fatness is vast, and the answers aren't really conclusive. And every day, it seems, there's news of another country approaching or even surpassing American fatness.

The End of Overeating: Taking Control of the Insatiable American Appetite by David Kessler is one of the many to ask what can be done. Kessler examines not just the food Americans eat, but the way it affects them. Specifically, he argues, carefully engineered food products of many types change people's brains to make them crave more and more of their favorites. Beyond describing how food affects people, The End of Overeating offers advice on how to overcome the effects of this manipulation, though I'm doubtful that most people have the willpower to do so.

Crave is the key word here. Creating food that people just can't stop eating is the goal of many industrial food laboratories, and Kessler describes both how they do it and how they express their goals of making people into a kind of food-crazed zombies: not his choice of words, but I think the current obsession with zombies reflects a kind of pervasive fear that we have been seized by forces that we can't control, and this is one of them.

Satisfying food is the alternate to cravable food, according to Kessler. Satisfying food is the old-fashioned kind that could be eaten until one had enough. Satisfying food was plain food that didn't have a lot of added salt, sugar, and fat but also included complex traditionally cooked dishes. I think the American paradox, as suggested in Kessler's book and others, is that satisfying food has been crowded out by cravable food. Many people who have been conditioned by cravable food have simply lost the ability to recognize when they aren't hungry any more. The products of the food industry, Kessler demonstrates, make many consumers helpless. Though they often see themselves as victims, they keep eating and overeating, unable to stop.

Kessler uses a number of examples of such individuals who say they just can't stop thinking of some favorite donut, cookie, sandwich, pizza, or other cravable delicacy -- people who engage in what he calls conditioned hypereating. The foods they mention share certain not-very-natural characteristics, Kessler demonstrates in a number of chapters. There's some overlap here with Salt Sugar Fat: How the Food Giants Hooked Us by Michael Moss (as I wrote in Who's Rational?) but Kessler emphasizes how people experience the food in real life, while Moss concentrates more on the labs.

It's not just the content, which includes meticulously researched combinations of fat, sugar, and salt. To create a product that people can't stop eating, food labs also engineer the way that the food behaves when it's chewed. A potato chip may begin with a rush of salt and crunchiness, but it quickly melts away in your mouth: cravable food doesn't have too much fiber. A slice of pizza is layered with several flavors that pop and excite your mouth, but can be chewed and swallowed easily, allowing you to take another bite, another bite, another bite. Cravable meat dishes use tenderized or ground meat that requires minimal chewing compared to a real steak. A Cinnabon roll has a super appealing aroma and sweet spiciness, along with a creamy frosting that provides just the right mouth feel along with the flavor.

Kessler talked to the food engineers whose research has provided Americans (and those to whom we export) with the perfect cravable foods, and he talked to their victims who couldn't stop. He provided statistics about how very young children studied in the past seemed able to keep eating until they had had enough to grow normally, and even how their food choices were balanced to match their needs. Recent research, he pointed out, suggests that this is changing: the engineered foods (like MacDonalds) hijack this innate ability, so children lose the capacity to know when to stop eating.

Kessler mentions the French Paradox: why French people don't seem to get fat in the same statistical sense that Americans do -- or at least why that hasn't happened yet. As I read the book, though, just after my recent trip to Paris, I was struck by Kessler's category of satisfying foods: those that one eats with great pleasure, but that don't trigger the hypereating that he discusses. Satisfying food -- highly satisfying food -- is what's on the menu in the traditional homes, restaurants, bistros, cafes, and brasseries where I ate in France. Is that what most young French people are eating now? Maybe not. Maybe the French paradox will dissolve as their food industry catches up with ours and discovers how to make much more money with fat, sugar, salt, and engineered textures.

Macarons in the News 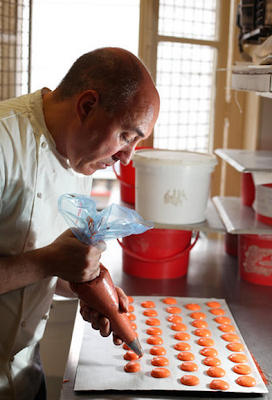 Today: a wonderful slide show from the New York Times on French macarons, including history and a tiny bit about technique -- see sample photo above. The complete article is here. There's even a recipe, though not for the amazing filled macarons at Laduree.
Posted by Mae Travels at 7:27 AM 2 comments:

A Dinner in Paris

Capturing the taste of Paris?

How I made the duck:

Dessert in France is often a simple but perfect choice of fruit and cheese, which many people purchase at the stunning outdoor markets that happen in most Paris neighborhoods around twice a week. 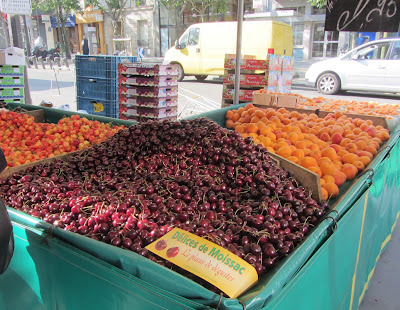 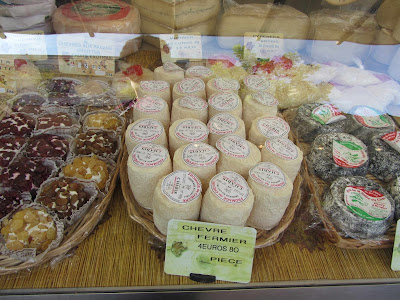 Our friend Michelle varied this with fruit and ice cream: 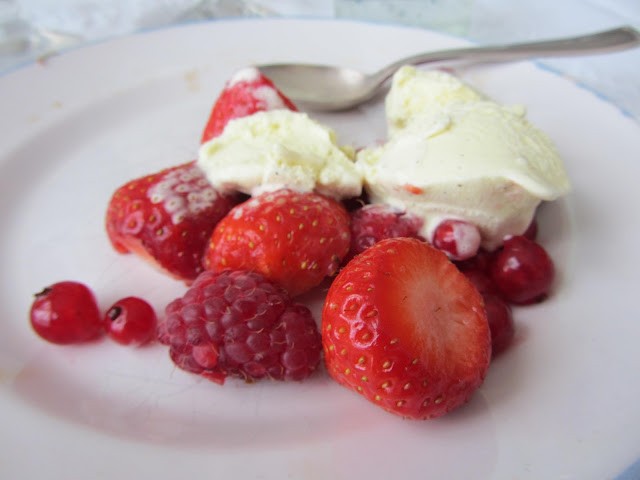 Restaurants also offer cheese and fruit, but also a selection of many other desserts such as this creme brulee that I had at Les Bugnes, a Basque restaurant that our friends took us to: 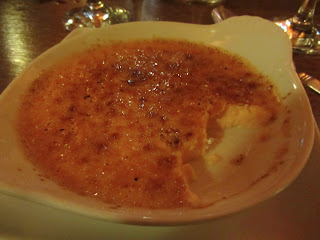 A fruit tarte at another restaurant, Le Baratin, in the Belleville quarter where other friends live: 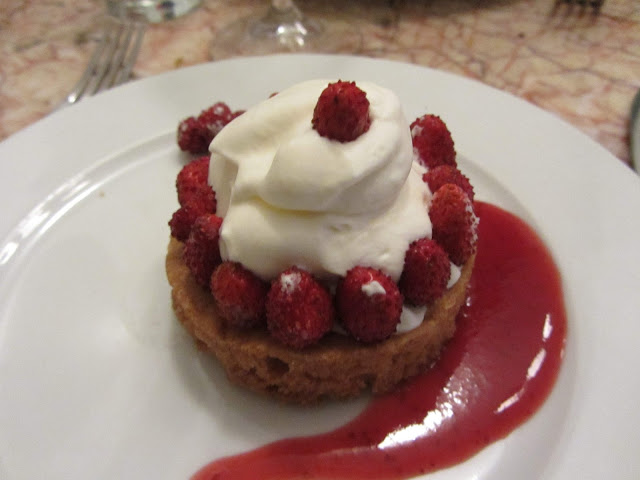 All week I tried to get a tarte au citron -- I finally managed on Friday: 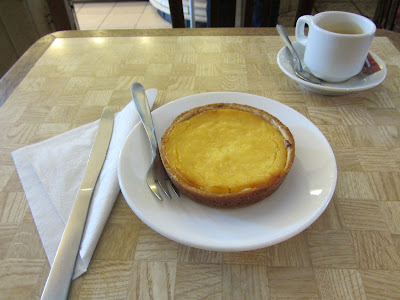 Very elegant patisserie in the airport: 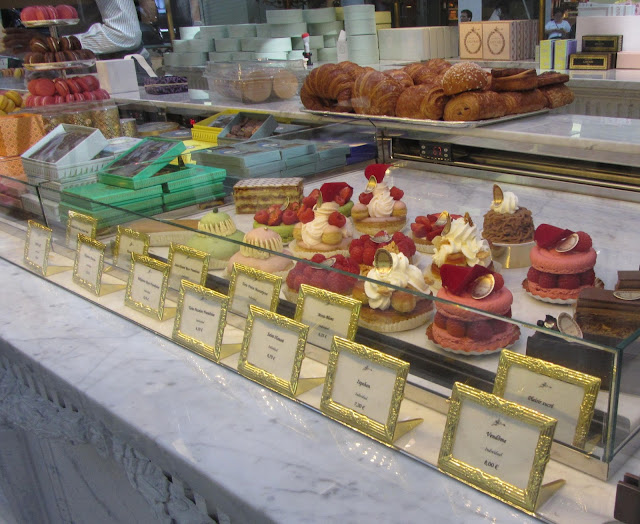 Paris: A cup of coffee is a wonderful thing


Breakfast at the airport yesterday: one choice of coffee -- Starbucks. No photo, as it's exactly like a Starbucks in the US, including glazed donuts, bagels, muffins and characteristic names for drink sizes. Who would want to see a photo of that?
Posted by Mae Travels at 6:30 AM 1 comment:

We left our hotel at 7 AM, had a comfortable taxi ride, boarded our plane on time, and we are now back home for a while.
I'll be posting more about Paris.
Posted by Mae Travels at 6:18 PM No comments: 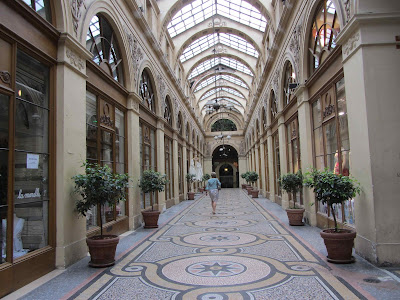 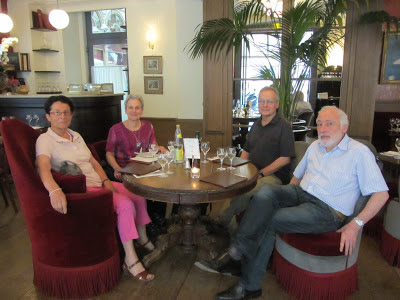 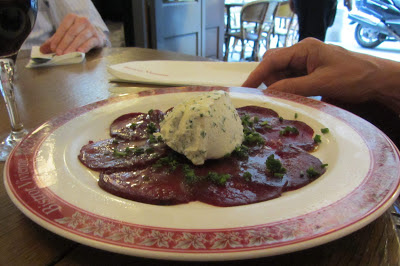 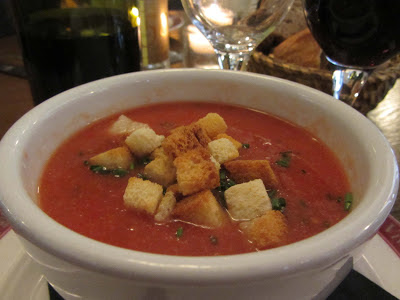 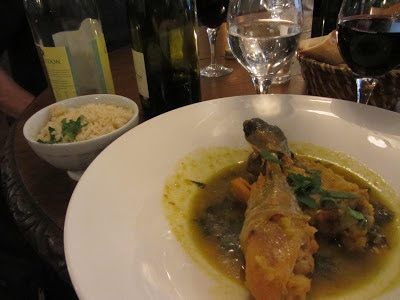 Last night we had dinner at Bistrot Vivienne in the Passage Vivienne with our friends Françoise and Laurent. It's one of the remaining 19th century shopping centers (or at least the predecessors of shopping centers) in Paris. It's a beautifully decorated restaurant with a delicious menu. You can see photos of the velvet couch where we sat, and the appetizers -- gazpacho and beets with goat cheese. The chicken was cooked with preserved lemon and served with cous-cous. Other dishes included asparagus ravioli, and the wonderful melon that's available at the markets and shops. Dessert: ice cream, mousse au chocolate. Needless to say there were many other choices on the menu. 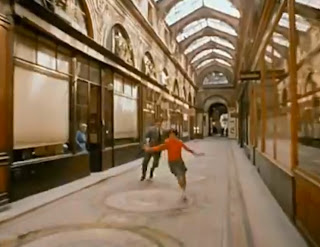 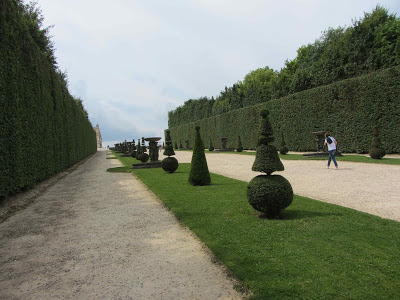