My Kitchen in November 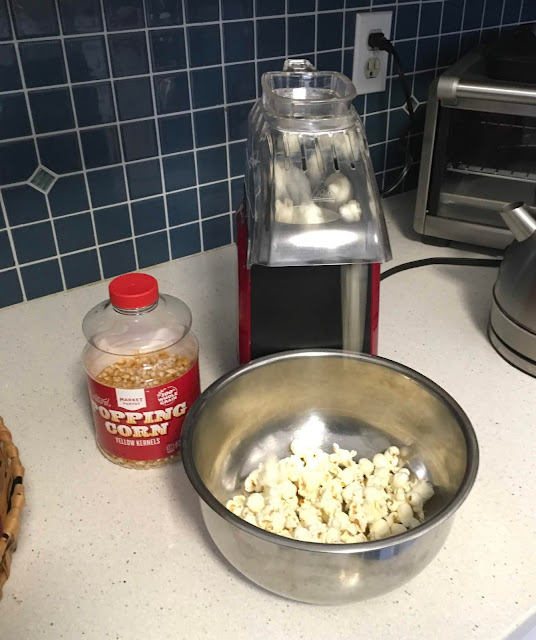 Here's my kitchen wrap-up for a month when I was mostly preparing to go to Paris or winding down from the trip. You might think I would go to the famous Paris culinary shops, cookbook stores, or food stores and bring stuff back, but this was a no-stuff trip except for two magnets. (Yes, the customs agent gave me a funny look when he asked what I had brought back and I said "two magnets.")

Most of November when at home, I was cooking only basics. I'm working on getting some new spices, so maybe I'll have more to say next month!

For more kitchens and kitchen news from many other bloggers, see the blog event "In My Kitchen" at Sherry's blog: http://sherryspickings.blogspot.com/. I suspect that most of the other bloggers will have much more new stuff than I do!

"Flóvent and Thorson took a table at a restaurant on Hafnarstræti called Hot and Cold. The place had opened after the outbreak of war and was popular with servicemen. It sold fish and chips alongside traditional Icelandic dishes such as breaded lamb chops, rhubarb pudding, and skyr with cream, which proved a hit with the soldiers. The worst of the crush was over by the time the two men arrived and the owner, a short, curly-haired man in shoes with noticeably built-up heels, was busy clearing the tables. As they tucked into their salt cod with boiled potatoes and dripping they fell to discussing Frank Ruddy." (The Shadow District, p. 89) 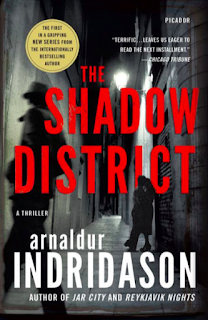 Icelandic author Arnaldur Indridason has written several police procedurals featuring the two detectives named Flóvent and Thorson. I can't recall how I heard of this series, but I read the first of them, The Shadow District, on the plane on the way back from Paris. It was just right for a 7-hour trip!

The novel takes place in modern-day Iceland where a retired police detective, trying to solve the murder of a 90-year-old man, is forced to return to an unsolved murder from the time of World War II, when large numbers of British and American soldiers were stationed in Iceland for various military purposes. The social history of the interactions between the foreign soldiers and the local Icelandic residents is portrayed in a most interesting way!  I hope this cultural background is well-researched as I really have no way to judge.

The suspense in both past and present works very well and the characters are likable and convincing. As always, I appreciated the descriptions of food from the days when Iceland was little influenced by outsiders. Reading this book on an airplane made me recall my first ever plane trip many years ago, when I traveled from my home in St. Louis to France. At the time, you could get very cheap flights on Icelandic Air, which flew all its planes through Reykjavik. It was not a bad flight, but the Reykjavik terminal was under construction so the airline took us on a bus to a location away from the airport, and gave us a meal which I think included baked cod and unfamiliar vegetables. I found this meal strange, and couldn't eat it. The stewardess seemed to disapprove of my waste of food. When I arrived in France, however, the food didn't seem at all strange -- I thought it was wonderful!

In The Shadow District, there's also occasional detail about food of the present day and what people might have eaten. For example, the detective wants to know about the murdered man:


"The last meal the man had cooked himself was porridge. That was easy – he hadn’t washed up the pan. And he had eaten liver sausage with the porridge. The other half of the sausage was in the fridge, and the bowl in the sink contained traces of this meal. Judging by the contents of the fridge, he had subsisted largely on traditional Icelandic fare. The bread bin contained flatbread and a loaf of rye that was going mouldy. There wasn’t much in the kitchen cupboards, just a few plates and cups." (p. 38).

Similar fare shows up in the story from the 1940s -- about a man taken prisoner as a suspect in the earlier murder case: "He had little appetite and hardly touched his breakfast of porridge served with two slices of liver sausage and a glass of milk." (p. 228).

It's likely that I'll read more of the books by author Arnaldur Indridason, as I enjoyed the way he depicts a fairly standard mystery tale in a rather exotic setting.
Posted by Mae Travels at 7:00 AM 5 comments:

Inspired by a week of dining out in Paris, and a bit down from the first day back when we were eating stuff from the pantry and freezer -- we decided to try a new French recipe today for lunch. It's called Brouillade of Mushrooms. We associate the dish with author Martin Walker's fictitious detective and amateur chef Bruno, whose native Perigord offers him delicious specialties. Bruno, we think, makes this dish with truffles, not mushrooms, but we have no truffles at the moment (or ever, if you really want to know). We didn't actually eat anything like it in Paris, but just chose it as a nice French recipe.

Actually, brouillade is the French name for scrambled eggs, though some recipes have you cook the egg mixture very slowly to make it more like a custard. A nice new word for Wordy Wednesday! It's actually a very simple recipe, and doesn't require anything unusual: I had all the ingredients on hand except cream, so I used milk instead. Here's the recipe source that I used: "Brouillade of Mushrooms or the best scrambled eggs you'll ever eat."

All photos and text copyright 2018 by Mae E. Sander. Published at maefood dot blogspot dot com. If you read this elsewhere, it has been stolen.
Posted by Mae Travels at 6:27 AM 11 comments: 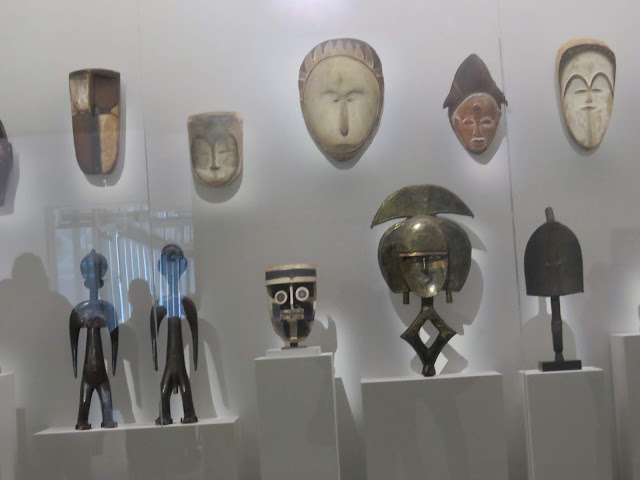 At the beginning of the exhibit "Cubism" currently at the Centre Pompidou is a display of primitive art objects that once belonged to the artists. Documentation throughout the exhibit pointed out how these objects influenced Picasso and his fellow cubists to see new ways to depict faces and other objects. Various displays of African art, mainly from the French colonial possessions of the early 20th century, awakened the interest of Picasso and others in his circle of artists.

Two temporary art exhibits and one permanent collection that we visited in Paris last week featured the work of Picasso and his contemporaries, and also included some of the primitive art:

Throughout the past week's visit, and on many past trips to Paris, I have been interested in the way that my fellow museum-goers reacted to the art and to the environment of museums. In the last few years, the popularity of selfies has affected many art spaces, to the extent that at times half the people in a crowd seem to have their backs to the famous paintings or sculptures. Also, people following a guide often seem to me to be paying less attention to the actual works of art than people alone. 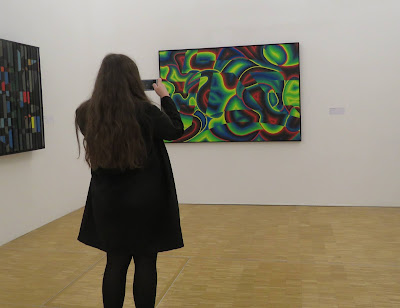 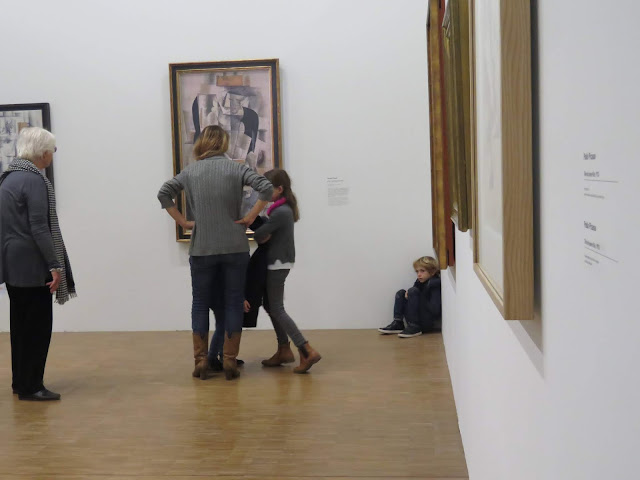 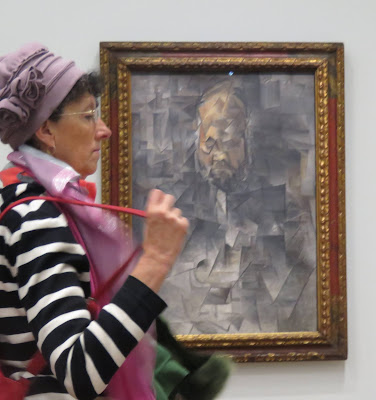 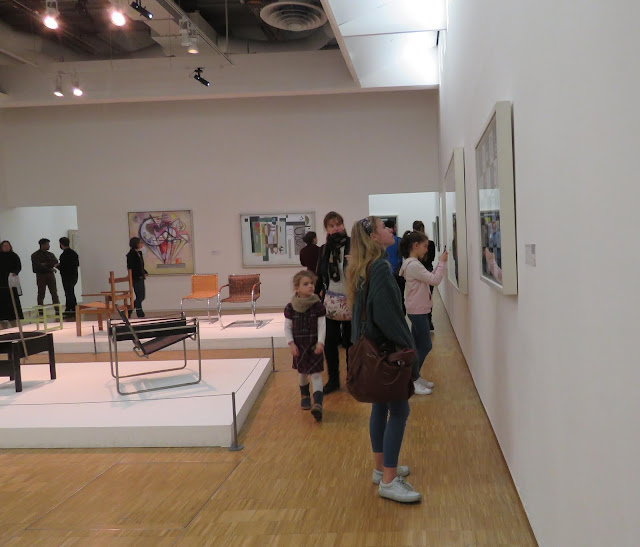 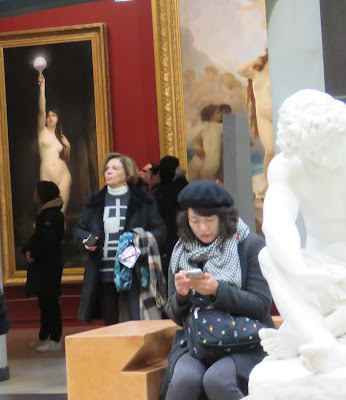 The Orangerie: Home of the giant Monet Water Lillies 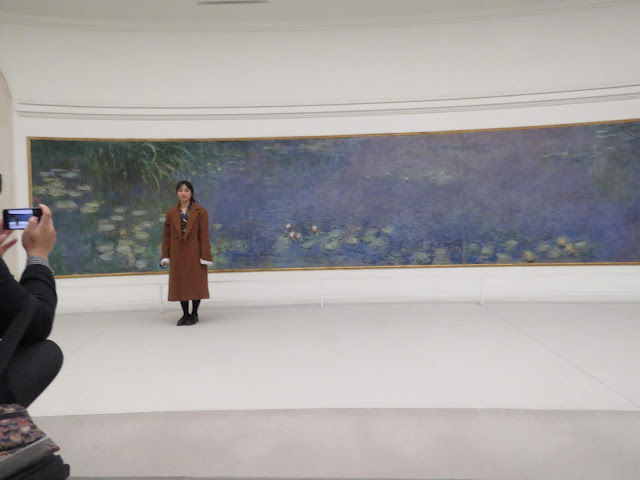 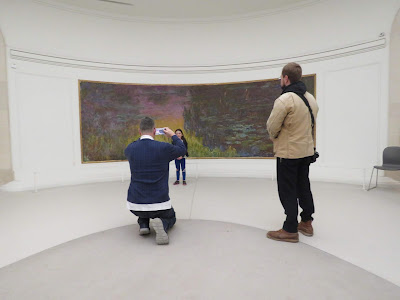 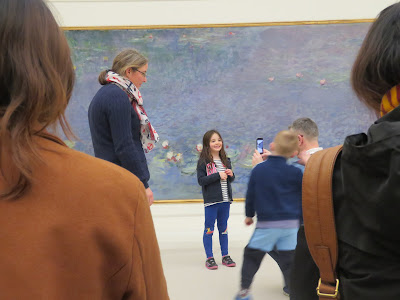 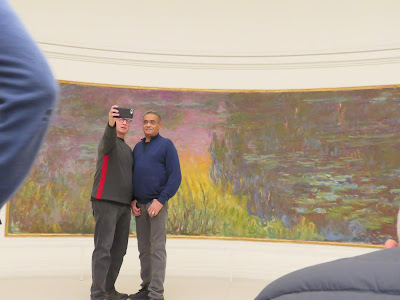 The Louvre: Biggest selfie opportunity of all!

We're Not in Paris Any More

We have had a wonderful visit to Paris. If all goes as planned (and there are no demonstrators between the hotel and the airport) we'll be home tomorrow night. I'll have a number of additional blog posts about the art and sightseeing we have done this week!

* Correction to originally stated number of demonstrators. On Saturday 8,000 demonstrated in Paris altogether. In all France, according to Le Monde, 106,000 people participated in the actions. A week earlier the numbers were much larger.
Posted by Mae Travels at 12:37 PM 4 comments:

A Few Good Things to Eat In Paris 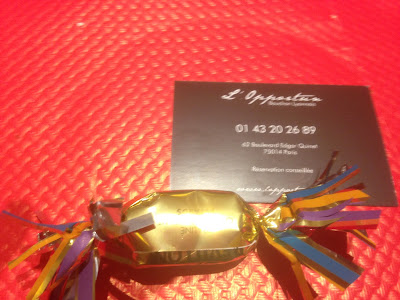