I haven't tried any of the recipes. However, I find them fascinating to read. Many of them require very specialized ingredients, like plants that grow wild in Indian country or special types of chiles, corn,  or beans that are cultivated there. Game such as venison and rabbit is also on the menu. Substitutions would make the recipes pretty ordinary. So I might just opt to enjoy the photos.

As we drove west, we didn't search for traces of old Route 66, but it seemed as if old Route 66 came after us! I realize now that on one trip or another in the last few years, we've followed just about every segment of the old "Mother Road." More distantly, on family trips west in my childhood, I often traveled the original Route 66. So I couldn't resist ordering The Route 66 Cookbook by Marian Clark when Ruby showed me her copy. (Lots of copies for sale on amazon!) 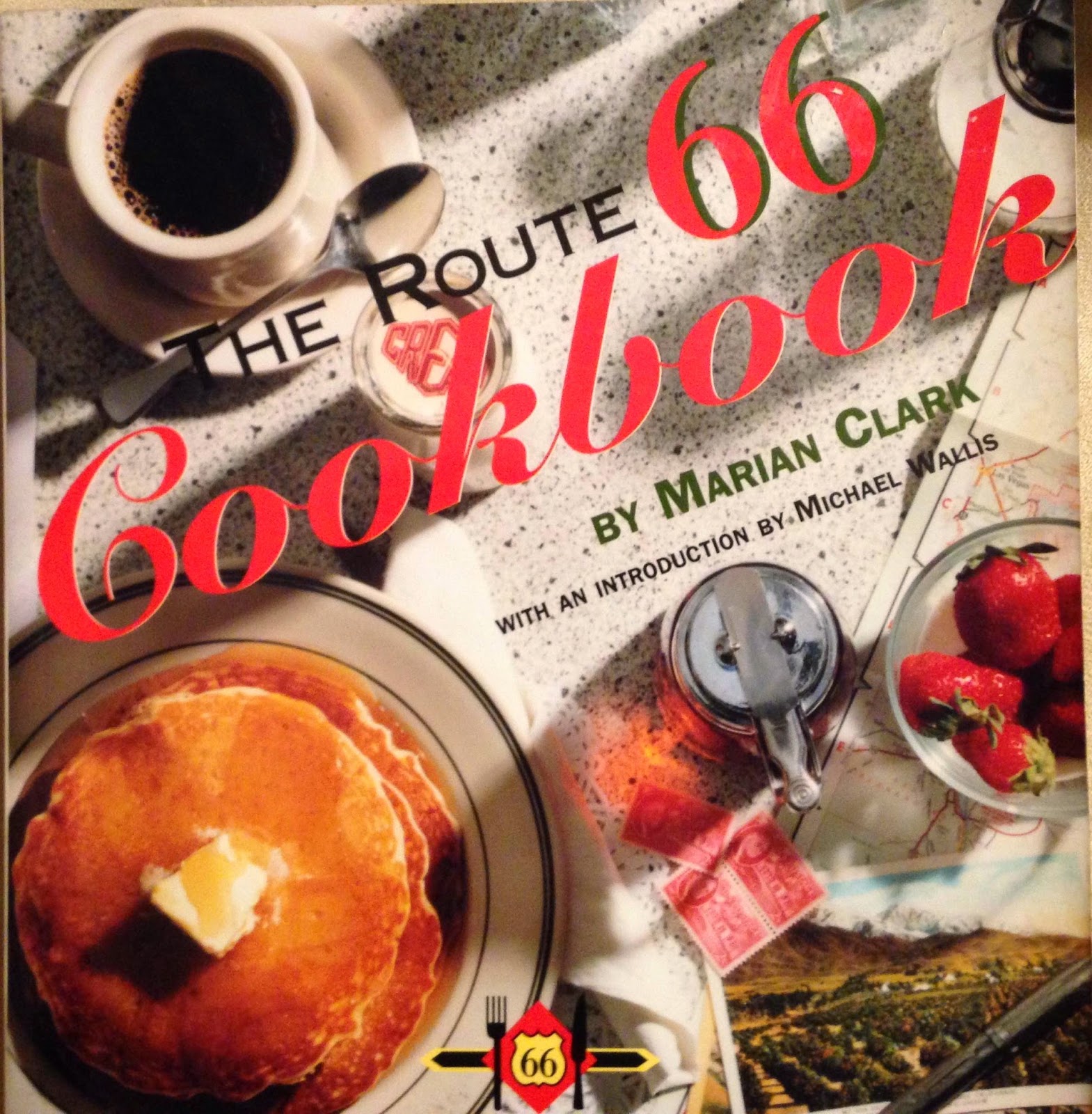 This cookbook dates from the early 1990s. It gives quite a bit of the history of Route 66 from 1929 until the sixties. It also documents sights to see and businesses, especially diners and restaurants, that were still in business then; that is, around 25 years ago. Quite a few were in their sunset years and thus no longer exist in any form. The current Route 66 has quite a lot of reconstructed nostalgia, while evidently more of the old establishments and buildings still endured in a more original form 25 years ago. The book is thus a testimony to Route 66 in several different eras, all quite different from NOW.

The headings on the recipes in the book don't actually identify when they were collected or exactly how the author obtained them. Sometimes the original recipe that served a whole day's diner customers is given -- such as a recipe that calls for 11 pie shells to be filled with a rather large vat of filling, or a bread recipe that calls for over a pound of yeast. There are many recipes for chile, spaghetti, pies, and other diner foods. Sometimes the recipes are obviously trimmed down to serve a small number or even a single person.

The recipes are definitely very retro, looking to me a lot like women's magazine recipes from the 1950s. They use a lot of processed ingredients such as garlic powder, canned soup, canned pineapple, and catsup. The favorites of that era are not really favorites any more, I think. I am not sure I want to make any!

As I said, it seemed as if Route 66 was coming to us, as in the following examples, most of them mentioned in the book:

The special exhibit titled "Beyond Bosch: The Afterlife of a Renaissance Master in Print" at the St. Louis Art Museum is currently showing a fascinating collection of prints "inspired by Bosch's unique legacy of artistic invention." I've always loved the work of Bosch, so I very much enjoyed seeing this exhibit.

Several of these reinterpretations of the bizarre imagery from the works of Bosch depicted rather crazy scenes of eating:

From the exhibit description:

"Printmaking flourished in Bosch's lifetime, but only a small handful of engravings by his contemporary Alart du Hameel have any potential connection with Bosch himself. The Boschian print phenomenon truly exploded after the artist's death in the mid-16th century under the aegis of the pioneering Antwerp print publisher Hieronymus Cock, and maintained force into the 17th century. These later prints are not literal reproductions of known works by the artist. Rather, they are images inspired by Bosch's unique legacy of artistic invention."

On our way home from Arizona, we have stopped for a brief visit with our relatives in suburban St. Louis. Last night, we had dinner at Giovanni's Kitchen. I had a delicious spinach salad with cheese, crisp bacon-y guanciale, and grapes. My second course was mezzemaniche alla puttanesca, described on the menu thus: "Large rigatoni pasta, San Marzano tomato sauce, olives, garlic and capers and red pepper tossed with Parmigiano Reggiano." I'm going to have to get the classic recipe for pasta puttanesca and try it at home!
We are enjoying our stay with Ruby and Jay, including Carol who's also here for a few days. More to come about our trip to the St. Louis Art Museum!
Posted by Mae Travels at 5:48 PM 2 comments: 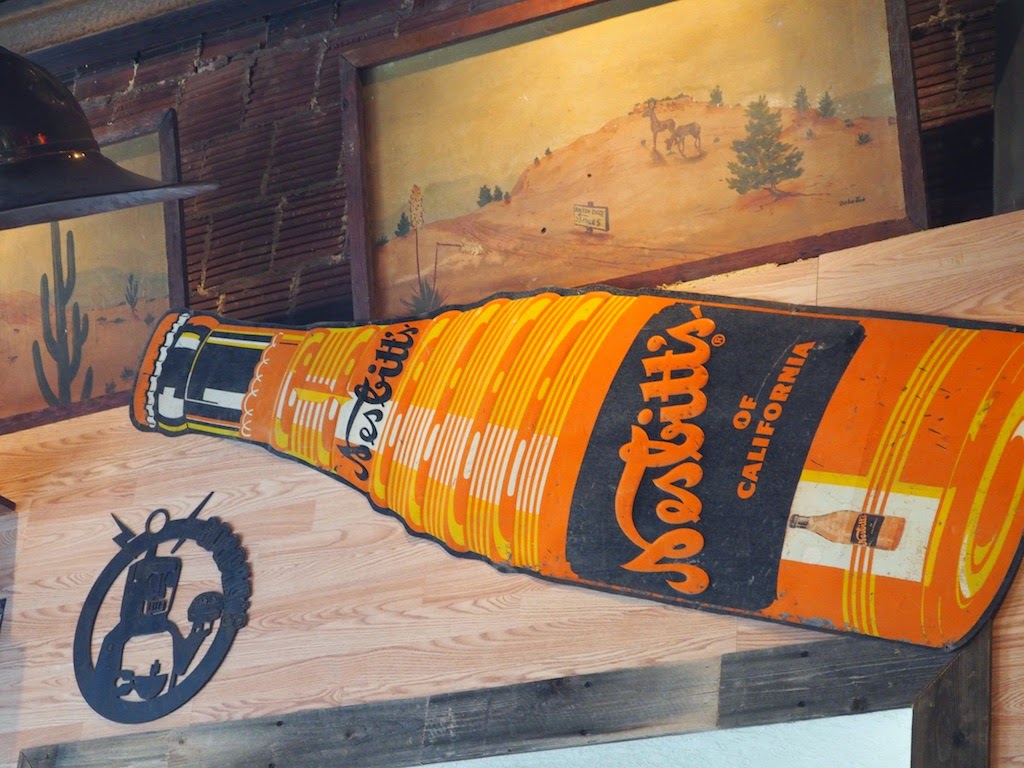 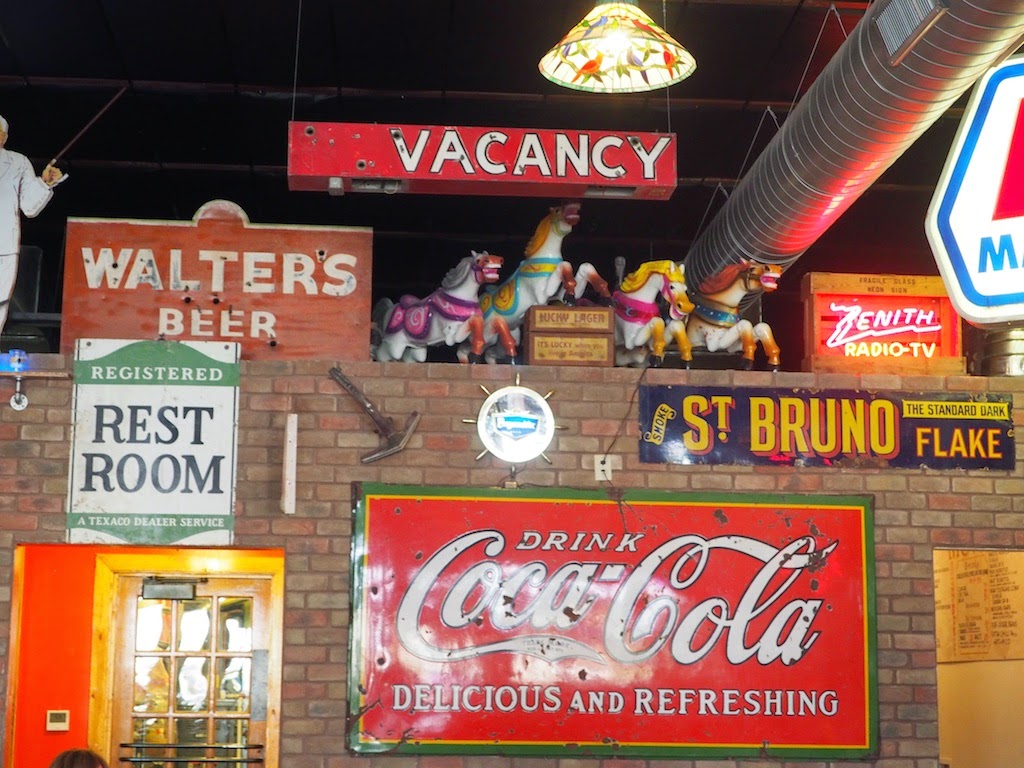 Where we drank our coffee this morning... 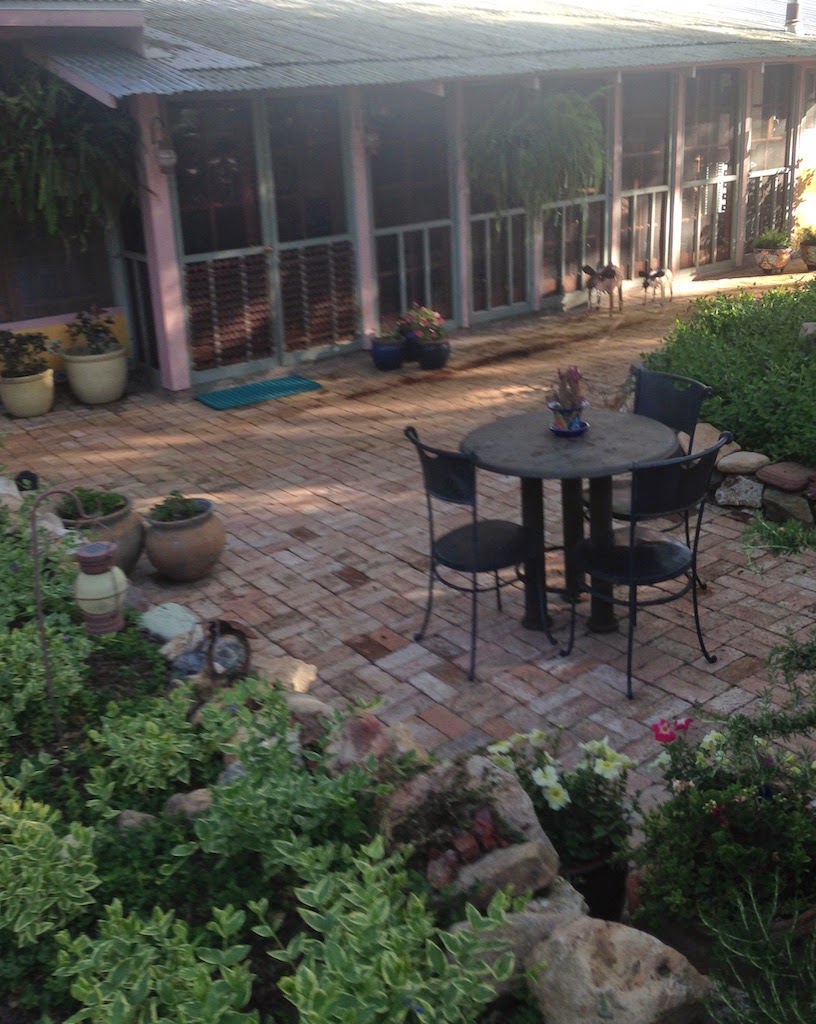 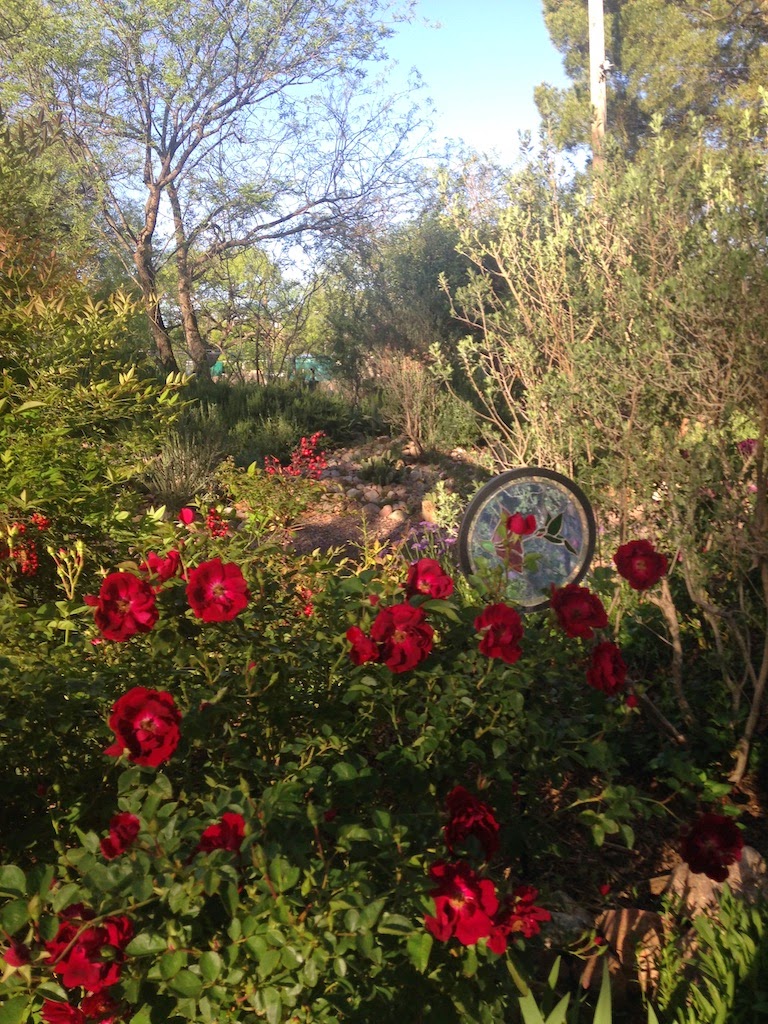 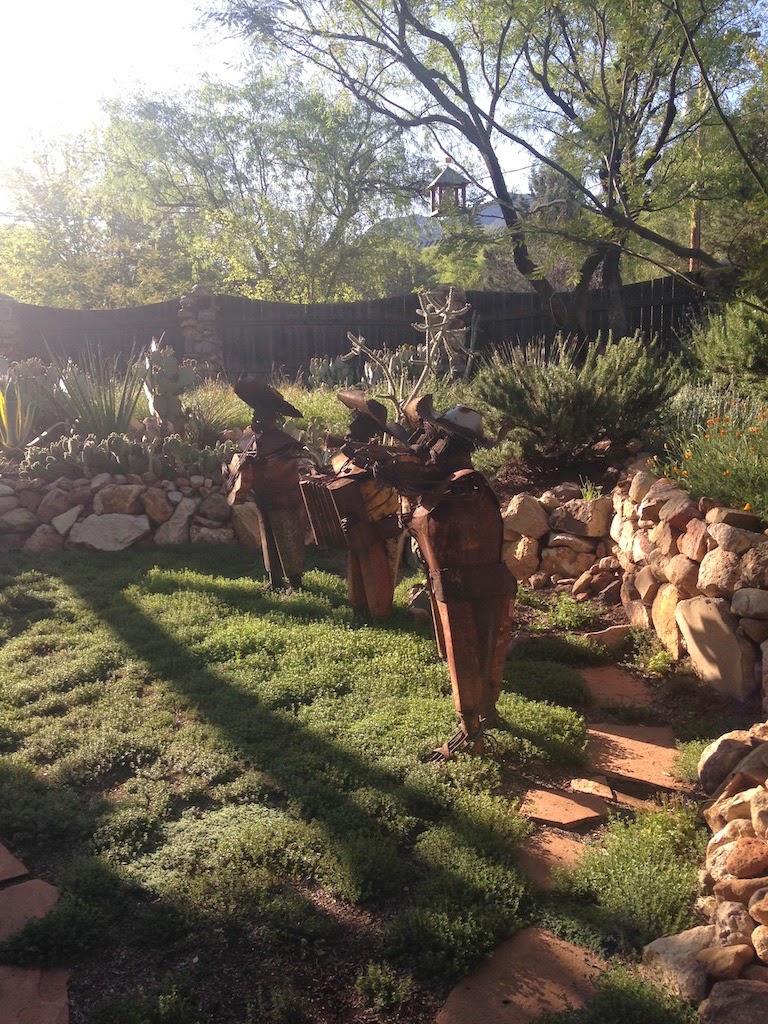 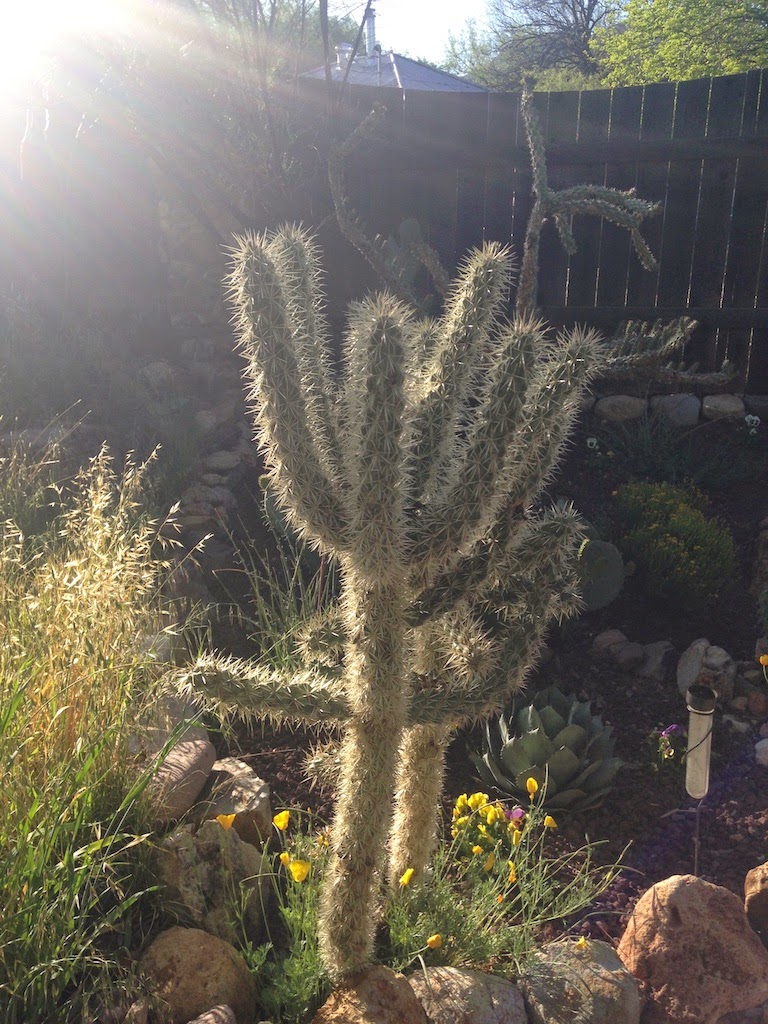 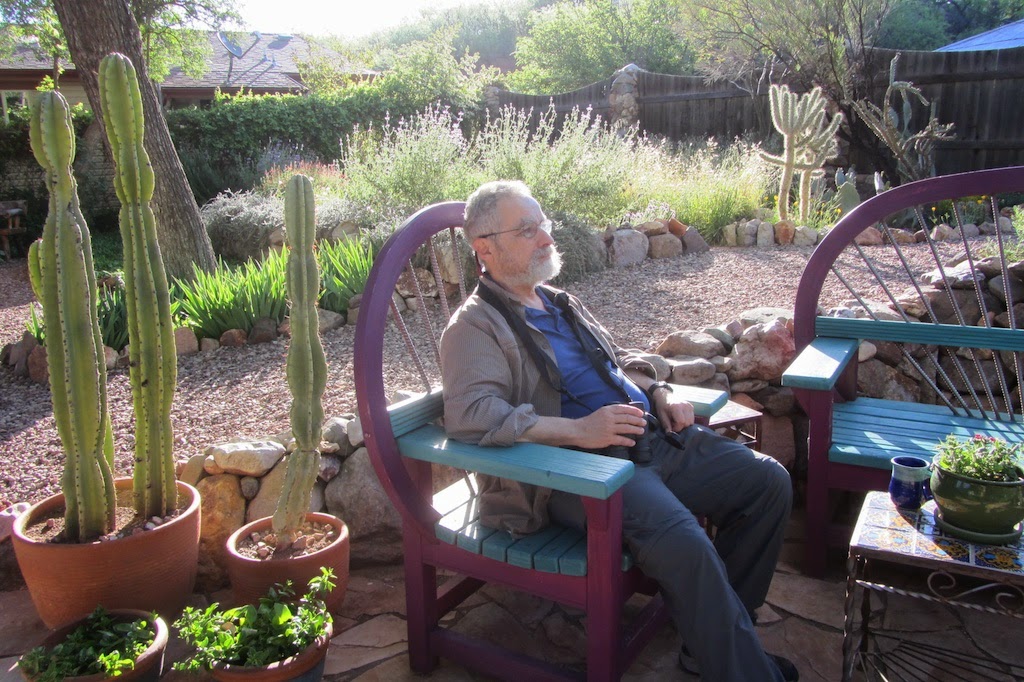 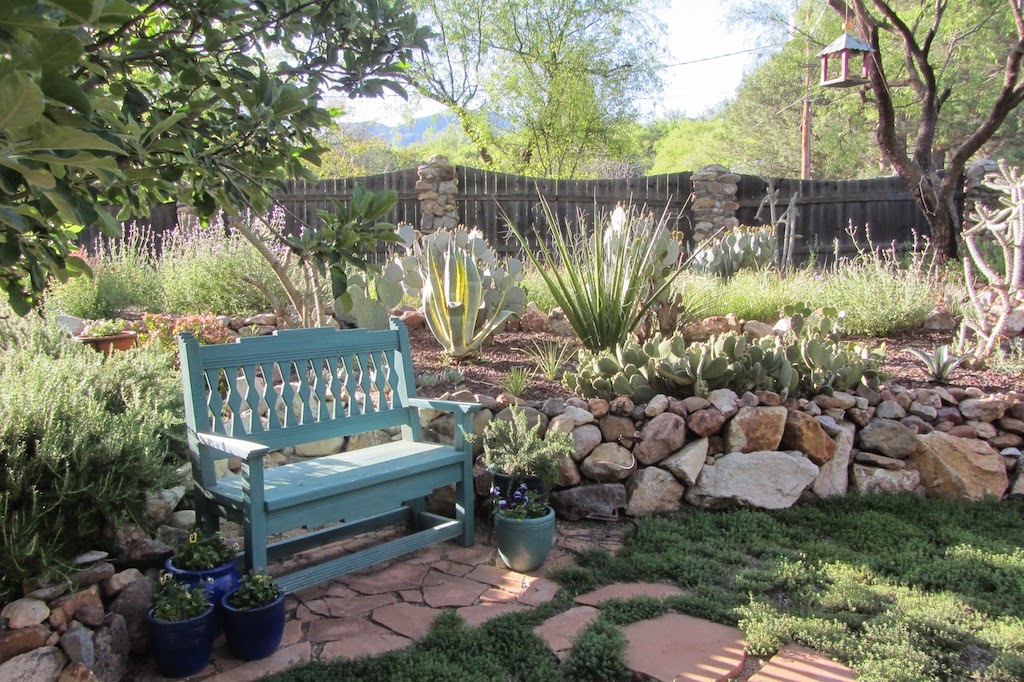 After breakfast we continued with our outdoor adventures, bird watching around Patagonia. At our first stop, a mountain ranching area where cows were grazing, we searched for Montezuma quails -- we heard them, but never saw them. We also explored a grassland area, a pond in the middle of a golf course, and a nature preserve. To see the bird photos, check Len's Flickr page HERE.

We're having fun watching birds and looking around the incredibly beautiful scenic back roads in southeastern Arizona, but we don't have time to look for any special type of food. A restaurant near out motel is more attractive than one that we'd have to drive far to get to, and we've been eating quite a few picnic lunches with food from a supermarket. This isn't really an adventurous gourmet way to do things.

Last night we ate at the Mexican restaurant next door to our motel -- the food was passable, the waiting time was really annoying. The same thing happened the previous night... not-too-bad classic Italian food, terrible wait, annoying attitude of management. Frankly, we don't know how to learn from this: we did look at online reviews! Just bad luck, we guess.

Dinner for the Birds


We are now in Sierra Vista, Arizona, which is not far north of the Mexican border. It's a very rich environment for birds that like higher altitudes but not the completely arid deserts. Besides northern species, birds from Mexico migrate into several canyons nearby. As a result, the area is very attractive to bird watching.

We visited two sites in these canyons this afternoon.
Posted by Mae Travels at 12:07 AM 1 comment:

We're still traveling around the Southwest. The food is enjoyable but not very interesting, so I haven't been writing about it. We had extremely classic Italian food for dinner (I mean meatballs and pasta), and last night we opted for sandwiches from a nearby Whole Foods, which we ate at the convenient picnic tables at our motel.

I thought I would put in just a few of my pictures from today's visit to the Arizona-Sonora Desert Museum, which is a combined natural history museum and zoo, entirely devoted to local species of birds, animals, reptiles, plants, and whatever else there is. We saw, among others: a coati, wild pigs called javelinas, a tortoise, and a collection of local hummingbirds in a hummingbird house. The museum has recreated small outdoor areas representing the ecosystems of the desert, mountains, stream beds, and so on. The large outdoor museum/zoo attracts many wild visitors, as well as the captives.

Ok -- the shrimp tacos at St.Clair Bistro and Winery, selected because it's next to our motel:

My main dish at St.Clair Bistro last night wasn't a good choice: the mahi-mahi was overcooked and tough; moreover, the sweet salsa flavors fought with the green beans and mashed potatoes. But the tacos were pretty.

For our non-eating activities like nature walks and museums: go to  these posts on my travel blog.

We ate lunch at McDonald's in Shamrock, Texas, today. The road past McD's and the Conoco station next to the freeway, Interstate 44, is the old Route 66, and from the McD parking lot you can see the old tower of a historic Conoco station and just the top of a sign for a cafe, also in the sort of Art Deco design that's considered iconic Route 66 style.

Well, I'm glad we have a modern road that could take us from Tulsa to Albuquerque in one day. I bet it was at least two very long dusty and tiring days when the two-lane 66 was the only choice. Not that our day wasn't tiring, but we covered a lot of ground when that was what we wanted to do. Now we have time to explore some birdwatching sites and other natural areas around Albuquerque, look at some historical places, and so on. We had a choice!

Also, I admit that I'm glad to know, when I go to McDonalds, that I'll get the same hamburger and Diet Coke I had the last time I ate there. I know there's a lot of nostalgia for the good old cafes and their supposedly wonderful cooking, but I suspect that more often than not, it wasn't really very good. Not to mention whether it was really clean, whether the food was really fresh.... That's what I remember from childhood trips, anyway. A mom and pop diner could be good, but wasn't usually better than today's McDonald's!

We also stopped at the Midpoint Cafe in Adrian, Texas, that's on the list of historic Route 66 locales. Lots of tourists stop there if they are making a Route 66 pilgrimage, not usually when simply trying to get from one point to another (like Tulsa to Albuquerque, which we were trying to do). We only had a coke and a nice conversation with the owner, but the pies looked very delicious. The owner mentioned that fast freeway travel destroyed America's small towns. I wonder. Maybe it was creative destruction!

For more of today's trip see "America the Beautiful" at my travel blog.
Posted by Mae Travels at 11:14 PM 3 comments:

Last night we enjoyed a Seder, the traditional Passover meal, with my sister Elaine and brother-in-law Larry. I didn't take photos of every possible group of people or every course, but above are a few of typical parts of the ceremony and the food. Especially, I missed a photo of their friend David (he was sitting next to me).

On Passover, I love the preparation and the enjoyment of being with friends and family, but I think about our grandmothers and great-grandmothers and all the work they did to prepare for the festival, especially during the early years when Jews were new immigrants to the US. Though I love the modern celebration, like last night's, I can't forget the way things were in the past and the problems the Jews of the world still face. For a longer description of my thoughts, see this post: Passover: Hardships of the Past.
Posted by Mae Travels at 7:40 AM 2 comments: