Arsenic and Strychnine at the Reform Club 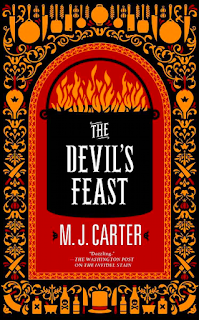 "Alexis Soyer (1810–1858) deserves to be far better known than he is. ... He was the first real celebrity chef, a brilliant, inventive cook and a shameless self-publicist. In style, one might describe him as part Heston Blumenthal, part Jamie Oliver." So writes M.J. Carter (Miranda Carter, born 1965) in the "Historical Afterward" to her mystery novel The Devil's Feast, published earlier this year. Soyer, a chef from Paris, is best known for creating the kitchen and the brilliant meals and banquets at the Reform Club in London.

While most historians might create a straightforward biography of such an underrated figure, Carter did something more creative. Although no crimes are recorded in the history of the real Reform Club, Carter's version of Soyer is plagued by a mysterious poisoner. Under the pressure of an upcoming banquet of great importance, the mystery is investigated by two Victorian detectives: the narrator, a Captain Avery, and his shadowy and less-socially-acceptable colleague, a man by the name of Blake. These characters also featured in Carter's two earlier mysteries, which I haven't read.

In The Devil's Feast events proceed very quickly. The two detectives must establish a motive for the poisonings, as well as try to find the culprit in the complex social atmosphere of the Reform Club, which was a political club of great importance in Parliamentary politics in 1840s London. Besides detecting, the two have to protect themselves from various plots against their own lives and freedom. Thus there's quite a bit about politics in the novel, as well as brief portrayals of some of the still-famous real-life members of the club and their political machinations.

Above all, Carter's detectives must learn all they can about Soyer's kitchens and menus at the Reform Club -- Who prepared each dish that the victims ate? What is the hierarchy in the kitchen? What equipment and utensils were used? What was the food like? Which tradesmen supplied the raw materials? Were bills paid on time? Carter's details were very fascinating -- we learn lots about the food and how it was prepared. My reaction is that the combination of accurate descriptions with a need to know how they work because of the mystery makes this a really exciting book to read.

Here are some of my favorite food quotes from the extremely numerous passages in the novel, beginning with the first meal Soyer serves to Avery, the narrator:


"A waiter served each of us with a morsel of lobster in a buttery sauce flavored very gently with Indian spices laid inside a small, crisp, layered pastry case or vol-au-vent. ... a soup of early asparagus, light yet intensely flavorful, then turbot in a delicate pink sauce of lobster roe, then a whole salmon trout, remarkably suspended in aspic as if at the moment just before it took the hook....

"After this there was a warm terrine of quail and chicken; peas stewed with lettuces; small, buttery omelets flavored with herbs; and a delicious dish of tripe between unctuous layers of leeks, onions and carrots, which I would have thought would be far too rustic for the Reform’s table. From Soyer’s special cupboard, bottle after exquisite bottle emerged." (p. 39-41)


"The fare was simpler than Soyer’s dinner, but no less satisfying for that. A velvety vegetable soup, followed by three small plates of French olives, anchovy filets and crisp, bitter radishes with butter. Jerrold and Mayhew ordered roast beef served with early spring vegetables, some small potatoes basted in butter and chopped herbs, and I chose Soyer’s famous dish, lamb cutlets à la Reform, as well as a late winter salad of herbs and cress. Percy, who periodically patrolled the Coffee Room, came to carve their beef, a great roast of which rolled up on a silver platter, his knife sliding through the meat like a diver penetrating water." (p. 162).

Soyer's provides to Avery information on some of the kitchen workings, including his own inventions:


"The staff are divided into sections. One, for example, prepares sauces, another roasts, another sees to the grilling and frying of meats, another prepares fish, another the soups and vegetables; another, known as the garde manger, prepares cold savories, such as aspics, terrines, hams and salads; and, finally, we have the pâtissier for sweets, desserts, ices and special cakes, as well as our own baker. Heat, light and ice are produced with the help of our six-horse-power steam engine, which sits in a purpose-built room well below the kitchens. We have gas pipes throughout the kitchen and the club. I can tell you that the club spent the sum of six hundred and seventy-four pounds on pots, pans, knives and utensils." (pp. 62-63).

But Soyer's also a realist about the staff:


"Bah! Any kitchen is thus. Every apprentice wishes to be a commis, every commis to be a cuisinier, every cuisinier to be a chef de partie. That is what galvanizes the kitchen, making each strive to do better. Those with real talent rise over the heads of the others. It is conflict, it is life."(p. 195).

I particularly enjoyed a description of Soyer preparing an omelette aux fines herbs -- here's an excerpt:


"It occurred to me that I had never seen Soyer cook. He took a long phosphorous match and placed it against a pipe in one of the compartments on the top of the vast stove. In a moment, a flame danced up. He did the same with a second compartment, and set a frying pan on each. With nonchalant elegance, he cracked a dozen eggs one by one into a white china bowl, then filled his fingers with salt from one of the little crocks nearby and cast it across the mixture. He did the same with a pinch of ground pepper, then poured from a jug a stream of thick cream into the eggs. He beat them briskly with a fork in wide circles.... The eggs seemed almost to leap into the air as the whisk lifted them up and brought them back into the bowl. ... For a few seconds he simply watched the mixture settle, then he added a pinch of herbs to both and began carefully to agitate the pans, one and then the other, and, taking up a metal tool rather like a flat spade, worked quickly around the edges of each, prodding, scooping and tucking. After some minutes he picked up each pan and tapped it on the stove... .

"He set down the pans where the flame had been. The egg mixture continued to sizzle and steam. When the hissing ceased, he took his metal tool and folded each omelet upon itself. Then he tipped each pan, letting the concoction slip elegantly onto a large blue plate. This he brought to the table: two perfect, soft, unblemished yellow semicircles, smooth and shiny as porcelain." (pp. 237-238).

The final scene in the Reform Club kitchen takes place during a very important banquet for a visiting dignitary -- amid the fear that the poisoner will strike again. As a result, Avery and several high-placed members of the club volunteer to taste the dishes that are being prepared and thus attempt to prevent another disastrous tragedy. Thus the food is tasted with both fear and enjoyment, and the descriptions become amazingly vivid!


"The sense that every mouthful might be one’s last added a kind of zest to the occasion, and I sat down with a peculiar sense of anticipation. I was reminded of the battlefield in the moment before a skirmish. ...

"We began with the soups. For me, potage à la Victoria, a pale golden, thickened veal broth garnished with parsley and cockscomb seeds. My spoon trembled slightly as I brought it to my lips. I grinned and took it. It seemed to me the acme of warmth and meaty fragrance; made the more so, I suspected, by the lingering sense of danger. I took another mouthful." (p 372)

Needless to say, the conclusion of the book is a triumph for the detectives. If you are a lover of mystery AND good food writing, don't miss this!

My culinary reading group read a biography of Soyer, Relish: The Extraordinary Life of Alexis Soyer, Victorian Celebrity Chef. by Ruth Cowen. The Devil's Feast was much less historical but much more fun to read! To conclude, here is a more complete quotation of Carter's brief sketch of the life of Alexis Soyer.


"Alexis Soyer (1810– 1858) deserves to be far better known than he is. ... He was the first real celebrity chef, a brilliant, inventive cook and a shameless self-publicist. In style, one might describe him as part Heston Blumenthal, part Jamie Oliver. He had a line in crazy (and, to our palates, probably slightly disgusting) fantasy dishes (for example, desserts made to look like roast lamb with all the trimmings) and, at the same time, a genuine mission to educate the British— the British poor, in particular— to eat better and more nutritiously. From his early thirties, he was in London and involved in improving the food in hospitals and workhouses. He published a series of best-selling cookery books ... .

"He was a champion of seasonal and simple dishes: the energetically sociable writer W. M. Thackeray would cancel prior arrangements in order to eat his bacon and beans. ... Soyer was also, for his time, unusually generous to female cooks. He said he liked having them in his kitchen; they were better tempered and less dramatic than men.

"He comes over as an irrepressible, joyous, sometimes ridiculous figure, manically energetic, dreadfully sycophantic to the rich and titled (who were often unpleasantly snooty in return), appallingly pretentious (he called the gas stove he invented the Phidomageireion— apparently, Greek for “thrifty kitchen”) and barely literate— in English, at least, relying on a series of secretaries to transcribe his words. He seems to have been terrible with money.

"He was also a brilliant logistician, inventor and innovator on a grand scale. In 1855, he went out to the Crimean War at his own expense to overhaul the desperate state of army catering, and ended up completely reorganizing the entire provisioning of the British Army. ...  It is, perhaps, not surprising that he died aged only forty-eight, in 1858." (The Devil's Feast pp. 413-415).

Mae,
This certainly sounds like an interesting book about this intriguing chef. Thanks for the in depth review. Sounds like a book I would enjoy. Love your photo as well.