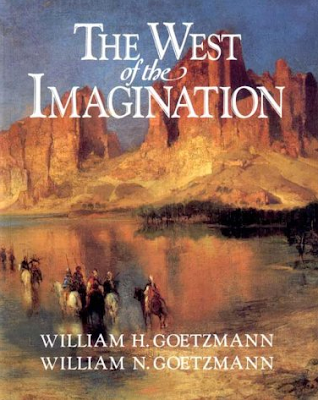 The West of the Imagination by William H. Goetzmann and William N. Goetzmann examines the work of a number of artists who depicted the American West. The authors begin with painters in the early 19th century whose paintings documented the first look at the frontier, the far west, and the native Americans' traditional ways of life. They proceed to describe the activity, the subject matter, and the accomplishments of Western painters and eventually photographers.

I learned of several artists about whom I knew almost nothing, such as George Catlin, who painted portraits of American Indians in the early 19th century, and created the only record of some tribes that died out soon after. I can't begin to list all the fascinating artists and historical insights that were discussed in the book!

One part of the Goetzmann's narrative that I find very interesting is the effort to place these artists in the context of art movements and developments during the century. Many were trained in European art schools; some were immigrants, others born in America. The authors try to value them not only for their documentation of the early West, but also for their accomplishment as artists. I must admit that most of my life as I've looked at these works, I've only seen the documentary side, and I'm now thinking a somewhat different way about their goals and what they created.

I'd like to quote what the authors say at the end of the book, which illustrates what I'm getting at:


"As we come to the conclusion of our survey of the many forms of Western art, it is important to ask the question what have we, or can we learn from it? What can we learn about America and about Americans as well? Western art, as we have seen, embodies many themes and contains, like the West itself, many possibilities. Take nature itself. From the beginning, a large number of Western artists have formed the culmination of a romantic naturalist tradition that reaches back beyond the European romantics like William Wordsworth to a pantheism beyond the edges of history. By creating an object, usually one that condenses a visualization of nature into a single frame, Western artists have created a series of sacred spaces in the American landscape where people go to match their views with artists like Bierstadt and Moran, to effect, like Ansel Adams most recently, the ultimate, sublime connection between art, nature and God." (p. 430)

As I read, I realized how many diverse museums and exhibits I have seen about the West and the artists that depicted it, and found that the book gave me new insights into what I had seen. I also thought quite a bit about the numerous trips through the modern West we have taken. Some of the art exhibits that I want to think about more:

I'm hardly capturing my reaction to reading a book that links to so many experiences of the American West, both travel and museum-going. I'm grateful to my friend Olga who gave me this book!

Do you remember the PBS series on this book in the 1980s? It was brilliantly photographed and I recall it being very interesting but I wasn't aware of the book. My cousin owns a western art gallery in Colorado -- mostly older, dead artists. I suspect he's seen the book. I think this is one I must consider. It sounds fascinating with the combination of art, history and biography. Thanks for the recommendation (check to see if the series is on DVD. It is old, so maybe not...)

The book mentioned that it was linked to the series, but I don't believe I ever watched it.