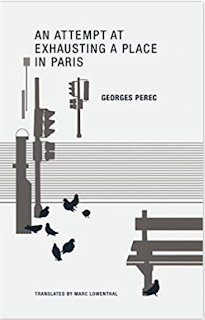 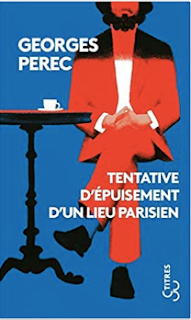 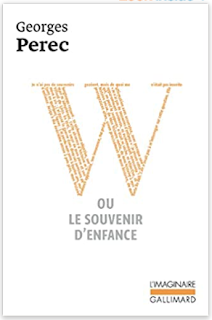 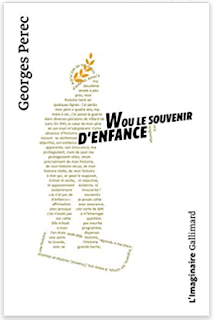 Continuing with my brief exploration of the life and work of French author Georges Perec (1936-1982), I have been reading Tentative d'épuisement d'un lieu parisien (An Attempt at Exhausting a Place in Paris) and W ou Le souvenir d'enfance (W, or the Memory of Childhood).

The first book reports on Perec's observations during three consecutive days in 1974 when he sat in Place Saint-Sulpice in Paris. (It was easier to obtain the translation, so I read it in English.) The second book is a dual narrative, partly of his childhood, published in 1975; I read it in French with help from only translation programs. From the biography that I read recently (blogged here), I am aware that the mid-seventies were a highly productive time in Perec's life as a writer, and so I decided to read (or, for W, reread) these two books.

Exhausting a Place in Paris

An Attempt at Exhausting a Place in Paris is even more unusual than most of Perec’s eccentric output. From a café or a park bench in Place Saint-Sulpice he took notes on everything he saw -- or at least everything that interested him. And it's surprisingly interesting and readable because... well, because Perec. For example, he noted the numbers of the city buses that drove past or stopped, and where they were going, as well as noting tourist buses. He described the passers-by and their clothing and what they seemed to be carrying. He described cars and motor scooters. Occasionally he saw someone he recognized. It's all documented.

There is obviously no plot or much to summarize here. But one thing struck me: there's a cliché that claims that the French do not eat while they walk on the street. Unlike Americans. This is evidently not true. Perec sighted many such people.

"A woman goes by; she is eating a slice of tart. A couple approaches their Autobianchi Abarth parked along the sidewalk. The woman bites into a tartlet." (p. 34)

"A girl with short braids wolfing down a baba (is it a baba? it looks like a baba.) A woman with a baguette. Another one." (p. 21)

Perec also eats and drinks in the cafés, while watching -- sausages, a Camembert sandwich, coffee, Vittel water, and so on. But this is ordinary while sitting in cafés. I think it turns out that eating while walking on the street in Paris is also ordinary. Or, to use Perec's own term infra-ordinary.

A Memory of Childhood

W ou Le souvenir d’enfance contrasts the very few memories Perec had from his early childhood to an increasingly violent and horrifying vision of an exotic society on the island of W somewhere beyond the Strait of Magellan. His loss of his childhood — especially his lack of any traces of his mother — disturbs him deeply, and he attributes this gap in his otherwise very excellent memory to the horror of being taken from his mother: he just barely remembered her turning him over to the Red Cross to be evacuated from Paris. He remembered even less of his father, who had volunteered for military service and died in one of the only battles in which France tried to defend itself from the Nazi invasion.

Perec the writer, as an adult, could muster only the vaguest memories, augmented by a few documents and relatives’ accounts, of being hidden first in the countryside, then in a boarding school for children including refugees, and then again in the countryside — but never seeing his mother again. He eventually learned that she was unable to escape Paris and was rounded up and sent to the camps; she eventually disappeared at Auschwitz, along with most of the Jews of Europe. But he didn’t know this as a child, when he knew only that he must never reveal anything about who he really was. His struggle to conjure vivid memories is painful to read.

Between the chapters about his experiences before the age of 9, when he returned to Paris and life with an aunt and uncle, Perec included a very complete description of the Fascist life of the inhabitants of W, where all the male inhabitants were athletes engaged in formal and very violent games, and the female inhabitants were imprisoned in barracks that “protected” them from the men. While my summary makes this sound obvious and clumsy, the contrast between the two parts of the book is subtle and powerful.

Besides the constant contests among the athletes of W, there were occasional races where the women would be forced to run away from the men, and when they were inevitably caught, the men would rape them, while the crowds of spectators watched. The society of W is described in excruciating and vicious detail: a much worse fantasy than even the worst Nazi society that Perec was coming to grips with in his early autobiography. Even the non-rape contests included rules that allowed the athletes to attack one another, disrupt the flow of races, use unfair holds in games like wrestling, and wear pointed toe shoes to kick and maim their opponents.

It’s not hard to figure out what Perec means by the two opposing parts of this book. The cascading nightmare created by the Nazi occupation and imposed on a small child and the helpless adults around him — and the cascading nightmare of W, an imagined dystopia with the worst human conditions possible. In the last few paragraphs, Perec brings these two seemingly separate worlds together. What a horrifying book!

They sounds interesting, different than my usual reading.
Thanks for the reviews. Have a happy weekend.

You read the most interesting books. Great reviews. Have a very nice day.

Could he have read what happened at the Camps and used that to create W? A place he could put all his emotions surrounding the loss of his mother.

Hello Mae, :=) The last book you wrote about does not appeal to me, and I would not read it.I like a story with good dialog, and an interesting plot of some kind, but not horror, torture or persecution of Jews, which makes me feel anxious, and it has already been well documented by people who have experienced at first hand the horrors of war. I know that any piece of writing is supposed to make you "feel" something, and if it doesn't, it's probably rubbish, but it's just not for me. The first book sounds entertaining in it's different view of the world by observation. Thank you for the reviews, and enjoy your Sunday. :=)
All the best.

I enjoy books set in Paris and France in general but not during wartime any more (hits too close to home). Thanks for sharing about books I wouldn’t otherwise know about!

My hubby has had to avoid some books, like this. He's been a bit on the edge these days.

An Attempt at Exhausting a Place in Paris is my current read, and it's my first Perec. I didn't know anything about his background until I read your earlier post about him. I think I am most astonished that he was able to find any sort of contentment in life after having experienced the horrors he experienced in childhood. An Attempt at Exhausting a Place in Paris reads almost like a meditation, and a few of his books seem to have been written almost as a game, and W ou Le souvenir d’enfance seems like therapeutic writing. Perhaps all of these were ways he was able to use his writing to process and cope with his childhood losses.