Before my review of the novel Night Shadows, which takes place in Akranes, Iceland, here are some photos of the town which I took on our trip to Iceland last year. 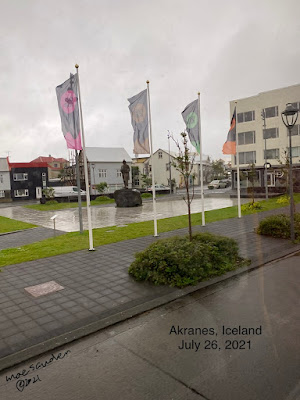 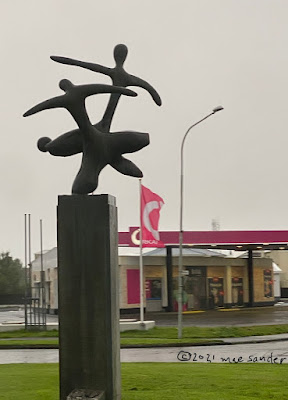 I was curious to recall what the town looked like because I just read the new police procedural Night Shadows about a murder and police investigation in Akranes, which was just published this week. Eva Björg Ægisdóttir's new book is the third in the Forbidden Iceland series. I reviewed The Creak on the Stairs, the first in the series, here: Icelandic Noir. I have read the second, Girls Who Lie, but never reviewed it. The third book appeared last week, just in time for our next trip to Iceland, this time continuing to Greenland (assuming that nothing bad stops us, like Covid, airline disruptions, Icelandic volcanic eruptions, or disasters of unpredictable nature!) 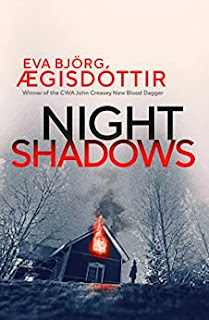 At the beginning of Night Shadows, there's a horrifying murder, and detective Elma, who also starred in the first two novels, is assigned to investigate. She's level-headed! But she experiences many challenges and dangers as she investigates. Of course she and her supporting colleagues discover all the details of the crime eventually, but it's a tricky process and makes great, suspenseful reading. The action all takes place in the autumn of 2019, so it's recent but also before covid!
Reading the details of the very obscure Icelandic town of Akranes was fun. Here's how Elma saw it as she went to a small house to question some of the people, Fríða and Hrafnkell, who had a connection with the crime:

"Akranes had undergone profound changes since Elma was young. The population had doubled in size, from four thousand to eight thousand, and the urban area had spread out over the flat Skagi Peninsula, spilling over into the surrounding farmland and creeping ever closer to the foot of Mount Akrafjall. Among the orange blocks of flats where Fríða’s boyfriend, Hrafnkell, lived, there was one building that stood out from the rest. It had once been a small, traditional farmhouse with horses grazing in the paddock, but now it looked lost and out of place, swallowed up by the modern developments." (p. 123).

Here are the memories of a young woman whose Icelandic father had once brought her from Amsterdam to visit his native land:

They "had stayed with her grandparents, played card games like Olsen Olsen late into the evening, gone swimming in geothermally heated pools, and visited waterfalls, hot springs and wide lava fields. She could still remember what it had been like to stand in the middle of the petrified lava flow, feeling as if she were on another planet. In her memory, the trip had been perfect." (pp. 143-144).

Also, something that in a way made me think of our brief bus trip through the town last year:

"The houses were mostly single-storey and the ones they were passing appeared rather rundown. The majority were plain, white boxes with A-line roofs, lacking any decoration or aesthetic appeal." (p. 158).

I also liked the way home-made food played a role in the several families involved in the plot.

A dinner party: "The bottles of Bollinger they’d drunk with the starter, the roast that had melted in the mouth after its long sous-vide cooking, the Hasselback potatoes. Everyone had praised the food, and afterwards they had polished off a bottle of ten-year-old malt that Villi had brought with him."(p. 18).

A nice domestic scene: "Mother and daughters were in the kitchen, seated at a round table that was laid with a plate of pancakes and a tray bearing bacon and fried eggs, as well as strawberry jam, maple syrup and melon slices." (p. 156).

A simple snack: "Elma sipped her cocoa and felt the hot liquid warming her all the way down to her stomach, then took a bite of her cardamom doughnut." (p. 224).

A kind-of dinner: "Elma got up and looked in the freezer compartment of the fridge. Rejecting the frozen pizza, she settled for a bowl of muesli and buttermilk instead." (p. 228).

Like the two earlier books in the series, Night Shadows is very enjoyable to read. Good plot. Good characters. Murderers a bit too cold-blooded, but with well developed personalities. A good mystery in every way, I think.

I had to check and see if I had been through Arkanes when I visited Iceland in 2016, but we just missed this town by the looks of it. This sounds like a good mystery so I'm adding it to my wish list. Thanks for sharing Mae. hugs-Erika

"Night Shadows" sounds like a good read. I like they way you tied food and drink into the T Day party. Happy T Day

Food is a clever technique. I'm working my way through Donna Leon books and I found out that they've published a cookbook of their Italian dishes.
(ツ) from Jenn Jilks , ON, Canada!

Yes, there’s a Donna Leon cookbook — it actually introduced me to the series. I wrote about it a few times, first here:
https://maefood.blogspot.com/2010/12/commissario-brunetti-eats-lunch.html

For whatever reason, Iceland has never called me (though I can say I've been there -- at the airport, switching planes!). But those who have find it fascinating. I think the mystery series might be an interesting intro.

What an absolutely fabulous review. Loved how you brought food and drink into the mix.

Great review Mae. I'm holding thumbs you make it to your destination, with all your luggage!

What a treat to read a book that takes place where you've been. It would add an entirely new level of appreciation.