My Favorite Metro Photo: Faded but not Forgotten 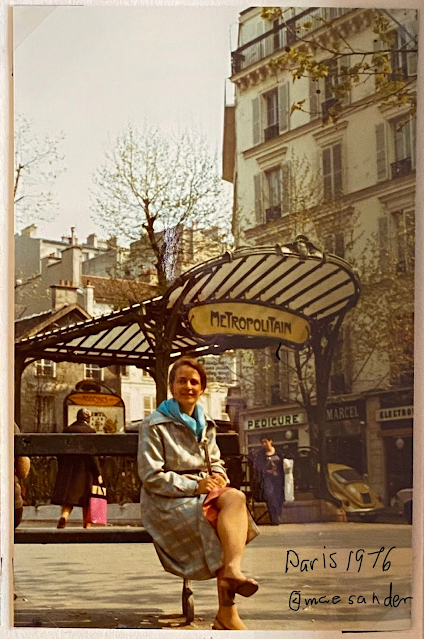 It’s Paris in July in the world of bloggers, and I’m writing about books set in Paris! My favorite photo, showing me in front of one of the most famous metro entrances, has appeared in my blog posts before. I've included it again today.
The Metro is one of my favorite Paris institutions. In July 2020, I wrote about it here:

Pursuing my reading theme of Paris-based fiction, I have chosen a collection titled Paris Metro Tales. Many of the stories take place near or in a particular Metro station; a few even take place on the train between stations. Because each Metro stop is named for a street or square near to the entrance, a habitual rider gets to know these place names even if one never gets out and looks around the neighborhood. The above-ground places that are never seen sometimes seem to be a mystery.
I thought the stories in the collection would provide some insight about these unseen places, but most in fact do not. Only a few really focus on the Metro and its stations. In fact, they are more about the area or its history. Several of the stories were actually written prior to the design of the Metro system and construction of the tunnels and the famous entrances. Quite a few of these stories describe Paris streets and street life, or other features of life in the city, but aren’t really strictly about the Metro.

A Few Stories Are Really about the Metro 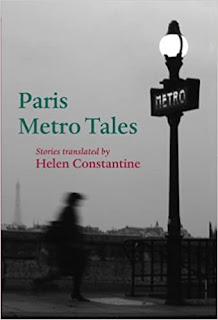 A few stories really have a focus on the Metro, with very specific details about characters riding on the trains or events within the stations. The most interesting to me was a story titled "Rue des Larmes" by Frédéric Fajardie (1947-2008). The central character of this story is very disoriented from the start, and it’s quickly clear that he has sustained a beating of some kind, with severe head wounds. He’s evidently been participating in some sort of violent street demonstrations.
The story, told as a stream of consciousness, is fiction, though based in real events; in particular, one of the character’s fleeting memories is about a police massacre in 1962, which took place in a Metro Station — a horrifying event!  The disjointed memory as he struggles in the street:

“On his right he saw the Philippe Auguste passage, at the far end of which he thought he could make out a small factory. Unless it was a large shed. Militant! Of course! How could he have forgotten such an important thing! He had just taken part in a demonstration. A demonstration intended to honour the memory of the eight people murdered at the Charonne metro on 8 February 1962: small chance of him forgetting the date because he was at that demonstration as well, when he was only a little boy, holding his father’s hand. He wondered at being able to recall all that in such detail.” (p. 106)

And the editor’s note on the  Charonne Metro Station:

“On 8 February 1962, at the end of the war of Algerian Independence, eight people suffocated at this metro station while taking refuge from the police who, led by their chief, Maurice Papon [convicted, in 1998 for ‘crimes against humanity’ during World War II], were putting down a left-wing demonstration against the far-right nationalist OAS (Organisation de l’Armée Secrète). Fajardie recalls the violence at the metro in his story ‘Rue des Larmes’ (‘Street of Tears’).” (p. 297)

For a very interesting and detailed description of the 1962 massacre see: “A Massacre in the Metro.”

“Confronting the Present" by Andrée Chedid (1920-2011)  is a story that's really about the Metro. It describes a man who loses his sense of time when he is riding the train --

"It was the rush hour. It was extremely crowded in the metro. The seats were folded up to allow the stream of passengers to invade the whole compartment. For a moment Wallace doubted their existence—and then doubted his own."

And then: "At the exit, a young man with a lot of hair and a leather jacket held the door open for him. He hurried through, thanked him; at the same time sorry to leave behind that very special smell of the Paris metro. A sharp-sweet odour which he sometimes caught a whiff of back home in his house in the woods." (p. 199 & 201).

Oh, yes! I know the smell of the Metro. Sometimes when you walk over a street grid in certain neighborhoods, where the trains are not far beneath the street, you can smell that odor wafting upwards.

Another story really about the Metro:  “Romance in the Metro” by Claude Dufresne (1920-2005). The central character is a punctilious man with no imagination. The story begins:

“Leaving home at 8.03, Hilaire Robichon reached the Porte de Vincennes metro at 8.12 precisely. Every morning for the last twenty-three years, Saturdays and Sundays excepted, he arrived there at the same time, at the same metro station. Time to buy his paper, get his weekly pass punched and reach the platform, and catch the 8.14 every morning, which set him down at Concorde exactly thirty-one minutes later.” (p. 252)

The remainder of the story seems like an imagined fantasy, but there’s a surprise ending!

In my opinion, this story collection as a whole is not successful. The stories just don't have enough in common with one another. The fact that they take place in Paris doesn't give them enough connection. I expected to read tightly related tales centered on the Paris Metro. That was not the case, and it took me a while to adapt as I read. First, as I said, the link of many of the stories to the metro is tenuous -- sometimes there's just a mention or it's in the neighborhood.

Another weakness of the collection is the editor's failure to give enough background information. Because these stories are set in many different eras, in fact different centuries, it would be nice if the date of composition had been given. You have to figure it out as you read, based on the biographical dates for the authors given in a list at the end of the book. Eventually I got used to this as well.

Reading stories with so many different themes and approaches made it hard for me to concentrate. I found myself forgetting what had happened in some of the stories, as I continued with something completely different. Or maybe some of the stories were just plain forgettable. All in all, I was disappointed in this book.

Hello Mae,
Thank you for the book reviews. I like the photo of you at the Paris Metro entrance. Have a happy 4th of July weekend.

Too bad the book didn't work too well.
The picture is great!
https://wordsandpeace.com/tag/paris-in-july/

I enjoyed reading about your take on this book and the Metro that you experienced. I'd like to know what the scent of the Metro really smelled like. I can tell you were not fond of this book because it was not cohesive. I've read a few stories like that, and I often can't relate a tale to one six stories back. I absolutely LOVE the photo of you in 1976. I bet you were wearing hose with those shoes, too (grin)!

Thanks so much for sharing this second look on the 2nd. I enjoyed it as a first look for me.

I think someone could write something interesting about the Metro. Some of those stations are very interesting. And some of the art nouveau entrances, like in that great photo of you, probably have a fantastic story too. Too bad this book didn't approach the Metro in a more interesting way. I still enjoyed reading your write up also. hugs-Erika

@Erica -- Indeed, many books have been written about the history of the individual metro stations and the neighborhoods and people they are named for. The Art Nouveau entrances were designed by the architect Hector Guimard, one of the inventors of the style. Much has also been written about him, and his work is frequently displayed in museums.

I listed two of the metro books in the post that I linked to: https://maefood.blogspot.com/2020/07/the-paris-metro.html

You really work hard to produce this exemplary blog! I tip my hat to you

Hi Mae, you have not mentioned which Metro entrance you are sitting in front of? It may be famous to Parisians or regular visitors, but for people who've not been there, or only have visited infrequently it may be unknown. It's it the Guimard entrance at Place des Abbesses in the 18th Arrondissement?

This makes me want to post a flashback post of when I was in France. Fantastic place and You have some many stories after visiting places like tht.

What an interesting post. I found the info about the metro massacre very interesting as I have just read a book (a novel) set in this period of French/Algerian history. The book is called This is the Night they come for you by Robert Goddard. I will feature it soon on one of my book reviews. It's one of the best books I've read for a long time.The demonstration and the massacre are featured in the story. After finishing the book I immediately Googled everything to find out what is real and what is fiction (the author also writes a bit in the epilogue). Most of it was history.
Hugs,
Lisca

What a pity the collection didn't work for you!

I almost ordered this collection a few days ago. I'm glad I waited for your review.

That's such a fabulous photo! An interesting concept for the book but it's a shame it didn't quite deliver.

Great photo of you from 1976! Yeah we have used the Metro to get around Paris. It's a good way.