“The dappled sunlight is beautiful. It’s like being at the bottom of the sea here. I wonder if this is how fish feel when they look up at the surface. Green rays of light flicker and waver. Three people stand at the bottom of the water, gazing up at the light on the surface. An innocent yearning shines in the eyes of all three, for the faraway surface that cannot be touched. They stare in silence at the unreachable light, at a future that will never arrive.” (Fish Swimming in Dappled Sunlight, p. 174) 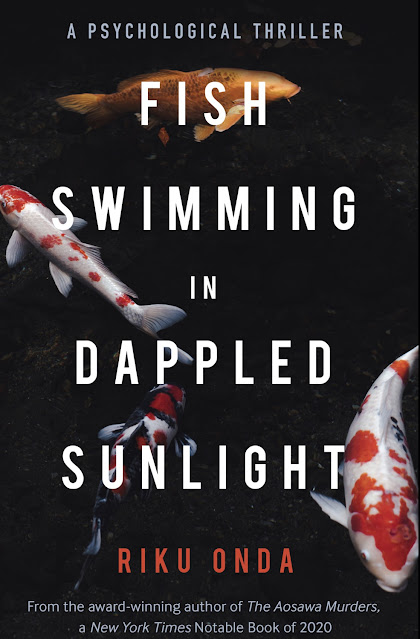 Two narrators alternate this very tense and emotional tale, but they seem to be reading one-another’s thoughts, because the narrative is continuous in time, and in fact lasts exactly one night. This is an incredibly constructed psychological study, where two people make an incredible effort to remember their past, and the result is constant surprises for them and for the reader.
The two at first seem to be lovers breaking up after living together a long time: in other words, a pretty ordinary situation. The man has a new lover, and has already moved his possessions to the place where he will live with her. In fact, the apartment contains almost no furniture, and they spend most of the night using a suitcase as a table for eating and for holding an ash tray. Their alternating interior monologues describe their relationship:

“We often used to go away together, just the two of us. It was a way of making up for the blanks in our past. Wherever we went we had a good time and enjoyed each other’s company. It was refreshing. We didn’t have much money and we both liked walking, so often we simply wandered through strange towns, deep in discussion of all manner of topics. I have a collection of pictures in my mind, like stills from a movie, of our time spent in this fashion.” (p. 40)

Quickly, we learn that the two are not in fact lovers, but are siblings — in fact twins. They share many secrets and anxieties, and they talk and quarrel all night about the meaning of a particular event in their past. Each one thinks the other was responsible for a tragic death of a man that they were with. As the night goes on, they probe their memories, and with occasional searches of the internet, they develop amazing insights about their entire past. I can’t tell you more: it’s a mystery, and that would spoil it.

What I like best about this novel is the interesting way the two narrators think about themselves and their past. Remember, the entire novel is their alternating internal thoughts during one night. Here’s an example: the thoughts of a man returning to an apartment with some drinks and other things to provide for a night of confrontation for the last time with his partner:

“The bag of drinks is heavy. My hand has gone numb where the handles are wrapped around my fingers. Food and drink weigh a lot more than you think. I learned that for myself when I moved out of home after high school and began living on my own. Being a poor student, I used to cook to save money. I never had a taste for fast food like most of my generation. Potatoes, onions, cabbages, apples, salad dressing, canned tuna. This kind of food has weight, like a living thing. Shopping at the local supermarket taught me that, as I gradually got used to getting meals for myself. Luckily I didn’t dislike cooking, and I bought in bulk when possible, so I could experiment with all kinds of dishes. Once, when I was at a friend’s place, I was surprised to learn that practically all he ever ate was instant ramen and prepared food out of a packet. He got a supply of these by playing pachinko, which he was addicted to, and took away his winnings in the form of instant foods.” (p. 18)

This sounds like an interesting narrative premise with the perspectives of twins. It sounds rather fascinating.

I love titles that make you wonder. The story sounds very interesting. Enjoy the book. Have a great day.

Wow, sad.
I just come home from a good, local butcher.
I´m a beginner, asked the man what he thinks how much I need for my planned dish.
His answer: He has no idea, he eats convenience food.

Hope the couple finds a way. Reminds me of my Brother and I...

That is a creative book title!
(ツ) from Jenn Jilks , ON, Canada!

I started this but was sidetracked by a zillion other books. I definitely will get back to it.

The story sounds intriguing and simply fascinating. You make me want to read this book, Mae.

I like the idea behind this book. Thank you for sharing it with us.