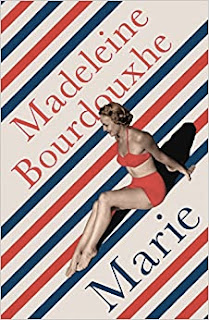 Marie is a novel written in 1940 by Madeleine Bourdouxhe (1906-1996). The first scenes of the book take place at a seaside resort, but most of the story takes place in Paris. Although the central character, Marie, has no children, she works only a few hours a week. Her days are mainly occupied with housekeeping and a kind of enforced idleness. Her husband Jean has an office job, which is endangered by economic hard times. They have a pleasant apartment, but eventually must move from Paris to a distant and uninteresting town because of his employment.
The novel describes how Marie, a woman of about 30 years old, has flirtations with two or three men. One of them, especially, a younger man she picked up at the beach resort, becomes her lover. She is also involved in a distant way with her parents, and in an intimate way with her sister, who provides some drama at the end of the book.

That's the bare bones of the story. Bourdouxhe wrote Marie in Paris in 1940, but it wasn't published until 1943 because she wanted to publish with a company that was not cooperating with the Nazi occupation. Her work was largely forgotten until the 1990s, and this translation from the original French dates to 1997.
The central focus of the novel is in Marie's head, beginning with her awareness of the blazing sun and associated sensations as she interacts with Jean and their friends in the initial scenes.

"She hears Lucy saying: 'Marie, you love your husband very deeply; you've managed to find complete fulfilment in your love; you are the only one amongst us who really knows what happiness is.' Smiling, she always replies: 'Yes, it's true.' And now, recalling that exchange, that same mysterious smile returns to her mouth. She turns round and stretches full out, her face towards the ground; the smile has disappeared. 'What is happiness?' she asks herself. 'What does happiness mean?'" (p. 6)

This is the theme of the book: how Marie seeks happiness. Does she find it? This seems to be the conundrum left to the reader. She searches in many ways, leading to a very interesting atmospheric feeling in the book. There are many aspects to this feeling, but one is the very big role that the streets, metro stations, cafés, restaurants, and other Paris places contribute to the novel. Here are a few quotes that illustrate this role of the city itself:

"She is hungry again. She orders a sandwich and bites into it with her mouth wide open, holding the bread with her whole hand. No one looks at her or bothers about her; she feels happy. In this vibrant city, with its noises all around her, she feels completely, delightfully alone. A flower seller passes and holds out a bouquet to her. Oh, not violets, please... " (p. 31)

"The night would always climax in a cacophony of delight when they reached Les Halles and saw the beautiful vegetables piled up in the icy dawn." (p. 84)

"She started by walking aimlessly, so elated was she to rediscover the fresh air outside and the bustle of the streets -- but she walked quickly, in long strides, propelled by a physical need for action and speed. By instinct she went back towards the Right Bank, to the Paris she loved: a strange quadrilateral, enlarged and hear-shaped, delineated more or less by the stations Buttes-Chaumont, Bastille, Opéra and Clichy. This was a Paris that people who came from elsewhere found less than dazzling -- but for Marie it was the true heart of the city, where the streets, the houses, the bars, teh people were the most Parisian in the whole of Paris. ... She went into a restaurant in the rue des Petits-Champs and ordered meat, vegetables, cheese, and cider." (p. 116-117)

The very end of the novel shows what Paris means to Marie and its role in her inner life:

"These reflections brought Marie to a halt. She stood stock still on the corner of a Paris street, with dreamy eyes and a broad smile. In the road two workmen were setting up the boundaries of a zebra crossing... One of them looked up and asked her 'What is it, my lovely: are you laughing at the angels?'"

She replies "to herself rather than to him: 'Actually I'm smiling at you.'" And the final paragraph of the novel:

"Just as she smiled at all the gentle people who passed: at two children who lingered to look at her, satchels under their arms; at a woman in a hurry; at a young soldier who had no desire for victory of any kind: at all these gentle people touched by the simple grace of being alive." (p. 141)

Reviewers compare the author to many feminist and modernist authors of the time that she was writing. I find that the work still seems very much alive, very much in a spirit that speaks to people more than 80 years after it was written. And I love the way that it invokes an atmosphere of Paris that seems to me to exist even now.

Did you think Marie found happiness? I guess it is better to leave it open to the reader's interpretation than having the author tell us.

Another great book review, thanks for sharing.
Have a happy weekend.

I enjoy the backstory that you provided with your review!

This one is a new one to me. It sounds interesting but I'm wondering like Erika -- do you think she's happy?

Annoyingly, this comment will lead you to a no-longer-existing blogger blog. But you know who I am as you kindly commented on my last post. This seems like an evocative and thought-provoking read. I'll look out for it - thanks.

Sounds interesting, it's new to me too.

A great review. I love the description of her eating the sandwich. Have a great day.

I have really been enjoying your French themed posts! Thank you.

Your chosen excerpts remind me of my experiences in Paris, with familiar names of metro stations.

True happiness - I hope we all have it from time to time at least!

I am not aware of this novel, or author, at all, but I am intrigued by the era…and a woman’s search for meaning/happiness. Most often, the world cannot provide it, but that would take the thunder from many books, wouldn’t it? I like how Paris is highlighted in her life.

Great review! I was not familiar with this book

It's a touching story and a nice review.