"For a statistician, he's a dreamer. He has green eyes that make him look like a number theorist, even though he has long hair like a game theorist, and wears the Trotskytizing small steel-rimmed glasses of a logician and the holey old T-shirts of an algebraist -- the one he's wearing at the moment is especially shapeless and ridiculous." (Hervé Le Tellier, The Anomaly, p. 108-109) 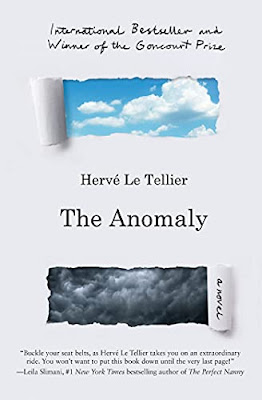 How could I resist these clever mathematician stereotypes? They come from The Anomaly -- the best-selling novel by Hervé Le Tellier, whom I found to be a highly inventive and readable writer. I especially enjoyed Adrian, the mathematician in this description, who was one of ten (or so) delightfully sketched individuals in the early chapters of the novel -- residents of many places from New York to Paris to Africa, or in Adrian's case, a former resident of Princeton, NJ. Slowly, it becomes apparent that the only connection between these individuals is that they were all on a particular Air France flight from Paris to New York on a particular date in March, 2020. 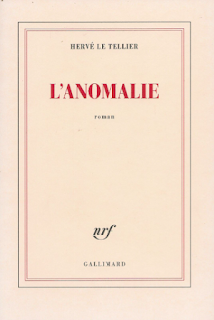 Le Tellier's approach to narrative writing reminded me of the earlier French writer, Georges Perec, in the way he chose to show a huge number of characters in a kind of a frame; however, at times he outdoes Perec's off-beat approach to multi-faceted forms of writing. In fact, Le Tellier (born 1957 in Paris) is identified as an author and a linguist and a mathematician -- so of course he is a very long-term member of Oulipo, as was Perec. He has even been its president.
Besides portraying so many characters who have so little in common with one another, the book is insanely allusive. It mentions many types of popular culture like the book A Hitchhiker's Guide to the Galaxy or the film Close Encounters of the Third Kind. It has allusions to classic literature. I probably didn't get all of them. There's a reference to If on a winter night a traveler by Italo Calvino, another Oulipo member. There are scenes with appearances by the President of the United States (unnamed), the President of France, Stephen Colbert, and other celebrities. There's an Afro-pop musician who inspires lots of references to popular music genres including Elton John. There's a deep discussion involving a meeting of religious leaders of various sects of Islam, Christianity, Judaism, and Buddhism. When you read it you are supposed to be impressed by the breadth of the author's knowledge.
The ten main characters presented in the initial vignettes aren't hard to follow, but I found myself wishing for more about some of them (like Adrian) and less about others (like an American lawyer who has ethical conflicts). Minor characters also abound! A memorable character with many aliases is a contract killer, and the first vignette of the novel is a description of his debut as an assassin -- violent! Another character, named Victor Miesel, is himself an author, who writes a book named The Anomaly. Deep.
Miesel consciously considers his similarity to Perec: "He jots down: An attempt at exhausting an improbable place. Wait, no. Why walk in Perec's shadow?" (p. 200) Then he starts to record his observations of the airplane hangar where he and all the other passengers have been detained after the flight. Just like Perec's Attempt at Exhausting a Place in Paris which I read a few days ago. I see layers of irony.
The Anomaly was published in French in August, 2020, and appeared in English translation in November, 2021. The events in the book, which take place from the time of the Air France flight in March 2020 until the following summer are very strange events; in fact, they are surreal or science fiction or paranormal type events. I think the book accidentally became even more surreal because -- having no doubt been completed months before the original French publication -- it assumed a continuing normal world in 2020. This fictional world was suddenly rendered abnormal by the surprising fate of the airplane in the novel. However, our real world, as we all know, went crazy in its own way at exactly the moment when the surreal plane landed: mid March of 2020. Just deal with it!
Too complicated for me. I tried not to overthink all this, as I read and enjoyed the book, or at least most of it. I would say that having built up a surreal set of very dramatic events and a vast cast of characters dealing with the events, Le Tellier wasn't as good at unraveling his story as he was at introducing it. The last 100 pages or so really weren't as much fun to read as the first 300 pages. But no more spoilers!
A review in the New York Times: "‘The Anomaly,’ Part Airplane Thriller and Part Exploration of Reality, Fate and Free Will" by Sarah Lyall from December 3, 2021, begins thus:

"As you read 'The Anomaly,' by the French author Hervé Le Tellier, you might find yourself wondering what sort of book it is, exactly. Is it science fiction dressed up as philosophy? Metaphysics disguised as high-concept thriller? Neither, both, all. 'The Anomaly,' a runaway best seller in France, where it won the Prix Goncourt last year, lies in that exciting Venn diagram where high entertainment meets serious literature. Its plot might have been borrowed from 'The Twilight Zone' or 'Black Mirror,' but it movingly explores urgent questions about reality, fate and free will. If our lives might not be our own and we end up dying either way, how should we live?"

Philosophy? Well, maybe. The metaphysics (or maybe pataphysics) in this book makes for a very French feel, as I read it. French writers seem to always out-intellectual everyone else, even in thrillers. I'm just not sure when it comes to the urgent question about whether everything we know is just a simulation and whether we really exist. Too facile. I say it's a thriller with a bunch of amusing, self-satirizing, self-referential pretensions, but what do I know? Not as much as Sarah Lyall! My reading plan for this month was to read books about Paris and France that were written by French authors -- to look for a different point of view from the one I'm most accustomed to reading. This definitely satisfied my plan.

After Emma at Words and Peace shared a little about this book on my Goodreads review of An Attempt at Exhausting a Place in Paris, I was inspired to try to find it, and, happily, it was available as an ebook at one of my libraries.

Thank you for your review. In a book like this one, it helps me a lot to see where the book is going; nothing is a spoiler in an odd book like this.

Wow! These are great reviews on the books. I hope all is well in your part of the world. Have a great day.

Awesome review!
I thoroughly enjoyed this book (In French_, and all along also tried to see all the Oolipo elements. Yes, managing to use so many different literary genres in one book was a feat. Including the very last lines, perfect with the plot about the plane (no spoiler, lol), is a gorgeous example of anagram (cf. les anagrammes d'Apollinaire)

I'm a statistician and would LOVE to learn more about this book. I clicked on the NYT review, but they want to charge me to read it. it sounds like something I would truly enjoy, though.

Glad you could satisfy your plan. Have a super weekend Mae.

OMG, sorry for my typo. It's obviously Oulipo, not oo!!