Kiffe Kiffe Demain by Faïza Guène takes place in a part of Paris where no tourist ever goes: Public Housing (HLM) in a suburban immigrant neighborhood -- a banlieu. I chose this novel for my first “Paris in July” review this July because it’s so different from most of the books that have featured in this wonderful blog event over the years. To see what other bloggers are doing for PIJ, check Tamara’s blog.
Doria, the young narrator of the novel, is a native of Paris, but her parents were from a bled -- that is, a village -- in Algeria. As the novel begins, her father has gone back to the village to marry another wife: one that will give him a son, not just the unsatisfactory daughter that she is. 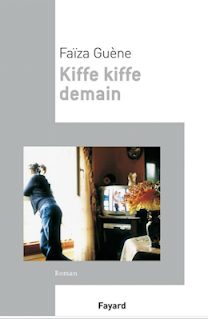 Doria gets many of her ideas of real life from watching the French news shows on TV and from American TV and movies. She is very dismissive of her teachers at school, where her grades are mediocre. She has little respect for the case worker who deals with social assistance to her and her mother. She slightly more trusts her counselor, whom she sees every Monday afternoon.  When she mentions all these parts of her life, she has a biting sense of irony, and a sharp tongue, and she employs a lot of argot (slang) to describe things.

Doria's mother has a number of friends who mostly also immigrated at one time or another from Algeria or Morocco. At least one of them also has a husband with a second wife, who spends half the year with each wife. Doria knows that her father isn't coming back, and she doesn't have anything good to say about him either. She's a hard realist when it comes to her mother, her father, the woman who hires her to babysit, the social workers, and two male friends. It's quite a good read! 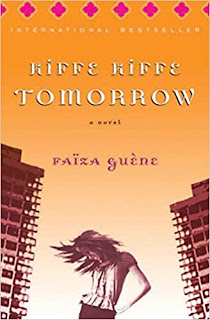 I'm very pleased that I was able to read this book in French, even though I had to use a translator for some of the more challenging parts, like argot: https://www.deepl.com/translator. It's sometimes considered a young-adult book, which might account for my success with the reading level, though it's obviously one of those books that appeals to readers of all ages -- the New York Times in 2006 reviewed the translation, titled Kiffe Kiffe Tomorrow, in the standard book section, not the young adult section.
In an interview at that time in the Guardian, Guène discussed the language of the book: "The French title of the book, Kiffe Kiffe Demain, is an almost untranslatable mixture of appropriated Arabic and 'pure' French. Such linguistic and cultural juxtapositions litter the book's text, as they litter the language of most young people in Paris. 'Take the French language itself,' Guène says. 'Apparently, you must not touch it. It is reserved for the élite. It would be better if people interested themselves in what happens in the banlieues for reasons other than our social conditions. There is a richness and a creativity there as well as an enormous need to express oneself.'" ("Voice of the suburbs" by Jason Burke, 2006)
The author has a new book out last month, her sixth including Kiffe Kiffe. She gave another interesting interview recently, in which she says "There aren’t many representations of Algerian families in France. Mostly it’s caricatures – either heroes or delinquents and terrorists. My way of being honest is to make them complex, neither black nor white." (Interview with Guène, 2022.)

Sounds like a very good book. Glad you enjoyed it. Have a very nice day.

A refreshing choice for a first book for Paris in July, I think.

And I'm delighted (as you must be) that you were able to read this book in French.

This sounds fascinating! Good for you reading it in French. I think I might be able to also, but I would also need a translator as well.

I always wonder when I read a book in translation, which is the only way I can read foreign language books) how close to the original meaning and vibe I'm getting even with wonderful translators. I always get the impression I'm missing a lot.

This sounds like a book I would like to read, though I would have to read the translated version.

I’d like to read this. Thank you for sharing.
www.rsrue.blogspot.com

Certainly a different book. I can't believe from what you described that it was geared for young adults, though. Even I have trouble understanding the title!

I must look into the translator you mentioned. I use Google translate when an Italian phrase stumps me.

I am impressed you can read a young adult book (for the most part) in French. I would have to stick to a very beginning reader.This book actually sounds fascinating. Can I ask what Kiffe means I know demain. I will go look it up. And thanks for sharing Mae. hugs-Erika

I do find intrigue in the ordinary, and a book about les banlieu is perfect. Mais, je suis desole - I couldnt read it in french - you're inspiring!

Well done reading this book in French! It does sound like a different telling of life in Paris!