"The Blessing Way" by Tony Hillerman

Tony Hillerman (1925-2008) published his first book about the Navaho police detective Joe Leaphorn in 1970. While I have read most of Hillerman's books, this one somehow escaped me -- or I didn't remember reading it. I've now made up for that: I read it this week, and I loved it! 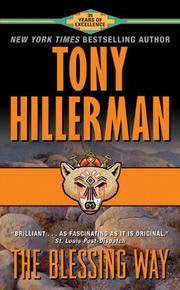 It would be hard to believe that this police procedural dates from 50 years ago, except for some details, such as a character who recalls serving in the Korean War, or another character who was a juvenile delinquent in the 1930s! This novel has all the features that make great reading throughout the entire series. Suspense builds intensely! The plot and characters are vivid. The physical details of the Southwest are fascinatingly described, including ancient Indian ruins, small farms and towns on the Reservation, mountain and desert scenery, and sudden thunderstorms. People see the scenery in various ways: "The white man sees the desolation and calls it a desert, McKee thought, but the Navajo name for it means 'Beautiful Valley.'"  (p. 36)
Hillerman creates wonderful dialogues, especially when Joe Leaphorn interviews people and manages to elicit information by being sensitive to their cultural background (whether they are white or Navaho). He offers various insights about the myths in the Navaho believe system, and about the way people view themselves, their social and spiritual obligations, and their relationships to others. The challenge of belonging to two cultures is made clear. Hillerman quotes beautiful songs and blessings that Leaphorn and others sing privately or in ceremonies.
Food is also used to set the scene, for example, McKee, a central character visiting the Indian Reservation, eats a heavy meal of "lamb stew, floating in fat, boiled corn, fried cornbread, and canned peaches"  (p. 57). Or McKee, camping out, "walked back to the butane cooker, forked an egg onto a piece of bread and folded it into a sandwich." (p. 112).  Or a young Indian alone in the wilderness: "was hungry and there was a porcupine to singe, clean, and roast before he would eat." (p. 5).
Throughout The Blessing Way, beliefs in supernatural animals and witchcraft motivate the behavior of the witnesses and the victims of the evil criminals that Leaphorn is chasing. Witches can turn into wolves and wolves can suddenly walk on two legs as men. Coyotes, owls, and other birds also figure in these beliefs.
Instead of further discussing the plot of this very old novel, I just wanted to find some images of these animals to help my imagination.
Blog post © 2022 mae sander.
Shared with Eileen's Saturday Critters.
Posted by Mae Travels at 6:30 AM

I love this series also, and for some reason I have read this book twice. I think it is because I found several of Hillerman's mysteries as a set on eBay, and this one was the only repeat I had. You are so right about the way Hillerman writes though. Have you read many of his daughter's books once she started to continue the series? hugs-Erika

I always loved his books! Nice find!
(ツ) from Jenn Jilks , ON, Canada!

Nicely done. I know Erika and Divers and Sundry also review Hillerman, but I love the depth to which you share the pages in the book.

I love this series! I've read them all and re-read some of them, and my son has kept them all. Real keepers :)

Great review! I don't know this author, thanks for presenting him

I have read 2 of his books. Love all the photos. Have a very nice day today.

I remember his books were very popular in the 80s but somehow I never got to them. You make them sound good and I love the Southwest in general. Love your animal figures.

I will see if his books are available in my reader app.

Everyone I know who has read these books loves them -- and I liked the PBS mini-series eons ago -- but I've never been able to get into the books. Maybe I need to try again.

Hello Mae,
I love the pottery critters, they are beautiful works of art.
I am adding the book to my reading list. Thank you for linking up and sharing your post. Take care, enjoy your weekend. PS, thank you for leaving me a comment.

I haven't read these books but I'll put them on my list now. I love the beautiful pottery and have a few pieces from when I lived on the Navajo Reservation years ago.

Hello Mae, :=) Great review of an author I do not know, but am now interested to read his book. Thank you for including the pottery, and the objects of the Navaho Wolf, to further capture our imagination.
All the best.:=)