Wrapping up Paris in July 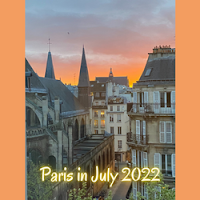 Oulipo and Georges Perec, Paris in World War II, Simone de Beauvoir, Paris mystery novels originally written in French, books by immigrants to Paris, The Anomaly, and Paris Metro Tales were all successful choices from my reading list for this month, and for my participation in the blog event Paris in July. I also added a couple of books that were not on the original list. I read a total of eleven books about Paris, and cooked one very French meal for friends.
I didn't complete my plan to explore the reason why the French love Boris Vian's L'Écume des jours and Le Grand Meaulnes by Alain-Fournier. Also, there were a couple of other books from my list that I missed. But I think I did a lot, and I feel as if I do in fact have some new insights into life in the Paris of real people, both now and in the past. It's been a great month!
I'm wrapping up my participation a bit early because I have some travel plans for the rest of the month.

Paris Topics from the Other Bloggers at Paris in July

I really enjoyed reading the blog posts of the other participants who reviewed many books and wrote about other Paris-related topics. Some of my favorites:

"Like dozens of other novels -- young woman decides to divorce her husband and move to Paris to find herself and take over the locksmith shop of her recently deceased uncle [or whatever business her relative left her]. Young woman meets interesting Parisian people, becomes enchanted with the city, deals with Parisian bureaucracy and then discovers a life-changing secret about her own past. Will she stay in Paris or return to California and her unfulfilled life? I think you know the answer."

"The Parisian Agency, or L'Agence as it is known in France, is a reality show which features high end property, predominantly in Paris, although they do occasionally venture further afield to the French countryside and other locations."

All of us who participated owe our gratitude to Deb for co-hosting and especially to Tamara for once again linking all the many posts from bloggers who obviously love Paris!
Blog post © 2022 by mae sander for maefood at blogspot dot com.
Posted by Mae Travels at 7:04 AM

Deb's photo of the Paris street art is cool. I am a follower of Jeanie at Marmelade Gypsy, I enjoy her book reviews and her blog. Wishing your safe travels. Take care, have a great day!

Great list of things for me to check out, thanks!

I loved all you posts about Paris. I read them all.
I'm surprised about the lack of mustard. We use Dijon mustard (not much because I am not a mustard lover but hubby is) but I have not noticed a shortage.
It was also interesting to read about Simenon and Maigret's supposed anti semitism. I read most of his books and I had not noticed it. We have a Jewish branch in our family and I think I would have picked it up. Books written so many years ago would not be politically correct anyway. I usually take that into my stride.
I loved your blog about Alice's travels and the burgers etc. It was humorous.
Your dining room table is beautiful! Well done your Len!
Happy T-Day,
Hugs,
Lisca

Sounds like it was a great month in Paris for you! Thanks for your neat summary and the shoutout to my blog

What a good wrap up. I have one PIJ post I'm prepping. After that last book, I stopped reading Paris and turned to New York!

Always nice to see and hear about Paris... i would love to spend more time in that city.. Happy T day to you! Hugs! deb

So interesting and what could be better than Paris in July 😊. Happy T Day wishes! Hugs Jo x

Thanks for the shoutout Mae! It has been a fun month!

Bring on next year's Paris in July!

My partner, in the last play i performed this year, can see this mural from his balcony

I enjoyed reading all your thoughtful and thorough posts this month. I especially admire how you note your sources of information. Your posts often take me down paths I might not expect to travel, and I like that.