A Novel of Paris in the 20th Century 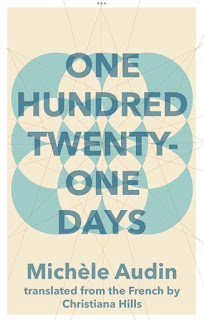 “As one of its characters rightly says, this book is a novel, a work of fiction. Its characters are imaginary. Any resemblance to real persons, living or dead, is purely coincidental or due to the permanence of human behavior. The names of some of these characters have been taken from (or inspired by) various books, including THE LILY OF THE VALLEY (Honoré de Balzac), A GALLERY PORTRAIT and W OR THE MEMORY OF CHILDHOOD (Georges Perec), THE COUNT OF MONTE CRISTO (Alexandre Dumas), and THE MASTER AND MARGARITA (Mikhail Bulgakov).”

As I read the book One Hundred Twenty-One Days by Michele Audin, I sometimes tried to look up the characters as if they were real. The style of the book made me think it was historical rather than a novel. The narrator, who identifies as a researcher, constantly explains where the quoted manuscripts and letters came from, and claims to have received permission to publish them — but after a while the reader is supposed to figure out that it’s all made up. As you see in this nearly-final paragraph, the book is very literary in its approach to the past.

The novel focuses on several intertwined  “lives,” especially of mathematicians and other academic figures, beginning in around 1900. The concern: what the twentieth century — especially the two World Wars — did to the characters in the novel, concentrating on lives led in Paris and the hardships and destruction, both physical and social, that befell them. One character had been a soldier in the trenches in World War I, and came out with a “broken face,” so that for the rest of  his life, he wore a mask to hide his deformity. Shortly after the war, another character went mad and shot his family, though he continued to do mathematical research for the rest of his life in an insane asylum. His psychiatrist was sent to Auschwitz, but died on the way home. There are many vignettes, presented in a variety of ways, supposedly from diaries and letters and other fictional first-person accounts of life at the time.

The reader must face the worst agony of the century as the characters experience the horrors of war, the mutilation of the soldiers in World War I, the persecution of Jews in World War II, deportation and the degradation of  concentration camps, the chilling decisions of collaborate with the occupiers of Paris, and — always — many of these characters’ efforts to pursue mathematical research under horrific conditions.

Here, to illustrate what I see as the nature of this novel,  is just one excerpt from the diary of a German occupier of Paris:

“May 31, 1942 Sunday morning. Thought of Otto Zach again. Where is he exactly, and in what condition? This is a time when many brave men will go through the gates of hell—and many will have seen it even before their own deaths. Walked across Paris to the Abwehr headquarters at the Hotel Lutetia, where Blank, one of my friends from Gymnasium, is assigned, and where they even work on Sundays. Had a drink with him. Then, on Boulevard Saint-Michel, I contemplated the fountain’s archangel while thinking of it as a symbol of our victory and the peace that will follow.”

The author’s own biography seems more than usually relevant to understanding the novel:

“MICHÈLE AUDIN is a mathematician and a professor at l’Institut de recherche mathématique avancée (IRMA) in Strasbourg, where she does research notably in the area of symplectic geometry. Audin is a member of the Oulipo, and is the author of many works of mathematics and the history of mathematics, She has also published a work of creative nonfiction on the disappearance of her father, Une vie brève (Gallimard, 2013)—Audin is the daughter of mathematician Maurice Audin, who died under torture in 1957 in Algeria, after having been arrested by parachutists of General Jacques Massu.” (Introduction to One Hundred Twenty-One Days)

It's very hard to write a conventional review of this novel and its protean excursions into many types of writing. The principles of Oulipo aren't enough to explain it. Oulipo is an abbreviation for the French "Ouvroir de littérature potentielle"  which means "workshop of potential literature." Founded in 1960, most of the writers and mathematicians who were its original members are no longer alive. However, the  group continues to bring in new members such as Audin, who was born in 1954. I find the experimental and unusual works of these writers to be fascinating, but I'm challenged when I try to explain it.

This post is being shared with the ongoing blog party called "Paris in July." I will return to the interesting yet challenging topic of Oulipo when I write about Georges Perec, one of the founding members, later this month.

If they've done their research, it can really illuminate the age!
(ツ) from Jenn Jilks , ON, Canada!

Sounds like a fascinating read! As I was reading your review, I was reminded of Norman Mailer's _Armies of the Night_. That books is quite different, but some of the writing technique sounds similar. I should reread that -- I remember being really impressed when I read it soon after it came out. Be interesting to see how well it holds up. Anyway, excellent review -- thanks.

I look forward to learning more about Oulipo from you.

I'd never heard of Oulipo before and look forward to hopefully learning more in the future. Nice you shared the meaning. I was drawn in when I read the word mathematician.

I have to admire you for reading this tough read. It sounds like an excellent book, with an important focus, but with all the terrible stresses of the last few years, I am not sure I am up to reading it.