Simone de Beauvoir and the Issue of Abortion 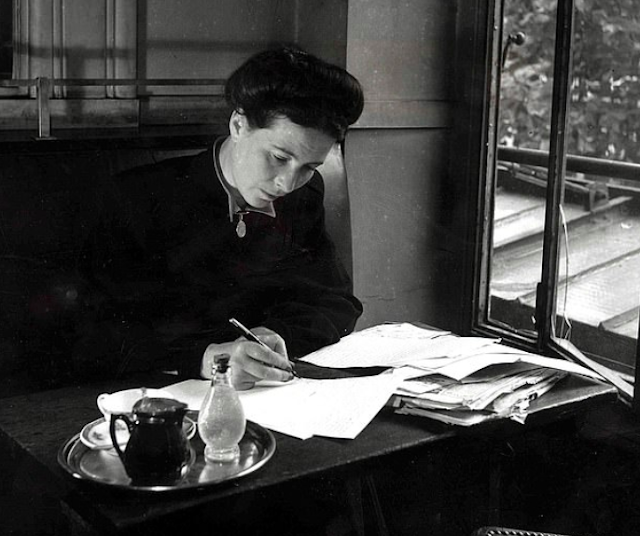 Simone de Beauvoir (1908-1986), famous as a novelist and a philosopher, was a leader in the mid-20th century struggle for women's rights. Her book The Second Sex "can be considered the single most influential work ever to come out of the existentialist movement." (Sarah Bakewell, At The Existentialist Café: Freedom, Being, and Apricot Cocktails, p. 210) According to the Guardian: "Her life has inspired generations of women seeking independence, and this was largely attributed to her unconventional relationship with the philosopher Jean-Paul Sartre, which seemed like a love that didn’t come at the cost of her freedom or professional success." (source)
The philosophical couple -- Sartre and de Beauvoir -- lived in hotels but not together, wrote much of their famous work in Paris cafés, and agreed on freedom from ordinary commitment to one another. Their life seems like a very romantic and ideal Paris existence, and is probably more familiar to most women today than the technical details of their philosophic publications or the feminist writings of de Beauvoir.
But there's much more to de Beauvoir's leadership of women in their struggle for autonomy and freedom. In particular, de Beauvoir wrote The Manifesto of 343 Women in 1971. The 343 signers, including the writer, all stated that they had had clandestine, illegal abortions. They asserted that they deserved complete control over their own bodies and over decisions on whether they should have children. Here are just a few words from the Manifesto:

A word which seems to express and define the feminist fight once and for all. To be a feminist is to fight for free abortion on demand.

It’s a women’s thing, like cooking, diapers, something dirty. The fight to obtain free abortion on demand feels somehow ridiculous or petty. It can’t shake the smell of hospitals or food, or of poo behind women’s backs. The complexity of the emotions linked to the fight for abortion precisely indicate our difficulty in being, the pain that we have in persuading ourselves that it is worth the trouble of fighting for ourselves. It goes without saying that we do not have the right to choose what we want to do with our bodies, as other human beings do. Our wombs, however, belong to us.

This is only an excerpt. For a long time, these words seemed to be just a historical detail -- nothing that concerns us any more. It's tragic that in America in 2022, this fight has to start all over again, with the coming of new laws prohibiting or regulating abortion, thanks to the reactionary Supreme Court. The Manifesto was particularly specific about regulations of abortion, as opposed to no restrictions.
From the Manifesto:

The most liberal of laws would still be regulating how our bodies can be used. And how our bodies should be used is not something which should be regulated. We do not want tolerance, scraps of what other humans are born with: the freedom to use their bodies as they wish. … we are opposed to all laws which claim to regulate any aspect of our bodies. We do not want a better law, we want it to be removed, pure and simple.

Between 1975, when the French law was changed, and February of 2022, abortion was legal in France until the 12th week of pregnancy, and covered under French national medical insurance. A revision this year extended the time frame until the 14th week, and also made medication abortions available via remote appointments rather than in person. Thus de Beauvoir's demand for no regulation has never been achieved in France. (This is a bit complicated -- see "France Expands Abortion Access in Two Key Moves" from Human Rights Watch for details.)

The words of de Beauvoir's Manifesto have just become more relevant in the USA than they have been for half a century.  Suddenly, moral questions also are being asked in what I see is a new way. In the current New Yorker, an article titled "Ethical Health Care After Roe: Can physicians meet their obligations to patients when abortion is criminalized?" reports on an interview with Louise Perkins King, a surgeon and bioethicist at Harvard, and the vice-chair of the ethics committee at the American College of Obstetricians and Gynecologists. This interview covers many of the issues of women's autonomy over their own bodies, returning to the issues that concerned de Beauvoir. The article documents some interesting conclusions about the Supreme Court decision, particularly: "we know from very clear statistics that many people will die because of this decision."

I especially found the following statement by King to be enlightening in regard setting arbitrary time limits for the legality or illegality of abortion, an issue also of importance to the Manifesto. King stated:

..if I’m pregnant, at a certain point in time, depending on which legislation you’re looking at, you will be able to say to me, “You no longer have the right to manage the risks for your body, to manage the risks of passing a grown infant through the vaginal canal, the risks of tearing, prolapse, sexual dysfunction, hemorrhage, and death. You no longer get to control whether you’re going to take those risks or not.”

Obviously, if I’m sitting in front of somebody who is in the very early stages of pregnancy, this question is very simple for me. In the early stages of a pregnancy, if they don’t wish to take on those risks, a hundred per cent, they have an absolute right to bodily autonomy in those decisions. If we’re getting into later stages of pregnancy, it becomes quite complex, but really that’s almost a red herring, because it just doesn’t happen. Even with the incredible lack of access that we have in this country to sexual education and contraception, women are not presenting for elective termination in their third trimester. So that question doesn’t happen, and, because it doesn’t, as an ethicist, even though I find a lot of difficulty in that space, in my analysis, I don’t actually have to answer that question. It becomes a red herring, because it constantly does get brought up, even though it’s not really the true issue. It’s an interesting, difficult question to grapple with, but it just doesn’t happen.

When I think about de Beauvoir and her leadership of the struggle for women's rights, I think of Paris in an idealized time in the 1930s and 1950s. Or of Sartre and de Beauvoir's war experiences under the Nazi occupation of Paris. But now I also think about the way the advances in women's rights, that were associated with de Beauvoir's many works and actions, are once again being denied. I'm so sad! And angry!

Blog post © 2022 mae sander. Quotes as attributed.
Shared with Paris in July.
Posted by Mae Travels at 9:32 AM

I read her when I was in my late teens and it had a profound impact on my beliefs.

She is an interesting woman!

Hello,
I wonder what Simone de Beauvoir would thinks of Women's rights happening now in 2020. Everyone has a right to their freedoms, it is no one's business what someone else does with their body. Take care, enjoy your day and happy new week ahead.

Sounds like a really interesting and timely book. I wonder what she would think of what's happening in today's world.

How fascinating - de Beauvoir's comments and observations on abortion, and the French rules about it.

I'm Pro Choice, so this decision in America angers me as well. Interestingly, a friend of mine who is Pro Life believes it is wrong as well to force the morals people haven't chosen for themselves onto them.

I am sad and angry as well. And this is a most interesting post and a part of de Beauvoir with which I'm not familiar -- but it doesn't surprise me.

Thank you for this post. It remember me to this interesting woman. It's a difficult discussion, of course. But why, the politician decide about the life of an adult.

The fight has been long and lasting.

This was very interesting. I am not really familiar with her work, but I enjoyed reading more about her. I enjoyed reading about her idea of when termination should occur and agree completely. However, if the person decides in the ninth month to get an abortion for reasons other than health, I would ask why it took her so long to decide. That is my only concern. Other than that, I am in complete agreement with de Beauvoir. I am also angry and FRUSTRATED that we have been pushed back into the dark ages where many of our rights are being challenged by 6 people nobody voted for.

It's shocking that we still need to have these conversations.

Me too Mae. Sad angry and frightened for the future of our country. I knew I would have missed a thoughtful post from you on this issue (while I was away from blogland) -- thank you for this.

I can't think of any issue that has been used to divide people more than this one in America today. Nothing has been used more to demonize a large segment of the population as either "baby killers" or "people who want to put women back into lives of servitude." It's an issue I have never heard discussed thoughtfully and civilly by people with opposing opinions.