Paris and Ann Arbor in July 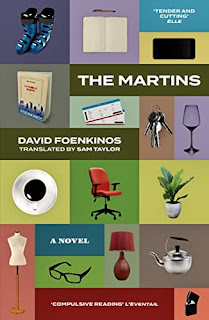 Today, July 22, 2022 is the publication date for the paperback English edition of The Martins (La famille Martin) by David Foenkinos. It’s also the second day of the huge Ann Arbor Art Fair that extends, they say, for 30 city blocks and offers 1000 booths to 500,000 visitors. In this post I’m arbitrarily combining my experiences with both of these great things — art and literature, you know.
The Martins was published in France in October, 2020, and published here as a Kindle edition in June, 2022.  I read it this week. It's a nice little book about an author (the story’s unnamed narrator) who decides to write a novel about the next person he sees on the street near his apartment. He randomly chooses Madeleine, a woman around 80 years old; in his interview process to create characters from "real" people, he also gets to know her daughter Valerie Martin, Valerie's husband Patrick Martin, and their two adolescent children.
Within a day, the narrator/author is brought into the lives of the five people in the family. Each one asks him to help with some central problem in their life, and he soon takes responsibility for deeply personal problems, or at least tries to help out with tricky situations. In particular, Madeleine confides in him about a passionate affair that she had in her early twenties, ages before she met her husband (Valerie’s father). He had abruptly left her and moved to California.
The narrator, helpfully, finds the lost lover on Facebook, contacts him and within days accompanies Madeleine to LA to meet him once more after some 60 years. Meanwhile, the narrator is also involved to some extent in straightening out problems of the others, or at least attempting to do so. In the process, he finds plenty of material for the novel he was writing in his unusual information-seeking exercise. It’s a sweet little story — all happy but not fake happy like a lot of ordinary novels. I found it strangely plausible and not phony!
I read The Martins as part of my July reading project, looking for books about Paris by French people, seeking a French point of view about life in Paris. One of the other bloggers participating in Paris in July is Emma who blogs at Words and Peace. She reviewed this book yesterday, and she called the book "a great social window on French society: from Patrick and his crazy boss, to the two teenagers of the family, with a picture perfect of young people and their trauma at that difficult age." Just what I was seeking, though I had almost finished the book when I read her review.
Now for more photos of the Ann Arbor Art Fair. We found that the art works this year weren’t nearly as tempting as they have been in the past. We did not buy from any of the artists. In fact, I didn’t even find much art to take photos of — I concentrated on hats! Here goes: 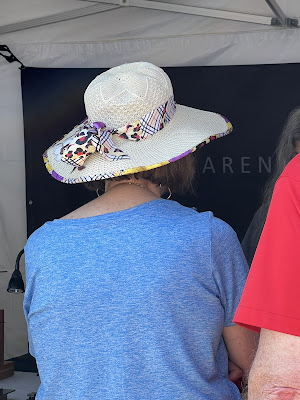 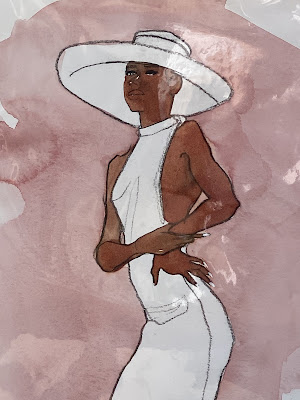 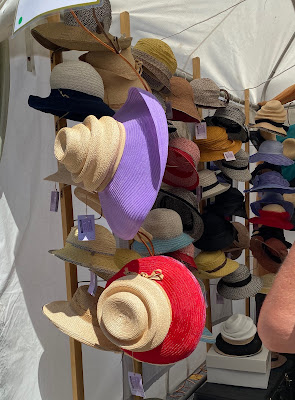 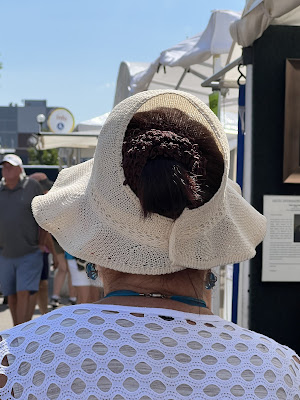 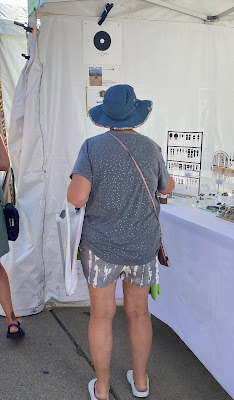 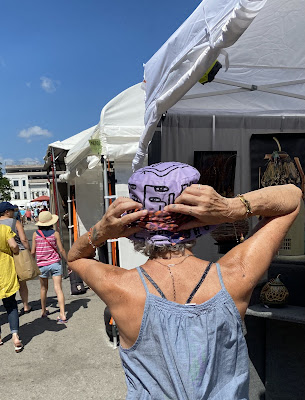 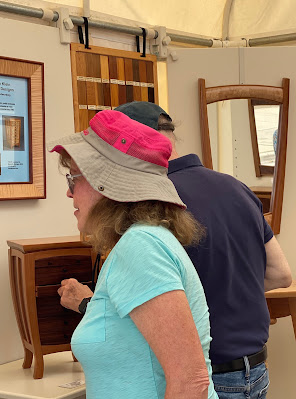 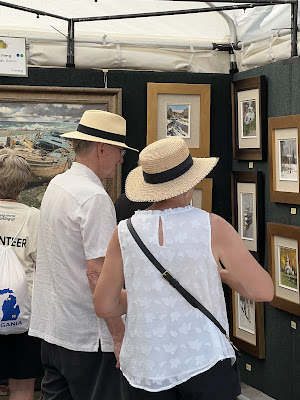 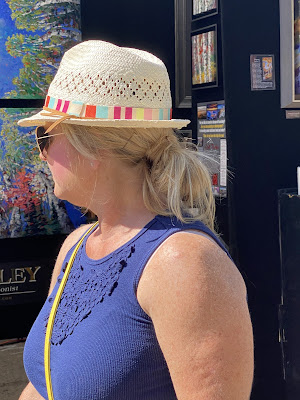 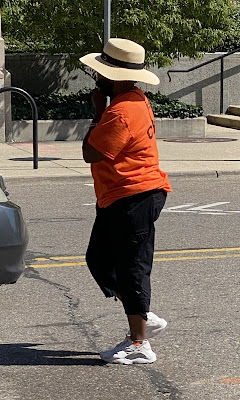 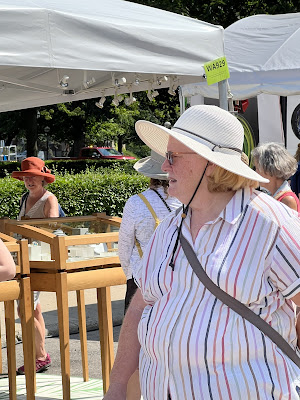 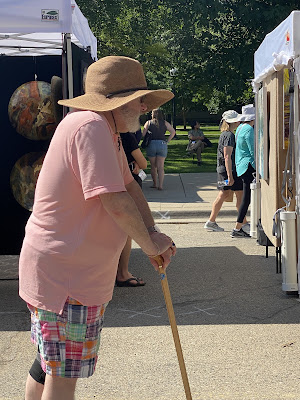 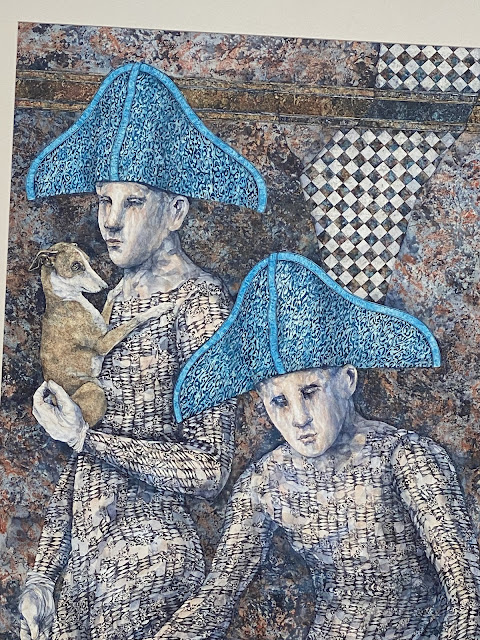 I enjoyed seeing all the hat photos, such a variety!
Take care, have a happy day and a great weekend!

Summer hats are most fashionable and useful too. You caught a great collection of them Mae. Have a wonderful weekend.

Hats! I'm a fan, and I usually wear a hat when I'm out anywhere. I love your photos, especially the one of the couple with the matching hats. I'd be sorely tempted by the hats on display for sale :)

I think The Martins is a delightful read, and I'm glad you enjoyed it, too.

And look at all those hats. Hats need to make a comeback, especially during this abominably hot weather.

I always wear a hat with this brutal Florida sun. Very enjoyable to see other hat wearers. That book sounds very good so I will add to my Goodreads list.

You had a lot of fun with the hats, Mae. Thanks for sharing with us.

Wonderful hats! I find that Art Fairs draw the most intriguing kinds of people. I love looking at them as much as the art, sometimes. I will link you post to mine in The Martins, a books so many of us seem to have enjoyed especially for Paris in July 2022.

What a novel concept for writing a book. It was a nice review. Sorry theArt Fair wasn't all that interesting. Sadly, I've been to many of these art fairs and after awhile, they all start looking the same to me. Only once in awhile do I see something that is different from the norm. I think checking out the hats was a clever way to enjoy the fair,

Ohhh I love all the hat people. I am a hat person myself. Have a great day.

The book sounds interesting. Thanks for sharing your thoughts about it.

Hats. The "drama" of my life.
Ingo latest presented me with a beautiful one.
Post to come sometime.
Sad the fair was such a disappointment.

You managed to get a wide variety of types of hats in your photos! Funny how times have changed. When I was growing up women had a selection of hats in their wardrobe. Now I only own a beach hat and baseball caps for walking.

I like the sound of The Martins. Sounds like a unique story line. The hats were a great thing to focus on at the art fair! I enjoyed seeing them all. Have a good weekend!

Very cute hats, all! I remember going to the art fair once on one of the hottest days of that particular summer and nearly croaked! Can't imagine it this week -- well done!

I'm quite intrigued by The Martins -- what a great premise for a novel.

I saw The Martins blogged about on Dolce Belleza as well today; this book seems like one I'd enjoy. l like all the different pictures you captured of everyday people in hats.

Hats, hats, and more hats! Have a good weekend!

Sorry to miss the Ann Arbor art fair this year. We've gone to several over the years, but the heat and other considerations stood in the way this time. I would have been sure to wear my hat too!

My first trip to Italy I didn't have a hat and needed one so bad. I was miserable in the sun even with sunglasses. Never again. I wear funky hats all the time. The funniest one is the woman whose husbands hat makes here look like an extra doohickey on the top of her hat. Ha!

So glad you enjoyed The Martins, thanks for quoting my review.
Cute hats!!

Love the photos of the hats! I'm not much of a hat wearer but I do have a few in case I'm going to be out for hours in the Florida sun and heat.

I hope you have a great week!