A Viking Hearth in Iceland, Greenland, and Vineland 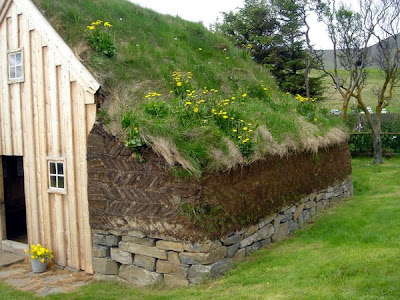 Women in Viking sagas played a key role in the economic life of their time. "There were certain things no self-respecting Viking man would do, such as weaving or sewing. No man would milk a ewe or make cheese. No Viking would cook, unless aboard ship, and even then it was considered demeaning. ... The wife ... hired and fired servants and was in charge of the food -- preserving it, preparing it, and sharing it out. In those years when winter lingered and supplies dwindled, the wife decided who starved." Viking women had more freedom and power than they had later, when Christianity dictated new ways. Women created much of the wealth: the cloth they spun was a key trade product for the Icelanders and Greenlanders, who needed iron and other goods to survive in the harsh climate. Three women could milk 12 cows and 80 ewes, and then make butter, cheese, fermented milk, and whey to feed the family and store for winter.

At the time of the sagas, one woman named Gudrid the Far Traveler lived in a series of sod houses held up by timber from her Scandinavian homeland -- a modern reconstruction appears at right/above. She and the women in her household cooked over scarce charcoal or sheep dung on a hearth insulated in some cases from the permafrost beneath her floor, and cared for cows and sheep held in similarly constructed barns. On small and vulnerable Viking ships, she sailed to each new home -- at times, she owned ships, land, houses and goods.

The major events of Viking settlement took place in her lifetime about 1000 years ago. Gudrid lived for a while in every settlement. Her long North Atlantic voyages took from Europe to Iceland, Greenland, and Vineland, the latter being the somewhat mysterious temporary Viking settlement in Nova Scotia. Further, at the end of her life, having became a Christian nun, she made a pilgrimage to Rome. Earlier, she had probably worshiped the old gods.

Gudrid's life is the subject of The Far Traveler: Voyages of a Viking Woman by Nancy Marie Brown: a wonderful tale based on Icelandic sagas, historic documents from other European countries, and on archaeology. The author's own experiences on a dig in Iceland in 2005 and her travels to Gudrid's various homes are spun throughout the book. A web page of her travels illustrates these experiences -- including the photo above. (Initial quote & info, page 69 & 146)

Viking longhouses like Gudrid's consisted of a single rectangular room. The cooking took place there at a longfire: "a narrow hearth running longways down the center. Earthen sleeping benches flanked the fire.... Longhouses are generally about 65 feet long and 20 feet wide." Quite a few household members lived and slept in these houses. A smaller house called a pit house was often built nearby -- they may have served as temporary quarters during construction of the more spacious longhouses, and then become the women's weaving rooms. The hearth could be the scene of a variety of social interaction: "One feud.... started when Thorleif Kimbi grabbed cooking pot away from another Viking, spilling the man's evening porridge, and was whacked with the hot ladle on his neck." (page 129-130; 165)

Gudrid's material goods must have included shears, knives, iron cooking spits, a cauldron with a tripod, and frying pans for the hearth; a kneading trough; milking buckets and cheese-making buckets; spindles and looms; dippers, dishes, spoons of wood or horn; copper scales (because well-off women traded the cloth they spun and wove for coins that must be weighed); and personal goods such as a comb, brooches, and perhaps a bronze bell. Despite her wealth, Gudrid would have milked ewes and cows, and worked making cheese, spinning wool, dyeing the yarn, and weaving a variety of types of cloth for her family and for sale. "While milk was the foundation of the Viking diet, homespun was the culture's chief export." (pages 42, 69, & 92)

The hearth's importance was a key to understanding Viking ways. I like to focus on kitchens and the activity within them, when I learn about a new culture or when I visit friends or restaurants. Obviously, there was no separate kitchen in this remote time -- the hearth is it.

Household goods had to be portable on the Vikings' ships which often took them to new homesteads. Folding beds, buckets for milking and making cheese, iron tools, and even the timbers of the house itself would be packed into small bundles. Chests with padlocks were probably part of her possessions. Grave goods from a variety of digs include examples of all of this and even a bundle of spices, in one instance, including "cumin, horseradish, and mustard seed... [and] cannabis -- hemp seed grown for rope." (p. 92)

While women tended the hearth and the dairy, men gathered gulls eggs and driftwood; hunted swans, seals, and other game; fished in the rich rivers where salmon ran. They tended the sheep in pastures near the house or took them to remoter pastures in the few summer months. In some settlements, they could grow hay, barley, or other crops. Cows and pigs had to be kept in barns during tough Iceland and Greenland winters. Few trees grow in Iceland, virtually none in Greenland, where driftwood was a key source of wood for charcoal and for small wooden objects. Making sure that the household had enough food for winter occupied both men and women. The men also went on walrus hunts, to obtain walrus ivory, the other major trade good.

Rarely Gudrid and her household may have had enough food for a feast: "A feast that included codfish, eggs, milk and cheese, lamb, and beer was a clear declaration that 'this farm stands on many feet.'" (page 108-111)
Posted by Mae Travels at 10:35 AM

Labels: Food in Literature, Kitchens, Posted in 2008, What did historic figures eat

I always learn something new here. Thanks!