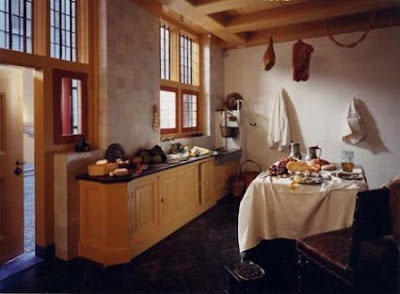 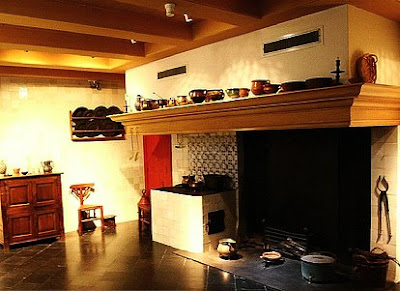 On a visit to Amsterdam some years ago, we visited Rembrandt's house. Because Rembrandt once went bankrupt -- he was a much better painter than businessman -- the museum creators were able to reproduce his material surroundings quite effectively based on the records of his possessions made by the court. He also painted images of the material world so effectively that his works allow recreation of his daily life.

From a website about the Rembrandt house, the photos show the reconstruction of his kitchen. We can see that this kitchen is relatively modest, and in the context of the house, would not have produced lavish feasts, but rather, ordinary daily meals.

Rembrandt, who lived from 1606-1669 offers a somewhat different face of the Dutch Golden Age than did the other painters I've been thinking about. His portraits of individuals, couples, groups, and of himself seem to probe an inner person, while so many of his contemporaries used surface details to express their ideas. 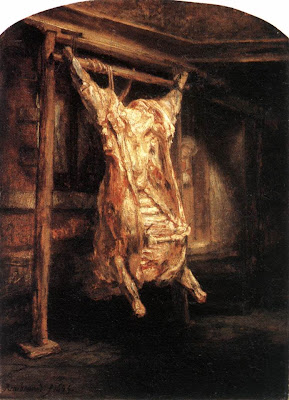 A trip to the Louvre is overwhelming, but if you've made it to the rooms displaying paintings of the Dutch Golden Age, you have surely been impressed by Rembrandt's painting of an ox hanging in a butcher shop. Yes, it represents food, but it also suggests his quest for visual understanding of flesh.

Rembrandt and his contemporaries all created dramatic depictions of Biblical, Classical, and historical scenes. Using dramatic effects of light Rembrandt illuminated the most dramatic moments of a well-known scenario.

The painting of "Balshazzar's Feast" in the National Gallery in London is one of his most famous. The mysterious hand is writing on the wall, "MENE MENE TEKEL UPHARSIN" in Hebrew letters (which Rembrandt probably learned from his many Jewish neighbors, but that's a long story for another time).

Simon Schama says that other painters had other interpretations of Belshazzar's feast and the moment of revelation:

But it was ... Rembrandt who chose the narrative climax for his great history painting, when the king sees the spectral hand inscribing its cryptic message of doom. These moments of nemesis -- invariably decoded by venerable and untainted prophets (like Daniel) -- were favorite themes of history painters. ... For Israelites, Babylonians and New Hebrews [i.e. the Dutch] alike the moral was clear. Instead of gluttonous feasting and wanton behavior, fasts of solemn penitence should be decreed. (Schama, p. 150) 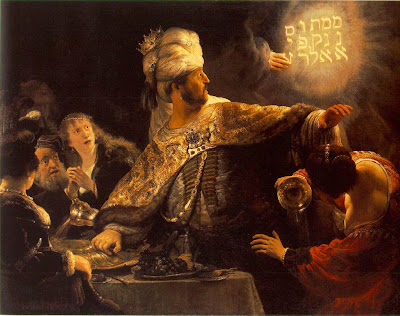 Belshazzar, according to the book of Daniel, was using the vessels that he had taken from the Temple in Jerusalem by Nebuchadnezzar, "for the profane purposes of his feast." (Schama, p. 149)

The lavish food on the table, along with all the other details, add to the drama of the moment. Feasts, Schama explains at length, were "deeply embedded in ancient Netherlandish usage," and the Dutch did not want to fear that they were indulging in a dangerous passtime such as that depicted. This dual commitment to both piety and luxury was an important characteristic of Dutch attitudes.
Posted by Mae Travels at 1:25 PM

Labels: Art and Artists, Kitchens, Posted in 2008, What did historic figures eat

Wow -- Rembrandt had a great kitchen!

I really love this series, Mae. I love this era and your take on it is fascinating.

I'm writing a historical tour about the Jewish quarter of Amsterdam (crimsonbamboo.com) and I'd like to use some of your photos, if that's all right with you. All credit would be yours, and the images would be linked to your blog.

Let me know; you can email me at julynn93 at gmail dot com.

To Jules: The photos came from a website that's linked in this blog post. So would better link to the source, not to my replay of them.