Modern Japanese home and apartment kitchens, as far as I know, differ little from similar-sized American or European kitchens. Space is at a premium, but modern appliances are made to accommodate the needs. A rice cooker is essential, while sometimes the space is simply too small for the kitchen to include an oven. From the book Japanese Style: "the cluttered kitchen" close to the seating area of "Tower House" which stands on a 200-square-foot lot in Tokyo. 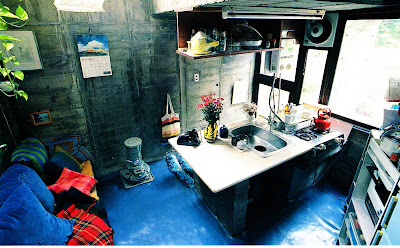 Books and articles about high-tech design often show the largest and most lavish styles, in kitchens of very rich (and sometimes famous) chefs or celebrities. The following images appeared in Four Japanese Kitchens, a photo essay in the New York Times. They represent a totally modern, all steel kitchen and one that somewhat blends modern and traditional ideas. 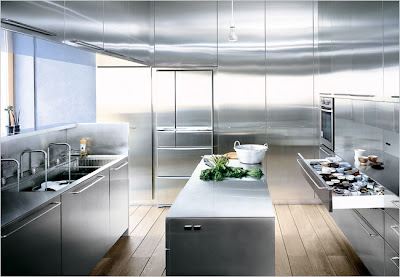 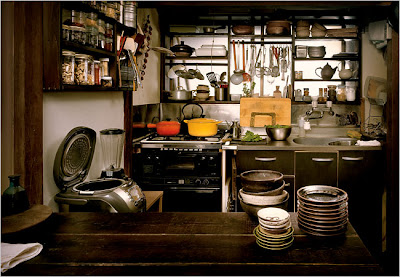 The modern industrial kitchen deserves some attention. In another image from Day in the Life, we see the sterile preparation of bento box lunches in a large work space. 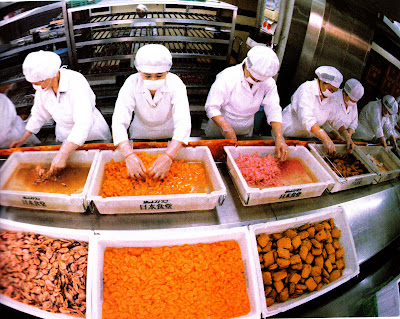 Everyone has seen the kitchen area at a sushi bar, since the food is prepared in plain sight. In fact, witnessing food preparation might really be a Japanese thing. For example, the food prep area of those performance cooking Japanese steak houses -- I don't know if they have them in Japan, but they're very popular here. Do these qualify as a kitchen? The chefs play with food, toss eggs in the air, flip shrimp, and above all, make big fires: 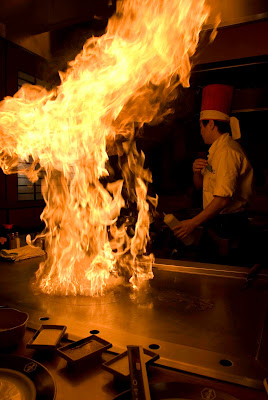 I do love the Japanese aesthetic, and the kitchens show that same sensibility that I love in all Japanese home design.