An Invention from the Dutch Golden Age

Last week I was writing about food in the Dutch Golden Age, the 17th century. Today's New York Times food section has an interesting related article. It describes genever, a predecessor of modern gin, which originated in Amsterdam at this time. In particular, the Lucas Bols company began production in 1664.

Author Florence Fabricant writes about the past and the present of genever:

Gin was born as genever in Holland in the 17th century. It was renamed gin when it got to England about 100 years later. Eventually, the English style, which is stronger and lacks the touch of sweetness that is typical of genever, came to dominate the market. But genever is making a comeback. 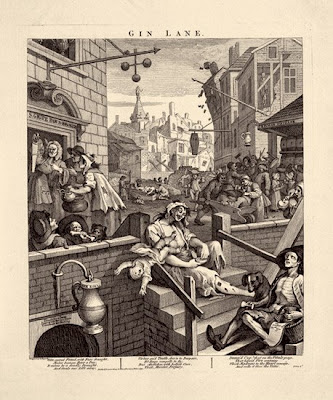 Distilled spirits were a mixed benefit to society of that time. They did seem to lead to over-use and alcoholism, at least later in England. At left is William Hogarth's well-known "Gin Lane" which shows the effects of English gin in the following century.

The article is: Malty and Complex, the Original Gin Is Making a Comeback
Posted by Mae Travels at 8:11 AM