The Kitchen of Henry VIII at Hampton Court Palace 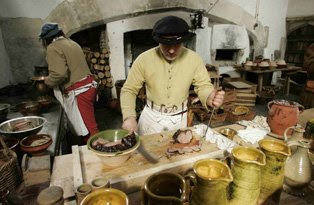 The L.A.Times today noted that 2009 will mark the 500th anniversary of Henry VIII on the English throne -- he was crowned as king when he turned 18. The article noted:

A major presentation at Hampton Court, Henry's magnificent palace on the Thames, opens April 12 and runs daily through the year. It focuses on one day in the king's life: July 12, 1543, the day he married his sixth queen, Catherine Parr.

Famous for his leadership, his many wives, and his split with the Catholic church in Rome, Henry VIII is also legendary for his giant size and appetite. So it's no wonder that Hampton Court Palace features, among its many wonders, a major exhibit about cooking and kitchens of Henry's era. Says the Palace website: "The Tudor kitchens at Hampton Court Palace are a living monument to 230 years of royal cooking and entertainment." The photo from that website indicates how interesting a visit must be.

In Henry's day, the kitchens prepared two meals per day for 600 to 1200 people ranging from the lowest servants to members of the royal family. Today these kitchens continue to be used for period cooking and baking.

It's been many years since I visited Hampton Court Palace, and I don't know if the kitchen exhibit had been created at that time (or if I visited it). I mainly recall the outside with its famous brick exterior, and the fact that England was having a terrible drought that year, so many of the gardens were going without water.

You can see that I'm resuming my occasional feature about kitchens of all sorts, from those of my friends to famous and historic kitchens.
Posted by Mae Travels at 7:53 PM

I love these kitchen photos, especially the historic ones. Keep 'em coming!