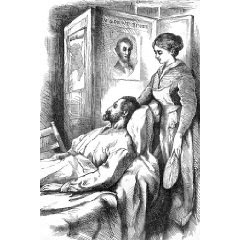 In war time, provisions and hospitals are a major element of strategy. Louisa May Alcott became a nurse in the Civil War when she was thirty years old, the minimum age accepted for women in war work. She worked in a hospital in Washington, D.C., which was quite near the battle front.

Alcott's description of the staff meals served in the hospital is very interesting:

"The three meals were 'pretty much of a muchness,' and consisted of beef, evidently put down for the men of '76; pork, just in from the street; army bread composed of sawdust and saleratus [baking powder]; butter, salt as if churned by Lot's wife; stewed blackberries so much like preserved cockroaches, that only those devoid of imagination could partake thereof with relish; coffee, mild and muddy; tea, three dried huckleberry leaves to a quart of water -- flavored with lime -- also animated and unconscious of any approach to clearness. Variety being the spice of life, a small pinch of the article would have been appreciated by the hungry, hard-working sisterhood, one of whom, though accustomed to plain fare, soon found herself reduced to bread and water; having an inborn repugnance to the fat of the land, and the salt of the earth."

Alcott continues by describing how extremely quickly the hospital meals were devoured: "some twenty hungry souls rushed to the dining-room, swept over the table like a swarm of locusts, and left no fragment for any tardy creature who arrived fifteen minutes late." (p. 86, Louisa May Alcott's Civil War, Edinborough Press, 2007; illustration p. 79 is from the 1881 edition, illustrator not identified.)

Before writing Little Women, Alcott was an industrious but not very well-paid author. (Little Women became an instant best-seller that made her rich and famous.) She created an earlier alter ego, Nurse Periwinkle, for a series of sketches and stories based on her own nursing experiences; the quotations are from these sketches, first published in 1863 as the war continued.

Most of the book describes the enormous task of nursing that Alcott faced. The casualty rate among Union soldiers was enormous, and the effort of caring for the wounded was unimaginable. Large numbers of patients, filthy and in terrible pain, were brought into the hospital; many had lost limbs or received clearly fatal injuries. Surgeons treated those that they could; Alcott's job was to wash them, help them eat or drink, write letters to their loved ones, and very often to ease their final hours by any means she could devise.

Fatigue and an infectious illness cut Alcott's service as a nurse to only around a month; she became so ill that her superiors contacted her family in Concord. Her father came and took her home to recover. Devotees of Little Women will recognize the event, which was essentially reversed in the novel. Jo March, Alcott's surrogate, and her sisters stayed at home. The fictitious father, Mr. March, went to Washington and became too ill to continue his service, and Marmee, the girls' mother, traveled to bring him back.

As a child, I read Little Women many times, but I'm just reading the Civil War stories for the first time. I feel as if I recognize the voice in the stories; something about Alcott's approach seems constant in these grim tales meant for rugged adults, not for the young girls who later became her best and most permanent audience. I also recently learned much more about Alcott from the book Eden's Outcasts: The Story of Louisa May Alcott and her Father by John Matteson (Norton, 2007).
Posted by Mae Travels at 1:09 PM