Food for both rich and poor

In the book A Worldly Art: The Dutch Republic 1585-1718, author Mariet Westermann discusses themes in art work of the Dutch Golden Age, including several food-related themes. During the sixteenth century, many new products came to the Dutch markets, thanks to Dutch commercial voyaging throughout the New World and the Old. In Gabriel Metsu's painting "Vegetable Market in Amsterdam," painted in around 1661, some of the new and expensive vegetables are on display:

Westermann writes: "Metsu gave pride of place to the Horn carrot (the orange root in the cane basket) and the cauliflower, both of them expensive vegetables that Dutch growers had recently developed; they are contrasted with turnips and other humble staples of Dutch cooking."

The painting as a whole shows the environment of this market, and "also celebrates Amsterdam architecture, recently transformed by a building campaign to serve the ever-increasing demand for homes and warehouses." (pages 109-110) 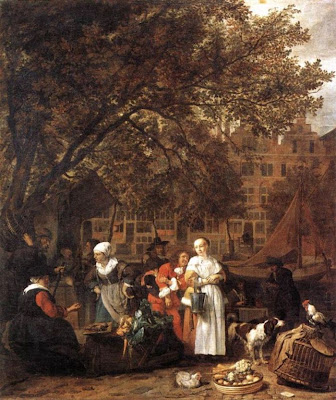 Adriaen van Ostade's etching "Prayer before the Meal" (1653) illustrates a humble family at their hearth, ready to eat a simple meal. The contrast to the rich foods in the other paintings I've shown is obvious. Westermann particularly contrasts the theme of the family's gratitude and piety to the chaotic and irreverent attitudes shown in by other artists, especially by Jan Steen. (p. 123) 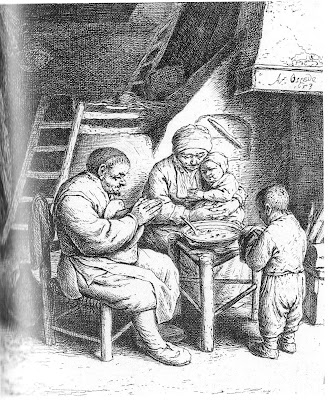 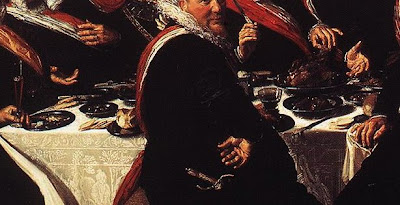 Portraits in the Golden Age often used food to demonstrate the lavish lifestyle of the subjects of the painting. In the "Banquet of the Officers of the St. George Militia," painted in 1616, Frans Hals showed about 12 opulently dressed members of the militia and the food they were eating at their banquet: meat, olives, wine, bread. The damask tablecloth remains even today a signal of luxurious dining. The officer carving the meat also suggests luxury. (pages 145 & 180)

I've cut out everything except the food and part of the tablecloth to emphasize the contrast with the poor family's meal in the previous example.
Posted by Mae Travels at 4:03 PM

And it hasn't really changed so very much, has it? We celebrate gourmet restaurants, and we have children in this land of plenty who go hungry every night.

A big difference is that it certainly isn't our militia members (military families) who are enjoying an opulent lifestyle.

You mught be interested in the Carrots in Fine Arts at the World Carrot Museum - www.carrotmuseum.com