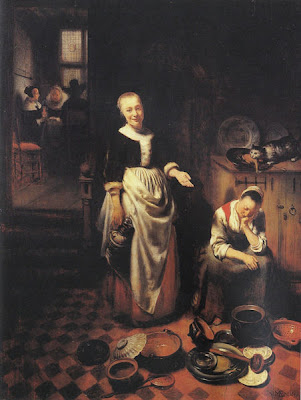 Nicholas Maes painted a servant girl sleeping in a kitchen, neglecting her work. The painting seems to turn many things around from the usual way Dutch painters saw them. Very often, the kitchen is viewed through a door, off to the side, from a more important room in the house: here, the house shows through a door. The kitchen is foreground, not background, and the mistress of the house seems to be the one who is observing -- not as often happens, the servant. Neglect and duty were frequent themes of the paintings of the era, obviously front and center here.

In pursuit of a better understanding of the Dutch Golden Age, I have been reading The Embarrassment of Riches: An Interpretation of Dutch Culture in the Golden Age by Simon Schama. Chapter 3, "Feasting, Fasting, and Timely Atonement" could stand alone as a book on food and culture in this amazing era. I feel as though I learned a great deal about the meaning of food, kitchens, and people as they appear in the paintings of the era. Having read it makes me feel much more prepared to appreciate works such as the sleeping servant above.

Painter Nicholas Maes was especially known for his scenes from daily life. The painting below has a simpler theme: an attractive woman at work, peeling parsnips as a chubby-cheeked child looks on. "The preparation of food -- peeling of vegetables like Maes's parsnips -- could supply ... instruction in household virtue," Schama says (p. 559). A focus on children is the theme of another chapter of Schama's book -- the Dutch were very advanced in many aspects of their attitude toward children. Here, the kitchen activity is enhanced because of the child's participation in the scene. 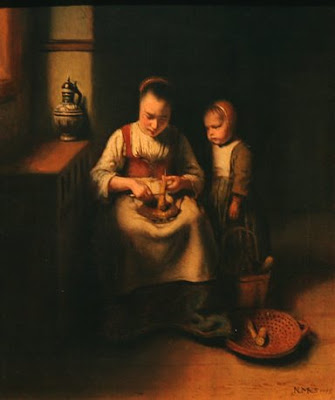 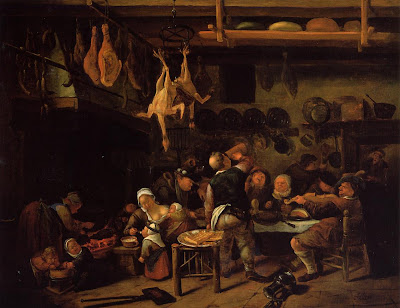 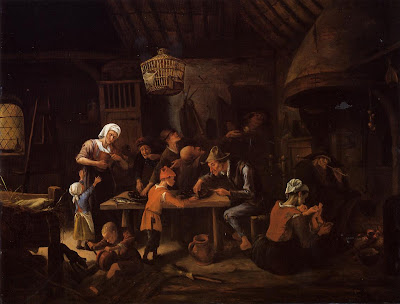 Some people were definitely richer than others in the Dutch Republic, but what's remarkable is that working people, doing even menial jobs, had a decent life and were far from starvation. The gap between rich and poor was large, but nothing like the gaps between grinding poverty and aristocracy in other European countries at the time.

The prayers of working people before they ate their simple meals were a frequent subject for artistic works (as I illustrated in my earlier post). Steen treated this theme several times: 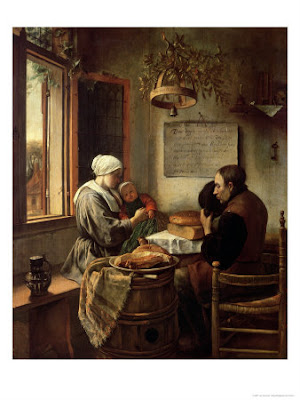 Holiday feasts, as well as the feasts of guilds and associations, were an important element of life in the Dutch Republic, and they served a variety of social and cultural purposes. As depicted by portrait artists, these feasts also help us to envision how people enjoyed life. Steen's painting of the St.Nicholas feast is a good example: 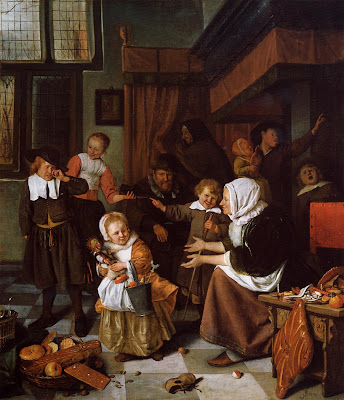 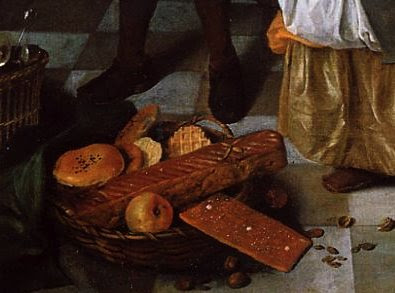 The basket of treats in this detail from the picture especially helps to imagine how delicious the food must have been for people of many social levels in that era.
Posted by Mae Travels at 1:44 PM

This is fascinating stuff, Mae. Another book for my list.