Kitchens in the Dutch Golden Age 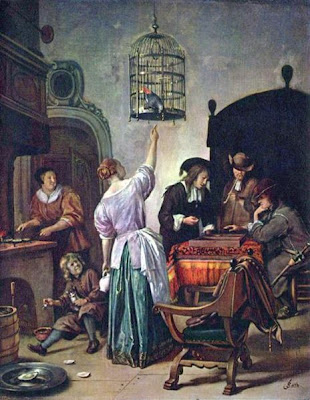 Jan Steen's painting "The Parrot Cage" includes many of his playful references to contemporary folk wisdom -- he often showed what he thought of his lazy or slovenly subjects by symbolic images worked into the scenes he painted. I won't try to point these out, only to note that this scene seems to be set in a kitchen, with the stove off to the left.

The Dutch Golden Age lasted from around 1580 until around 1700. During this era, many famous painters produced works of amazing genius. Rembrandt, Vermeer, Steen, Metsu, Terborch, and many others particularly loved to paint the beautiful interiors of the homes of the rising middle class Dutch people. Scenes of kitchens, food, and food preparation appeared so much that I can't do justice to this era with a single short write-up. I have chosen just a few examples. 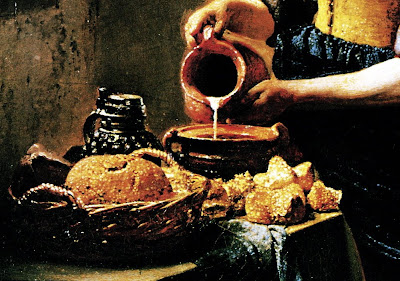 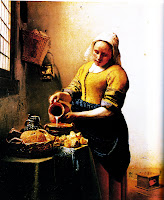 Vermeer's painting "The Milkmaid" shows a woman at a table, probably in the kitchen where she works, pouring milk from a pitcher. Golden loaves of bread covered with sesame seeds appear to be ready to serve to someone, presumably her employers. Another, more elaborate ewer stands on the table behind the bread basket.

The simplicity of this painting contrasts to the multi-level symbolism of Steen's paintings. Scholars seem to think it is exactly what it looks like: a servant girl preparing food. The light from the window illuminates this simple scene, painted in around 1660. Vermeer's incredible talent has inspired writers, film-makers, and painters from that time onward. In the 19th century, this painting received quite a lot of attention, evidently. 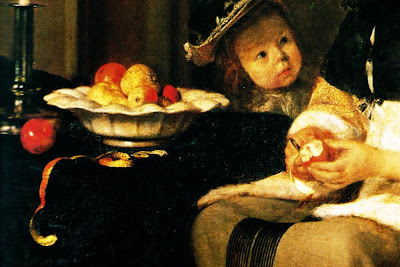 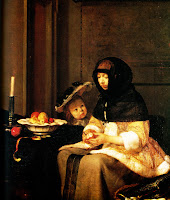 Terborsh's "Woman Peeling an Apple" was painted very shortly after Vermeer's "Milk Maid," in around 1661. These painters knew one another's work, and influenced one another, so it's not surprising that the theme of food preparation appears in both. The bowl of fruit on the table, including the dangling apple peel, is very similar to many of the still-life paintings of the era.

The painters in this Golden Age documented everyday life with beautiful insight. Paintings included the many new fruits and vegetables that appeared in the markets and people preparing and eating all sorts of produce, meat, fish, and baked goods. I'll return to this rich and wonderful era of kitchen images.
Posted by Mae Travels at 12:35 PM

Another fun post! Notice that everyone working in the kitchen is female...

I absolutely adore Vermeer and most of the Flemish painters from this period.

I'm so glad you included this!