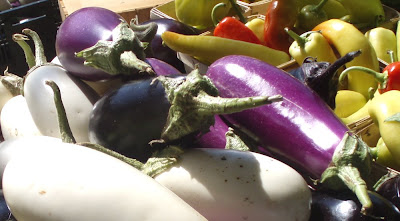 Eggplant is in season, and I've enjoyed a few favorites this year. I love eggplant's multiculturalism: it's in cuisines everywhere in the Mediterranean, southeast Asia, China, and maybe elsewhere. Or as Evelyn added "Eggplant dips, dishes, and sandwiches are ubiquitous in practically any fast food court or restaurant with vegetarian options, and people eat it in middle eastern sit down restaurants all the time."

Last week on his Weber-grilling marathon, when I set up Len for 2 and a half hours of standing over a hot hardwood-charcoal fire, three eggplants made the agenda. (Along with 6 ears of corn, many peppers, and a 3 lb. tenderloin, which each had to be done separately.) Grilled till they collapsed, the little purple beauties were then made into baba ganoush with some tahini and other stuff. Good. Likewise ratatouille a couple of farmers market before that.

The food pundits have been busy writing about eggplant recently, though they've concentrated on why people DON'T like it. In Gourmet I was amused by Laura Shapiro's piece: Why Does America Hate Ratatouille? The author's premise is simple: Americans are never going to like eggplant, no matter how French it seems. "Unlike quiche," she writes, "which came over from France around the same time and quickly achieved stardom, ratatouille is still languishing on the edges of the everyday food world. "

It didn’t go upscale, like salade niçoise, which acquired fingerling potatoes and fresh tuna. Nor did it go downscale, like the doomed croissant, today a bleak emblem of food-court cuisine. Over the years, recipe-writers dreamed up all sorts of new angles—canned tomato sauce instead of tomatoes, frozen squash instead of summer’s fresh varieties, and every novel add-on they could think of including string beans, pumpkin, cumin, pesto, bacon, pimento-stuffed olives, and blankets of grated cheese. None of these innovations had any lasting impact. In fact, ratatouille has bypassed most of the usual milestones in the life of an American recipe. Quick ‘n’ easy versions did not take over the category. There was no ratatouille revival. It never became an icon of comfort food. Ratatouille—humble, graceless ratatouille—has defied culinary history.

Less amusing and more doctrineaire is an article in today's New York Times health section: The Misunderstood Eggplant. Just the title -- and designation in the health section -- suggest that both authors are on the same page.

"People do have strong feelings about eggplant. If they don’t like it, they usually cite its bitterness or heaviness," says this author. And citing Russ Parsons: "most eggplants are not bitter (even though they have every right to be after everything that has been said about them)."

The NYT recommends eating the purple skins of eggplant because of its excellent chemicals including an antioxidant called nasunin, a flavonoid of the type anthocyanin -- sort of a turn-off, no? And the author explains yet another way to make eggplant dishes more healthful. A technique to prevent eggplants in a frying pan from drinking their weight in oil. Instead of sauteing the article recommends oven roasting; the author suggests cutting them up first. Well, it might not taste the same.

The thing is, there are dishes that are good with roasted eggplant, but I'm not sure you should just make a substitution in a fried eggplant dish. In my own cooking, I prefer to roast whole eggplants with skin and stem intact in a very hot oven or in the microwave (it's quick!), but I like outdoor grilling best. I peel the tough, charred skin off later, despite the flavinoids.

Dire warning for roasting, nuking, or grilling whole eggplants: don't forget to stab each eggplant all over with a knife to let the steam escape. Years ago, I learned this lesson: I had one explode and leave its stringy pulp draped over my oven racks.

I'm not listening to these ways to recruit members to the I-hate-eggplant club. Though Evelyn says "I used to hate eggplant, and there's nothing wrong with hating it! But...Baba Ganoush is definitely more common than most of the dishes mentioned (other than croissant). I bet the New York Times writers are too snobby to ever go to a middle eastern or generic modern American place."
Posted by Mae Travels at 1:33 PM

Hah! I will definitely not join the Hate Eggplant club. Cos I love em' love em' love em. Fry em, Indonesian style with dried chilles and shrimps. Roasted it with olive oil and herbs. Baked em' with cheese......

Hi Mae!
Thank you so much for directing me to this wonderful post. I really enjoyed it!