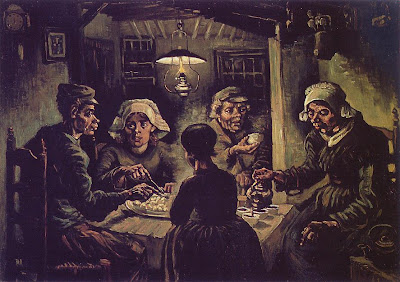 Centuries after the Dutch Golden Age, the Netherlands was home to another painter who captured the world's imagination: Vincent Van Gough. In his early life, he lived and painted among the poor of his native country. The humble meal, eaten at the kitchen table, certainly resonates with the centuries' earlier paintings of humble people eating simple meals. Just one thing: the potato was a New World vegetable, that became the staple dish of the poor somewhat later than the Golden Age. "The Potato Eaters" -- from 1885 -- is often contrasted in theme and color palate to Van Gough's creations from the south of France, painted a few years later in his very short life. For example this painting, "Cafe Terrace at Night" has a completely different feel to it. People are eating, to be sure, but Van Gough is no longer celebrating them as he did the humble potato eaters.

I LOVE The Potato Eaters. My father was an art historian and his main passion was Camille Pissarro, exactly because he painted common people doing common things. I don't mean "common" as in any kind of derogatory connotation, I just mean everyday activities. That's what fascinated him.

I also love Pissaro, but I haven't included him in any blogging to date. I like his subject matter, but I also like him because he was such an incredible master of impressionist effects. From across a room, a Pissaro painting reveals an entirely different scene than you see close up.

I'm learning so much about art from this series of posts.