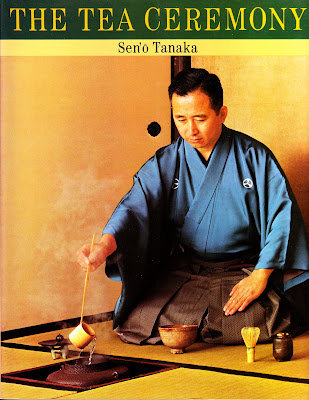 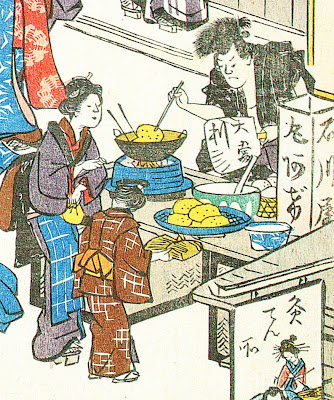 Austere simplicity in visual design characterizes many Japanese arts. The beauty in simple arrangement of Japanese food -- sushi and many other traditional dishes -- has made it a model for many modern cooks. What about the kitchens where these striking plates are created? For example, is a tea-ceremony room a kitchen?

The tea master ritually prepared tea in a purpose-built room or garden space, using special kettles, cups, storage vessels, and bowls. Every item and gesture was full of meaning. I don't think you could call this a kitchen: it was more like a performance space. The master made only tea; even the small, austere bits of food served sometimes with the tea had to come from elsewhere. Eating and drinking was ritualized to an extreme point. A full meal including tea was called a Kaiseki dinner; however, the kitchen/food preparation area was never visible to the diners, only the key actions of taking out the tea leaves, stirring the pot, and pouring tea into the chosen tea bowl.

Real kitchens, though, were part of the landscape in old Japan. Street vendors appear in various depictions of festivals in many eras. The vendors prepared food and sold it to the crowds. In the image to the right/above, you can see such a stall, as depicted by the wood-block artist Hiroshige (1797-1858).

Below you can see the entire scene. Shoppers at the market could buy goods like cloth, have their hair done, or have a snack just prepared in a large wok on a small open fire. 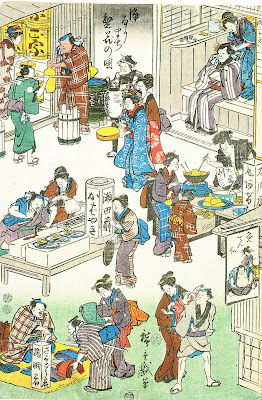 Similarly, compact food stalls -- kitchens visible -- sell snacks or small meals in today's urban Japan. The next picture, from A Day in the Life of Japan (June 7, 1985), shows a tiled kitchen where chicken skewers are being offered to late-night travelers. It's 11:30 PM: almost the final photo in the book. 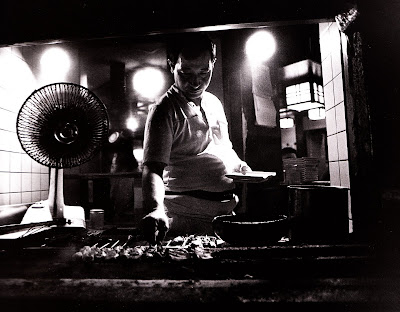 Photographers love to make images of the remnants of traditional activities in Japan. Also from Day in the Life, the following shows a woman wearing traditional fabric, cooking an octopus in a picturesque tub. It's not really focused on the kitchen, but it's a start at imagining traditional Japanese cooking space. 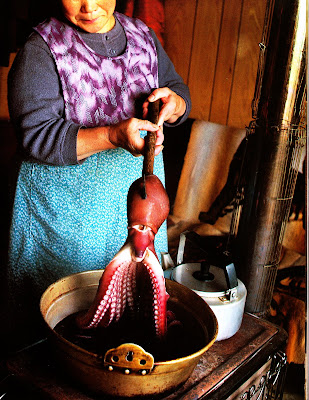 A kamado is the stove in a traditional Japanese kitchen, made of adobe, used to boil water for rice and vegetables. Fire was always a terrible danger, since Japanese homes were made of wood with room dividers of paper screens. Disastrous fires sometimes burned whole neighborhoods or cities, most famously the fire after the 1923 earthquake in Tokyo that killed around 100,000 people. I assume these ovens were made in such a way as to help contain the danger. Below are two such ovens, in museum-type homes: 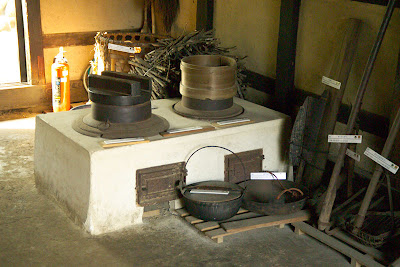 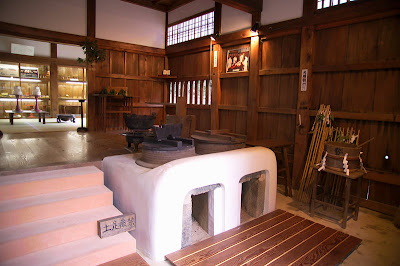 Before modern times, Japanese kitchens had simple stone or wood sinks and water storage vessels. Cooks sat on the floor to do most tasks. The image at left dates from the 1860s, from a book called Once Upon a Time: Visions of Old Japan. Next is a modern picture of an old-style kitchen sink in a wooden farmhouse. 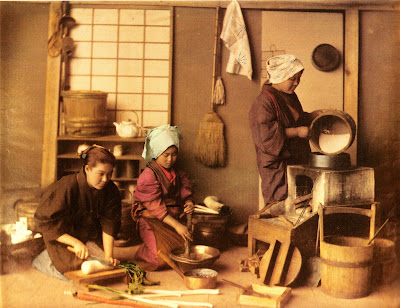 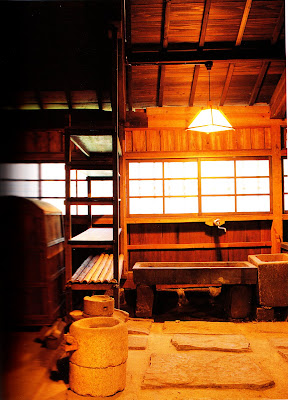