What's the opposite of nostalgia? 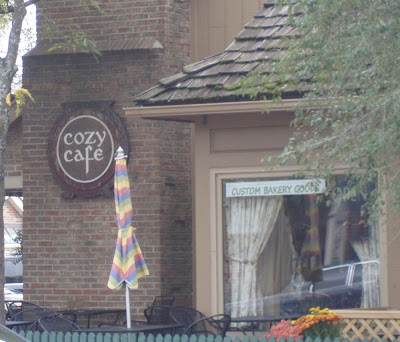 My friend Alice and I found ourselves in Plymouth at lunch time today. We looked into several bar/grille type places. No customers in any of them.

My general restaurant-choosing principle is that the most crowded place is probably getting its customers for a reason. Alice agreed, so we selected the Cozy Cafe, of which she also had a vague memory from past visits to Plymouth. We got one of the last tables in the section with the picture window. We didn't think there was any issue with the fact that all the other tables were occupied by our fellow-little-old-ladies. In Ann Arbor, our usual locale, everybody knows good food. You don't have to think about which demographic is causing the crowding. So we didn't think about it.

The Cozy chef did much too good a job of channeling my school cafeteria. On two slices of white bread, we found highly processed sliced turkey breast, not roasted recently. Jellied cranberry sauce was indented with can marks. The mashed potatoes might have been canned rather than dehydrated -- I might have detected a lump. That's the best I can say for them. And nice brown canned gravy oozed over all with a few sprinkles of parsley flakes. And a wilted lettuce leaf with a very thin slice of orange decoratively twisted onto it garnished the white oval plate. Oh, wasted youth, yes, that's what I ate.

When I saw "hot turkey sandwich" on a menu, I thought of those Thanksgiving lunches I liked at the elementary school. I recalled the Woolworths' and Walgreens' lunch counters in the Delmar Loop near the house where I grew up. My cousin Myrtle sometimes met me there and treated me to lunch and a limeade when I was in junior high and she was just out of high school with a job nearby. I was definitely remembering those sandwiches as something I liked. Today's lunch really made me face the difference between memory and reality.

When Alice and I talked later about the shock of seeing that processed turkey and gravy, I said I was trying hard not to imagine what was in the Mexican wrap.

Is there a lesson to be learned? I guess it's that Plymouth is not Ann Arbor. Except for the one store that brought me to Plymouth, the gift shops and antique shops there do not carry items that match my taste. As Alice said, "It's stuff." A crowded restaurant in this case is equal to no data.
Posted by Mae Travels at 4:51 PM