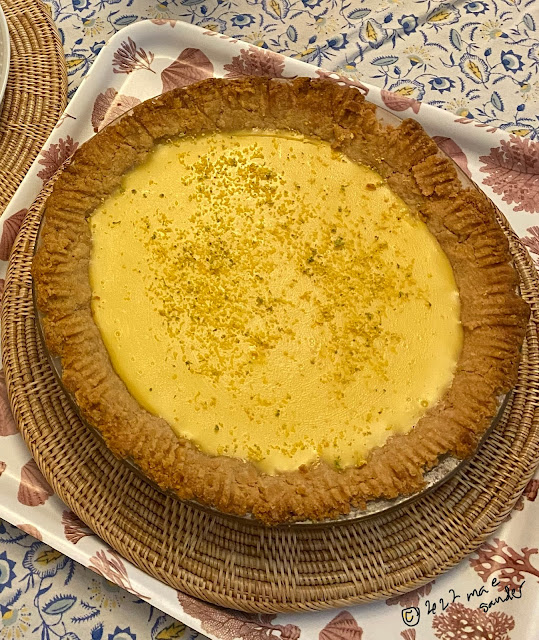 Lemon and lime flavored pie — how delicious! My friend Paula made a lovely pie for our dinner together, using the recipe from Southern Living Magazine. For the rest of the dinner see "Coq au Vin by Julia Child." 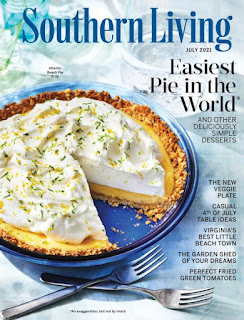 Paula made the crust from Ritz crackers, one of the choices for the cracker-crumb crust of this traditional pie. The filling contains sweetened condensed milk, lime and lemon juice, and other ingredients. (Recipe from Southern Living here).
The pie is delicious, and the story by restaurateur and recipe author Bill Smith is very amusing. He based his pie on a frequently-served dessert in southern seafood restaurants — served for an unexpected reason. Smith wrote:

“When I was growing up in New Bern in the ’50s, people believed as absolute truth that if you ate dessert after a meal of seafood, you would probably die. In the back of my mind, I thought that maybe this rule was just a way to trick me into eating fewer sweets. There was one exception, though: lemon pie.

“If you asked why, you were told something about lemon and fish. Therefore, many seafood restaurants on North Carolina’s coast served Atlantic Beach Lemon Pie, if no other dessert.” (source)

Bill Smith's recipe for Atlantic Beach Pie is now widely famous. The dish is very popular in his restaurant, and has featured in a number of stories on NPR and in online and printed food publications.

Paula has made the pie a few times, and recently, she made one for Mary and Marty, our other guests. They gave a part of the pie to their son. He was just about to eat a slice of pie. He put it down on a low surface for a moment, turning his back to the pie -- and also not paying close attention to his 11-month old son who was nearby. When he turned around to eat the pie, he saw that his son had speedily climbed up to where it was. The plate was empty. The baby had lemon filling smeared on his face, having eaten up the whole slice. That's how good it is!

Hello,
The pie looks delicious, I love anything with lemon.

Yum. It looks so good.
www.rsrue.blogspot.com

That looks like a great end to any meal.

The filling sounds familiar and delicious. I love the idea of a Ritz crust -- that saltiness would be a nice contrast to the sweet of the pie.

I have never heard of Ritz cracker crust. The pie sure looks good. I love lemon anything.

This Collage at the Besinnung is fantastisc. Neuer Header befreit of Madeleine Bourdouxhe. It seems very interesting and I read with great fun about this novel.

Thank you for sharing.

Have a good week.

This pie looks really delicious! And a fun anecdote to accompany the pic!