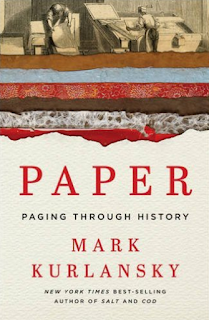 Mark Kurlansky is best known for his single-topic food books such as Salt: A World History, Cod: A Biography of the Fish That Changed the World, and Birdseye: The Adventures of a Curious Man. He's credited with popularizing and partially inventing a style of histories centered on a single food. I've enjoyed these books, and have now turned to his just-published book Paper: Paging through History.

Paper starts by exploring the origins of writing and the various media used for recording -- clay and stone tablets, wax tablets, animal skins/parchment, papyrus, and paper. Although I have only read part of the book, I'm finding it very enjoyable.

One passage about early writing and paper use especially struck me: a discussion of food books, cookbooks, and food writing in the ancient and medieval eras:


"Food was a favorite topic in the Arab world. Literary anthologies often contained a few pieces on culinary topics. Many poems, often commissioned by aristocrats, were written about the subject, and certain poets became celebrated food poets. Prose writing on food was also common. In fact, some intellectuals complained that there was too much of it. The eighth-century Abd al-Quddus... once complained, 'If you write about fish and vegetables, you garner much merit in [the public's] eyes, but if you expound truly scientific subjects, they find it irksome and boring.'" (p. 62-63)

It's always fun to see that new ideas are really old!
Posted by Mae Travels at 7:54 AM

As you might expect, anything with paper as a title would attract my attention! I've not heard of this but it looks fun for all sorts of reasons! Lots to learn from it!