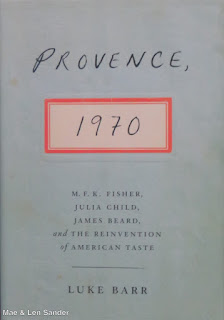 M.F.K. Fisher is one of the most respected food authors in American history. In 1970, accompanied by her sister Norah, she revisited a number of her favorite places in France, subjects of her very successful books.

In Provence, she visited several of her friends: Julia and Paul Child, Child's coauthor Simone Beck and her husband; Child's editor Judith Jones and her husband; James Beard; and Richard Olney, another cookbook author. Visiting the Provencal homes of Julia and Paul Child and some of the others, M.F. (as she's called in the book) cooked and shared meals which continued into long evenings of conversation.

Provence, 1970 tells the history of a special moment in history through cookbooks and food authors, which is in itself an interesting thing to do. Author Luke Barr makes the claim that these key food and cookbook authors invented a new American attitude towards cuisine and cookbooks during these encounters. I'm not really convinced by his claim, which he restates often and in many ways, but never persuasively shows that the changes in American cuisine and cookbooks was in any way caused by the events he described.

I did find a lot of things to enjoy in reading the book. I especially loved that quite a bit of M.F.'s tourism described in the book took place in the exact places I visited last month. The numerous descriptions of menus, dishes, and their preparations (quoted or paraphrased from M.F. I assume) are so vivid you feel as if you are at the table with a morsel in your mouth. And my favorite section was essentially a diversion from his main point -- a chapter on memories of the first meal each of the main characters in the book had in France.


A unique and valuable source fed this narrative: M.F.'s own diary of her 1970-1971 trip. Barr is M.F.'s great-nephew (his grandmother Norah was the travel companion for the first part of M.F.'s trip), and a few years ago, preparing to write this book, he found the diary in a private family archive belonging to one of M.F.'s daughters. Barr's presentation of M.F.'s thoughts from the diary is augmented by material from other sources, such as Julia Child's memoir My Life in France, and Judith Jones's autobiography The Tenth Muse (both of which I've read).

Did American cookbooks and interest in cooking change because these authors made it change? Barr's point that excessive reverence for French cuisine was diminishing at that point, thanks in a large part to a new attitude on the part of the immensely influential and popular Julia Child. In the winter of 1970, Child and Beck had the second volume of Mastering the Art of French Cooking in press, having just worked through a massive and painful editing process with Judith Jones.

Child, though, was changing: her "aversion to snobbery was deeply ingrained, reflected in her whole persona, her slightly comic, encouraging patter on television, her no-nonsense practicality, her warmth.... Child was ready to turn the page on the retrograde attitudes and old-fashioned ideas. American food was changing and she was ready to embrace that change." (Provence, 1970, p. 133)

James Beard, who had been amazingly influential and popular himself to that point (witness: he's one of the chefs with his own postage stamp), was just about to complete a book on American cooking. Though he was in France for a stay at a weight-loss and health improvement spa, he took time off to visit with the group, and appears to have agreed with them in assessing trends in American culinary affairs.

Richard Olney, who is now only known to the most diligent of cookbook fanatics, had just published a book on classical French cooking. Barr says that though a good cookbook author, Olney was out of step with the trend -- of all these authors he's the only one completely unrepresented in my own library, which suggests how he didn't quite make it into the canon. From Olney's New York Times obituary: "Mr. Olney's most important disciple was Alice Waters, who keeps a jacketless, food-stained copy of 'Simple French Food' in the kitchen of her celebrated restaurant, Chez Panisse, in Berkeley, Calif. " (NYT, August 4, 1999)

Barr's accounts of these important authors' conversations and their inner thoughts (based on the sources I've mentioned, especially the diary) is insightful, especially with respect to their varied views on taste, style, and authenticity. His establishment of their importance in American food writing and cookbook writing is believable and useful. His description of American popular culture concerning French cuisine and modern cooking is reasonably accurate, I thought. He does present a lot of evidence that the change in these authors' views reflected an overall change in American culture coming from many sources. And though the writing in Provence, 1970 is sometimes maddeningly repetitive, it's still pretty readable.

But every one of these authors was already prepared to change before their shared time in Provence, he shows, in a way contradicting his own claim. Julia Child had clearly decided before this meeting that she would no longer co-author books with Beck. She knew that her later books would be less reverent about French food -- her next one, From Julia Child's Kitchen was indeed more relaxed, and her TV show began to include more non-French recipes. Barr himself documents that she was already planning these changes. Judith Jones, before the Provence dinners, had been trying to convince Beck to write a book of her own, though the final agreement seems to have occurred during their stay. Beard had never been that reverent anyway. And Olney was, as I said, out of step.

In sum, Provence, 1970 is a rather flawed book. However, I enjoyed it quite a bit even though I don't at all believe its central thesis is proved by the material in the book.

Provence, 1970 is the next selection for my culinary reading group, and I'm also looking forward to what the other group participants will have to say about it. I wrote more about M.F.K. Fisher HERE.

That's an interesting question....so glad your continuing your Francophile theme with Cookbook Wednesday.

I should read this book. I clearly remember when Julia Child hit American TV, and she really did change things. One day everybody thought grilled steak was the best thing one could serve to company. Two years later beef burgundy was the dish everyone HAD to make. She certainly changed my life. I was maybe 12 or 13 when she appeared on the American scene, but she opened my eyes to food as pleasure and culture, and not only a fuel. James Beard was an icon back then, but he wrote "recipes." Julia Child wrote about approach and procedure, and the importance of treating ingredients with respect. BTW, have you ever read _The Taste of America_ by John L. Hess and Karen Hess? (He was a NY Times write, lived in Paris in the 60s, and I believe in the 70s was restaurant critic for them or something similar.) They lived through that period, and weren't big fans of Child. I think they'd agree more with you. Anyway, great read -- thanks.

Looks like this book may need to be my next read also, Mae. I haven't been able to join in on the general consensus that the approach to American cooking was changed by many of these authors. Granted, Mastering the Art of French Cooking did revolutionize American kitchens by making French food more accessible but I'm not sure it would have happened at that time had it not been for her position in life and her formal education in advertising and publicity.

I am familiar with all of the authors you have mentioned in this wonderful review Mae. I too have a few of their books. I'd be curious to read this book with author's books in hand to see if my feeling is the same as the authors from an unbiased point of view.

This was a great read Mae. I really appreciate you sharing this book with us for Cookbook Wednesday. I'm sure you had a few French pangs while reviewing it:)

I hate to admit this in public because you know I like to cook -- but I've never read MFK Fisher. I know. I should. But hearing about this (and other things in the past) make me realize I must pick up that baton and dive in!