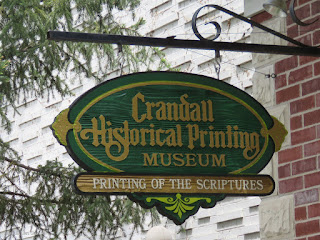 According to the Crandall Historical Printing Museum in Provo, Utah, the most momentous events in printing history are:

The museum has an accurate replica of the printing presses and much of the other technology used for printing each of these documents.
The one-hour tour of the four rooms of the museum includes a detailed explanation of the technology, which changed extremely little in the nearly 400 years covered. The casting of type; typesetting; placement of type and blank paper in the press; inking the type; drying, folding and cutting the printed sheets; gathering the signatures -- that is, groups of pages; sewing them together; and binding the books are all parts of the lecture-demonstration.

A replica of a Gutenberg Bible and of several of the other documents are on view, including a copy of the hieroglyphic plates that were translated by Joseph Smith and a copy of his manuscript that was sent to the printer in Palmyra, New York, in 1829 and completed in 1830.

Two quite elderly men who run the museum present all the material; both had a long career in printing before they established the museum around 20 years ago. The time it took to print the 5000 copies of the Book of Mormon ordered by Joseph Smith was seven months, which the lecturer says would have been impossible. He "testifies" that only an act of God could have made this timing possible.

Lunch: Cooked by a Navajo Chef