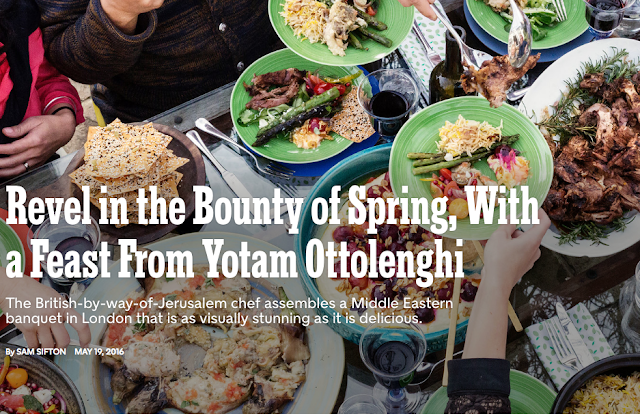 Yotam Ottolenghi has many fans, including me. I often read his cooking column in the Guardian. Currently in the New York Times: an article -- including recipes -- about a dinner he prepared for friends. Times writer Sam Sifton includes Ottolenghi's suggestions for making the food look good, making it taste good, and making sure the food arrives at the table in good shape for optimum enjoyment.


"The first thing Yotam Ottolenghi did before he began cooking a late-afternoon feast for family and friends — before sliding the lamb into the oven, before building four salads, before assembling an immense layer cake, before he even started to sort through the mountain of ingredients stacked on the kitchen counters — was to take a look at the china on which the food would eventually be served. 'Food styling is what I do best,' he said. 'So I start at the end, with the plates and platters. And then I start to cook.'"

A very nice article!
Posted by Mae Travels at 1:33 PM

I agree with Beth, great opening paragraph. The descriptions of the dinner to come is mouth watering!

I love my Fiesta ware because it makes so fun to choose a color based on what looks good with the dish.

Great article! I had not gotten around to reading the NYT food section this week and your post had me headed right over for a skim of it. I'll go back for a complete reread tonight.

Oh to be a friend invited to dinner by the master! ;-) Thanks for sharing.

I love his ideas on cooking, and that is so true, how it looks on the plate affects our perception of the dish and our appetite as well.

I need to put some work into food styling! Have a great week. Cheers from Carole's Chatter!

Now I want to get rid of all my old, inexpensive plates and get all new china! He's a fascinating chef to hear about.

I think I love this man. My kind of planning!

My sister-in-law does the same thing.