On Not Using Cookbooks

It's Cookbook Wednesday again, but my meandering thoughts have taken me to another world: a world without cookbooks. As you might guess, I mean the World Wide Web and all its wonders. Youtube. Allrecipes. Epicurious. Online magazines. Food blogs!

To start off: here's a screen shot of the top page of Allrecipes.com, probably the most popular recipe site on the web: 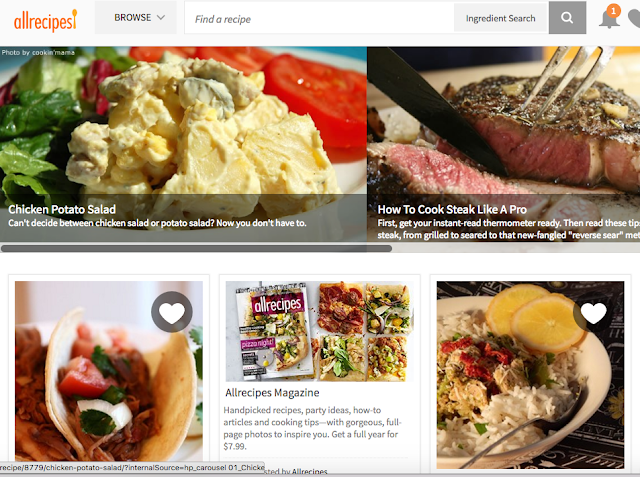 A recent article, "If You Are What You Eat, America Is Allrecipes" by Nicholas Hune-Brown, summarized Allrecipes and its approach to cooking:


"While rival website Epicurious culls recipes from Bon Appétit and the now-defunct Gourmet, Allrecipes takes crowdsourced creations from home cooks and then writes them up in standardized form. In the era of the ornate food description, Allrecipes favors a house style shorn of ostentation. ... And at a time when readers of aspirational food websites are used to images of impossibly perfect dishes—each microgreen artfully placed by some tweezer-wielding stylist—Allrecipes offers amateur snaps of amateur meals."

The article explains how Allrecipes carefully cultivates their down-home unpretentiousness, and also how the site makes sure that its recipes come up on top of google searches. The folks at Allrecipies know how to please home cooks, and they know how to game the search engine!

In my own experience, when I check the web for a recipe I definitely see Allrecipes near or at the top of the screen most of the time. While I am very careless about noticing where any particular recipe comes from, I'm sure I've tried some from Allrecipes -- as much as I ever try a recipe exactly. Let's say, I reinterpret their recipes from time to time. Specifically, when I wanted to make lasagna, the Epicurious recipe looked quite a bit more appetizing than the Allrecipes one.

Youtube no doubt offers millions of hands-off cooking demos -- you watch, your hands stay clean. In fact, Youtube cooking videos -- notably those from Buzzfeed -- are always full of hands doing things even though your own hands are not involved.

Maybe "Tasty" videos are in fact teaching cooking, or maybe they're just providing entertainment. My granddaughter Alice, who has been watching real instructional Youtube cooking videos since she was around 9 years old, says she watched "all of them" in one great binge. Recently, the Washington Post did kind of a sendup of "Tasty" and other speeded up cooking videos: "Hands and bowls and melty cheese! Why does every Web recipe video look the same?" by Maura Judkis. She says:


"The videos, all shot from directly overhead, alternate between fast and slow motion, never show more than the cook’s hands, and annotate each step in bold typography. They use jangly, royalty-free music, but work just as well without sound. They typically last only a minute or less, to capture fickle attention spans ... Foods are stuffed inside other foods, then frequently described as a “bomb.” Cheese is a major player. ... And don’t forget the rainbow sprinkles. In the case of the Tasty videos, they all end with the phrase 'Ohhh yesss.'

Of course there were once long ago other ways to get recipes without cookbooks. You could watch the Food Network or PBS food shows. Or read women's magazines or the now-defunct Gourmet. How retro!

And you could always ask an actual person for a recipe. My mother, for example, made a habit of telephoning friends that she thought were good cooks when she wanted to make something new. I have a folder of her very yellowed notes with recipes frequently including the name of the person who gave her the recipe.

Before the telephone, I've heard that people even learned to cook by just watching their mothers or grandmothers make things. Oh, wait, that's what I love to do with my granddaughters, and what I did with my daughter. Some things might be eternal, including cookbooks and lots of others.

Cookbook Wednesday is a blogging event organized by Louise at Months of Edible Celebrations. I still love cookbooks, buy new special ones frequently, read them as if they were narratives or novels, enjoy cookbook reviews that other bloggers write, and even sometimes make recipes from them. But I also get a lot of new ideas from the new sources.

I've never used an Allrecipe recipe. I've glanced at a few, but didn't like them for whatever reason, so have crossed them off as a source. And I never look at videos -- they take way too much time. I can read a recipe so much faster. But I usually use recipes as springboards, anyway -- I'm always changing things up. Which is good sometimes, and sometimes not! Anyway, really interesting post -- thanks.

I'm not an Allrecipe kinda gal either Mae. I'm not sure why because I think they have changed the format from many years ago; perhaps since Meredith Corporation took over. I don't do videos or TV shows either for that matter. Well, occasionally I will watch Chopped and Martha Bakes if I'm flipping through stations late at night.

I don't think there is anything wrong with using online recipes and adapting them though. How can you argue with the fact that Alice is taking in YouTube videos and binging on them. Anyway kids learn to appreciate cooking whether at apron strings or videos is all fine and good with me:)

In a pinch I will do a recipe search but I usually try to "flip" through the first couple of pages that come up and go to less popular sites. (or should I say lower in Google rank for what ever reason)

Thanks for sharing this perspective on Cookbook Wednesday Mae. I found it quite refreshing:)

I have boatloads of cookbooks, scrawled recipes, things copied from telly, magazine clips and still find myself going to the internet for something fast! That said, once I get it, I rarely make it as written (apart from baking and even that may get a variation or two but nothing to upset the chemistry!).

I have my great grandfather's recipe book which I'm hoping to scan soon and share his recipe for opium lozenges. It uses 4 oz. of opium and a pint of water, two kettles of almonds... on the next page are Marshmallow drops!

I do have my cookbook faves though. Some are older ones (my old Junior League cookbook), Julia, Ina, and I love the America's test kitchen series, along with a few others. Oh, and the King Arthur Flour Baking Encyclopedia! After all, I have 'em, better use 'em!