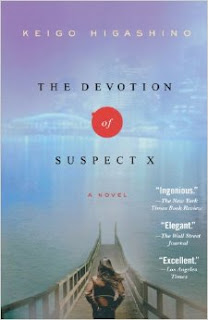 The Devotion of Suspect X by Keigo Higashino is an impressively well-plotted police procedural. Throughout the novel, Yasuko, a former bar girl who works in a bento shop and her teenage daughter Misato try to lead a normal life to prevent the police from knowing that they are guilty of murder. One way they do this is to agree to eat in restaurants when they don’t feel like it, as indicated in the quotation.

The intense characterization of Yasuko, Misato, and several other characters goes beyond what's usual in detective fiction. The characters all live in Tokyo where the action takes place. Besides the two already mentioned they are:
As always, I was interested in the way that food is used to create the atmosphere, delineate the characters, and advance the plot in a mystery novel. First, there's the bento shop where Yasuko works. Ishigami has made a habit of buying his lunch there: specifically whenever he knew she was there, usually asking for “the special” which is not further described. He used it as a way to have frequent though brief contact with her. After the murder, helping her to cover up provides him with a whole new way to interact with her and (he hopes) to win her affection.

Yasuko works at the counter of the shop and also helps in the kitchen; this work becomes an important background to her efforts to avoid having the police verify their suspicions of her. As she becomes more and more nervous, her behavior at the shop helps convey suspense to the reader: “Yasuko passed a fried chicken meal across the counter to the last customer in line and glanced up at the clock. Only a few minutes until six.” (p. 265).

We learn more about her when she eats in restaurants with Kudo, a man who was once her customer when she was a bar girl, and who reappears in her life during the investigation. “They had eaten the last of the shrimp, and the wine bottle was empty. Yasuko drank the last sip of wine from her glass and breathed a sigh of contentment. She couldn’t remember the last time she had been out for real Italian food.” (p. 127).

Her daughter, in contrast, is uncomfortable in such places; when her former client asks to include Misato at their next meeting  Yasuko says: “I don’t know. I think she prefers watching TV and eating pizza to a place like this. She’s not fond of formal dining — or anything else where you have to act proper.” (p. 129)


Later she thinks: “You can drag a teenager to a good restaurant, but you can’t make her enjoy it.” With her admirer, she and her daughter “had come to a Chinese place in Ginza for dinner. Kudo had insisted that Yasuko bring her daughter, and so she had dragged Misato along, despite the girl’s protests. In the end, Yasuko had convinced her to come by telling her that it would seem unnatural for them to avoid going out — that it might make the police suspicious.” (pp. 226-227).

Yasuko and Misato themselves do not know what their neighbor did to protect them and create an alibi for them. Thus, the primary mystery throughout the book is WHAT DID ISHIGAMI DO TO CONCEAL THE MURDER? We know the result of his work as detail after detail is discovered by the police and analyzed by "Galileo," but only at the end do we learn what really happened (no spoilers here, though).

I plan to read more in the Inspector Galileo series!

I have wanted to read this for so long! I loved his other book, the title of which escapes me now!, but Japanese thrillers are so interesting, and Higashino does not let me down. So glad you are joining the Japanese Literature Challenge 10! It's good to have your input.